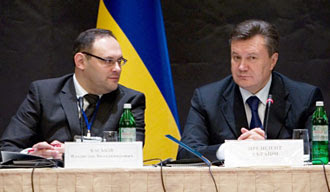 The Charles Stewart Mott Foundation has given grants to two Ukrainian election-monitoring organizations: the well known Committee of Voters of Ukraine (KVU) and the lesser known Opora. KVU obtained $200,000 in 2007 and $140,000 in 2010, while Opora received $100,000 in 2007 and again in 2009. Unfortunately, only funding given to Opora has been money well-spent.

KVU and Opora also received funding from the National Democratic Institute (NDI), but in the case of KVU, a decade-long relationship ended in the first two years following Viktor Yushchenko’s election. The reason was KVU’s financial shenanigans.

Opora grew out of the “black” wing (based on its symbols) of the Pora (It’s Time) youth NGO that modeled itself on Serbia’s Otpor and Georgia’s Kmara. The “yellow” wing of Pora, headed by Vladyslav Kaskiv, was a parody of the Serbian and Georgian youth NGOs, acting more as a vehicle for his political ambitions. Yellow Pora became a political party, but failed to enter parliament in 2006. It succeeded, however, in 2007 as one of nine parties in the Our Ukraine-Self Defense bloc.

After Yanukovych’s election, Pora leader Kaskiv defected to the new administration and joined the Nikolai Azarov government. It seems as though the KVU has also been bought.
The reputation of the KVU, which was stellar during its decade-long cooperation with NDI, deteriorated, ironically, during the Yushchenko presidency, when Ukraine held three free elections. Suspicions of corruption first surfaced during the pre-term March 2009 Ternopil oblast council election, which was endorsed by the KVU as “free” despite numerous, significant infringements. The KVU worked with Presidential Administration head Viktor Baloga, who used the Ternopil elections to ensure that the Yulia Tymoshenko Bloc received poor results (and in the same breath permitting the nationalist Svoboda party to win).

The link between KVU and Baloga was confirmed when KVU leader Ihor Popov was appointed deputy head of the Presidential Secretariat immediately after the Ternopil elections. The final proof of this relationship was evident this year when Popov was elected leader of the United Center party that Baloga established in 2008 to compete with Our Ukraine to become the president’s party of power.

This statement points to Chernenko’s biased work on behalf of the authorities, Ukrainian experts and journalists believe. Opora, other Ukrainian and foreign NGOs, the Ukrainian opposition, the U.S. Embassy and the Council of Europe, as well European Parliamentarians from all the major political groups (including the Socialists, with whom the Party of Regions signed a memorandum of cooperation last month), were highly critical of the October 31 elections and believed they were a step back from the free presidential elections held in January-February.

Even the Odesa branch of KVU stated that the local elections in their city had a greater number of violations than the infamous fraud in the 2004 elections that sparked the Orange Revolution. The Odesa election commission committed egregious violations that led to a “scandalous situation” in the city, Odesa’s KVU stated.

The Charles Stewart Mott foundation should investigate this blaring contradiction between the corrupted KVU and objective and unbiased Opora. The KVU’s reporting of the October 31 local elections shows that only Opora has proven that it is worthy of U.S. assistance.

The Jamestown Foundation is pleased to host a forthcoming webinar... END_OF_DOCUMENT_TOKEN_TO_BE_REPLACED

*A free e-book of this title is available for download below. Russia’s attack on Ukraine and the dismemberment of its territory is not an isolated operation. It constitutes one component of a broader strategic agenda to rebuild a Moscow-centered bloc designed to compete with the West. The acceleration of... END_OF_DOCUMENT_TOKEN_TO_BE_REPLACED