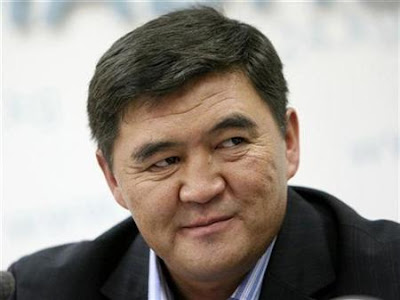 A new scandal is in the making inside Kyrgyzstan’s security services. Leader of the Ata-Jurt party, Kamchybek Tashiyev, is arguing that National Security Service (NSS) attempted to assassinate him last Saturday night in front of his own house in Bishkek. According to Tashiyev, NSS personnel deliberately provoked him in front of his house followed by a few armed NSS personnel shooting at his house and his guards.

After Tashiyev’s guards captured NSS attackers, Ata-Jurt’s official memo states, 15 more armed NSS staffers stormed the politician’s house. When the police and prosecutors arrived to the scene they also evidenced that NSS were involved in illegal activity, the memo states.

Head of NSS Keneshbek Dushebayev denies allegations and claims that members of his service were stationed in a car 200 meters away from Tashiyev’s house when Tashiyev’s guards dragged one of the NSS personnel from the car and beat him inside the politician’s house. According to Dushebayev, the remaining two officers tried to rescue their colleague but were beaten by over 40 of Tashiyev’s guards. NSS personnel were bound to fire shots into the sky to protect themselves, Dushebayev recounts.

Whose version – Tashiev or Dushebayev’s – is closer to the truth remains to be seen. However, the Ata-Jurt-NSS showdown reveals the infighting between former president Kurmanbek Bakiev’s loyal regime followers and the current government that is made up mostly of Bakiyev’s former opponents. Ata-Jurt has experienced pressure from the general prosecutor, Kubatbek Baibolov, who accused the party of instigating inter-ethnic hatred in the run-down to the October 10 parliamentary elections. During Bakiyev’s rein both Dushebayev and Baibolov, along with a number of other security officials, were pressured by the regime.

With pro-Bakiyev politicians now entering the parliament, tensions within security structures are better described between the legislative and executive branches. However, tensions are breeding between the General Prosecutor’s office, NSS, and other power ministries. All have been trading criticism about the lack of professionalism in maintaining order in the country, particularly during the June violence.

These showdowns inside power institutions will negatively impact lower-ranking personnel. Without coherent political leadership over armed and police forces, human rights abuses will continue to be entrenched in the everyday lives of locals, particularly in southern Kyrgyzstan.

Back
Yanukovych’s New Best Friend – Hugo ..Next
Pressing Issues Remain as the Zone of Ru..

The Jamestown Foundation is pleased to host a forthcoming webinar... END_OF_DOCUMENT_TOKEN_TO_BE_REPLACED

The August 2020 issue of Militant Leadership Monitor features a brief on the notorious kidnapper, Idang Susukan, who was recently arrested in the Philippines; an overview of the radical Kenyan cleric affecting al-Shabaab’s COVID-19 response in Somalia; a look at Ahmad Nishwan, a Maldivian insurgent who was recently eulogized... END_OF_DOCUMENT_TOKEN_TO_BE_REPLACED