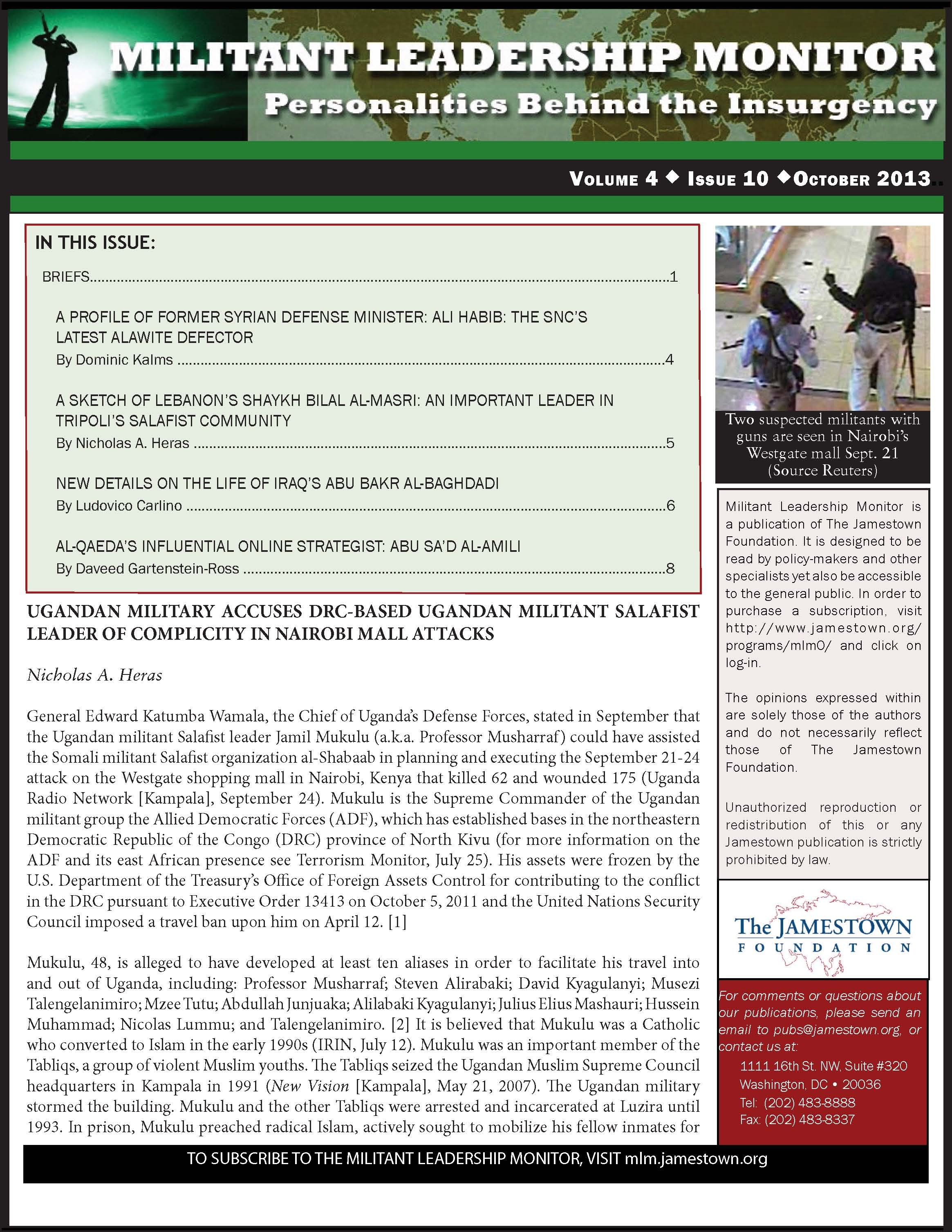 The October Issue of Militant Leadership Monitor features two briefs by Nicholas A. Heras. The first focuses on Ugandan militant Salafist leader Jamil Mukuli who has been accused of complicity in the attack on Westgate shopping mall in Nairobi, Kenya. The second brief concerns Shaykh Muhammad Zahran Alloush who was recently declared the General Commander of Liwa al-Islam (the Islamic Brigades). Dominic Kalms provides the first profile of General Ali Habib, the highest ranking official to defect from Syrian President Bashar al-Assad’s regime. A sketch follows by Nicholas A. Heras of Lebanese Salafist leader Shaykh Bilal al-Masri. Next, Ludovico Carlino takes an in-depth look at Amir Abu Bakr al-Baghdadi of the Islamic State of Iraq and al-Sham and his relationship with al-Zawahiri. The concluding profile by Daveed Gartenstein-Ross is of al-Qaeda’s influential online strategist Abu Sa’d al-Amili.

The April issue of Militant Leadership Monitor begins with a profile of Maysar Ali Al-Jabouri, a Jabhat al-Nusra amir who is encouraging the split between al-Nusra and ISIS in Syria. This is followed with the next brief covering the connection between anti-balaka militias and Patrice Edouard Ngaissona in the Central African Republic.... MORE
$20.00 – $25.00 Select options
This issue of Militant Leadership Monitor begins with two Briefs, covering Congo's M23 leader Sultani Makenga and Malian Militant Cheibane Ould Hama. The issue continues with a small montage of leaders to watch in post-Mursi Egypt, by Michael W.S. Ryan. Dominic Kalms provides an in-depth... MORE
$20.00 – $25.00 Select options
In this Quarterly Special Report (QSR) on the conflict in South Sudan, we focus on the civil wars, border disputes and rivalries between ethnic groups that have resulted in over half a century of violence in the country. The QSR begins with an overview by... MORE
$20.00 – $25.00 Select options
The March issue of Militant Leadership Monitor begins with an update on the efforts of Abu Ayman al-Iraqi, a deputy of ISIS commander Abu Bakr al-Baghdadi, in Eastern Syria. This is followed with a profile of Muhammad Ali Tambako and his expulsion as the vice-chairman... MORE
$20.00 – $25.00 Select options

On November 11, the Kremlin announced the completion of... END_OF_DOCUMENT_TOKEN_TO_BE_REPLACED

On November 17, Jamestown Foundation Senior Fellow Olevs Nikers was interviewed by Romania-based outlet Veridica regarding, among other topics, the best possible outcome for the... END_OF_DOCUMENT_TOKEN_TO_BE_REPLACED