Today, July 25, Turkish Foreign Minister Abdullah Gul today refused to confirm that he would withdraw as a candidate for the country’s presidency when parliament meets in early August 2007 to elect a successor to the incumbent, Ahmet Necdet Sezer.

“I cannot ignore the will of the people which was expressed during the election campaign and in the elections of July 22,” he said (NTV, July 25). However, Gul avoided explicitly confirming that he would be a candidate in August.

“There is still a lot of time. We shall all make our evaluations and do whatever is needed to make Turkey stronger,” he said (NTV, July 25).

Gul’s announcement came one day after Prime Minister Tayyip Erdogan pledged that his recently re-elected Justice and Development Party (AKP) would ensure that the presidential elections do not result in a repeat of the tensions of April 2007, when the AKP’s attempts to appoint Gul as president triggered a confrontation with Turkey’s powerful military, which doubted Gul’s commitment to the principle of secularism enshrined in the country’s constitution. In response, the AKP called early elections on July 22, over three months ahead of schedule.

“We shall not allow any kind of tensions,” said Erdogan. “We shall solve problems through cooperation and compromise” (CNNTurk, July 24).

Erdogan was speaking at the AKP National Executive Committee’s first meeting since the party’s landslide election victory on Sunday. The latest unofficial results suggest that the AKP won 46.8% of the popular vote, giving it 341 seats in Turkey’s 550-member unicameral parliament.

For many in the AKP, the magnitude of the party’s victory was a direct rebuff to the military’s intervention in the political arena. “In the July 22 elections the people demonstrated that politics must be conducted by politicians,” said Deputy Prime Minister Ali Sahin (Milliyet, July 25). On the night of July 22, when Erdogan addressed party supporters celebrating outside the AKP’s headquarters in Ankara, his speech was frequently interrupted by chants of “President Gul” and “the Presidential Palace is ours and ours it shall remain!” (NTV, July 22).

In the days that followed, several leading members of the AKP publicly declared their support for Gul’s candidacy. “He is the best candidate,” said Parliamentary Speaker Bulent Arinc (Milliyet, July 25).

But there was also an awareness that, as Turkish law currently requires any candidate to have at least the tacit support of two-thirds of the members of parliament, the party would probably have to find a compromise candidate acceptable both to the military and to the opposition. Although the Turkish General Staff (TGS) has deliberately adopted a very low public profile, prominent retired officers with close links to the current command have made it clear that, if necessary, the military will again intervene to prevent an unsuitable candidate being appointed to the presidency.

“If there is a hitch in the naming of the president, then the military will intervene again,” said retired General Edip Baser. “But I don’t believe that Prime Minister Erdogan will allow the situation to become critical” (Anatolian Agency, July 24).

In recent years, the Turkish president has usually been chosen from among the current members of parliament. Sezer, a former judge, is a notable exception. The Turkish press has discussed the possibility of the AKP putting forward a conciliatory figure from outside parliament who has no formal links to the party, including former chief of staff General Hilmi Ozkok (Dunya, July 24).

However, in conversations with Jamestown, members of the AKP have been insistent that, in order to placate the party’s supporters, the candidate would have to be a sitting AKP member of parliament (July 24). They suggested that one possibility would be for the AKP to put forward two or three possible candidates from the more moderate wing of the party and allow the parliamentary opposition to choose which one to support. A key consideration is likely to be whether or not any of the male candidates’ wives wear the Islamic headscarf. One of the main reasons for the military’s opposition to Gul was that his wife covers her head. To most hard-line Turkish secularists, including the military, the presence in the presidential palace of a headscarfed first lady would, in itself, be a violation of secularism.

If the government and the opposition parties cannot agree on a presidential candidate within 30 days of the new parliament being formally convened, then the assembly will have to be dissolved and fresh elections held. However, there is a general awareness that holding two general elections within a few months could severely damage foreign investor confidence. A huge increase in foreign investment was one of the main factors underpinning the economic boom of the AKP’s first term in power. Foreigners also now hold over 70% of the free float on the Istanbul Stock Exchange and their continued presence is key to sustained economic stability (Radikal, July 23). 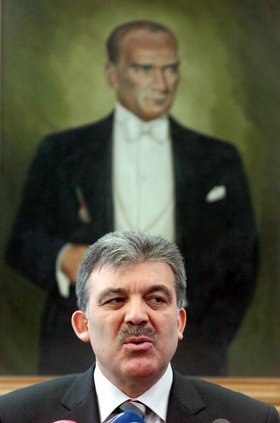