Georgian Defense Minister Tina Khidasheli signed a decree, on June 26, effectively abolishing military conscription by the Ministry of Defense (MoD). The decree applies only to the MoD and hence, to only 25 percent of the country’s conscripts. The remaining 75 percent of recruits were and will continue to be called up by other government agencies, including the Ministry of Interior, the State Security Agency, Special State Protection Service, the penitentiary system and the intelligence service (Civil Georgia, June 26).

Nevertheless, the decree caused an uproar within the Georgian political establishment, though not for reasons most outside observers would have expected. The abolishment of conscription and the switch to entirely contract-based military service had long been debated among the country’s political elites (see EDM, April 29). Subsequently, the June 26 decree should theoretically have facilitated at least modest discussions about the pros and cons of moving to an all-professional force. However, the ruling elites, among them President Giorgi Margvelashvili, Prime Minister Giorgi Kvirikashvili and the ruling Georgian Dream (GD) party, seemed more angered by the fact that Minister Khidasheli took the decision unilaterally, without first consulting the government and the National Security Council (Kvira.ge, June 29).

Khidasheli did not sound fully confident when she described why scrapping conscription was potentially good for the country and, generally, why its abolishment was necessary. She somewhat boastfully declared that the Georgian Armed Forces did not need servicemen brought in on a compulsory basis, as there was high demand to join the army on a contract basis because military service was considered prestigious (Trt.net.tr, June 27; Kvira.ge, June 29). Additionally, the defense minister later stated she misspoke when saying that she unilaterally took the decision about abolishing conscription. She blamed Georgia’s sweltering summer heat for that supposed slip of the tongue (Tabula.ge, July 4).

In any case, it is not yet entirely clear what Georgia’s political and military officials are trying to achieve within the Georgian military in the medium and long term. Overall, the country’s leaders often emphasize that they look forward to increasing the army’s defense capabilities and making it more compatible with North Atlantic Treaty Organization (NATO) standards (Ipress.ge, June 27). However, all these claims sound more like a wish list than an actual roadmap to follow, as the leadership does not seem to be doing much in this direction. During the 2008 Russian-Georgian war, the Georgian army sustained massive losses in battle tanks and other military hardware. The war also exposed an utter lack of professionalism and coordination among the Georgian officer corps. Moreover, Georgia’s reserve army (as well as a large majority of the rest of the army) collapsed within a couple of days in the face of the rapidly advancing Russian military. The Georgian Armed Forces displayed not only a staggering lack of basic discipline, but also low combat readiness (see EDM, September 26, 2008).

Almost eight years since that war, none of these problems have been sufficiently solved. The Georgian military never really regained its pre-war strength in tanks and hardware. Also, there has not been any visible progress in improving the professionalism of the Georgian officer corps. And last but not least, the Georgian reserve army was never really reformed after the 2008 disaster. The government is currently promising a new, reformed Georgian Reserve Army service, but this promise has yet to materialize (Armada.ge, June 28).

Against all these problems, the defense minister’s fixation on the military draft seems a bit out of place. Certainly, abolishing conscription can free up financial resources, which can be used to shift the Armed Forces entirely to contract service. However, this would only make sense if it was accompanied by a strengthening of the country’s overall combat readiness—an element that is currently clearly missing in Georgia’s military reforms. Moreover, it is yet to be seen how abandoning conscription will affect the military education of ordinary citizens, a skill set arguably essential for a country with 20 percent of its territory under foreign armed occupation.

One bright spot in the Georgian military has been the recent United States–Georgia memorandum on deepening the bilateral defense and security partnership, signed on July 6. The document envisages assistance in the acquisition of defense and related articles for Georgia, in order to increase the country’s self-defense capabilities and improve its military forces’ combat level so that they are able to work with NATO forces. Moreover, it envisions more joint military exercises, training and threat assessments; cooperation in the exchange of information, as well as among operational and tactical personnel; and enhanced border, maritime and airspace security (Civil Georgia, July 6).

The defense cooperation memorandum and the official rhetoric surrounding it represent a deviation from US assistance programs of the past ten years, which mainly focused on preparing Georgian troops for overseas deployments and counter-insurgency tactics. For Tbilisi, the memorandum is a positive step in many ways, first of all in the future development of the Georgian army’s self-defense capabilities. Yet, it remains to be seen what types of weapons Georgia will actually be allowed to acquire as a result of this agreement. One of those most needed defensive weapons would be anti-tank Javelin missiles, which can greatly increase the Georgian army’s combat readiness and mobility against potential invaders with large numbers of tanks and armored vehicles. Other similar small weapons (for instance, anti-aircraft Stingers) could also greatly benefit the Georgian Armed Forces.

Overall, the Georgian government is still struggling with sufficiently reforming the country’s military, despite how far it has come. The defense ministry’s recent decision to abolish conscription seems largely out of place at this point. Meanwhile, it is yet to be seen how effectively Georgia’s authorities will be able to make use of the recently signed US-Georgia memorandum on defense cooperation. Presently, the country’s military capabilities do not offer a great deal of hope. 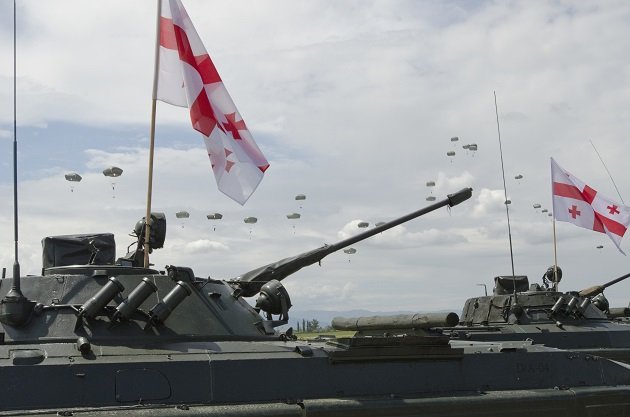 Back
Political Turmoil Erupts in Abkhazia as ..Next
Baltic Geography Presents Moscow With Th..

The Jamestown Foundation was proud to host a conference on... END_OF_DOCUMENT_TOKEN_TO_BE_REPLACED

On June 6, Jamestown’s President Glen E. Howard was quoted by Task and Purpose in an article on Russia’s Chechen fighters in Ukraine. END_OF_DOCUMENT_TOKEN_TO_BE_REPLACED

Pakistan’s Troubled Frontier is a gripping snapshot of the militants and movements threatening a region plunging into turmoil. This work represents an effort to examine the array of security issues threatening Pakistan’s volatile northwest frontier and should become an important reference for policy makers seeking greater insight into the region.... END_OF_DOCUMENT_TOKEN_TO_BE_REPLACED