On May 15, the Patriarch of the Russian Orthodox Church, Kirill, visited Kabardino-Balkaria for the first time. He was greeted in the republic with great pomp. The top Russian Orthodox cleric consecrated the Cathedral of Mary Magdalene and held a liturgy in Nalchik, the republic’s capital. The liturgy lasted for two hours and was broadcast live on local television. The republic’s governor, Yuri Kokov, praised the positive role of the Russian Orthodox Church and Kirill’s personal aptitude. The construction of the cathedral started on September 1, 2004, when Kabardino-Balkaria’s first president, Valery Kokov, was still in power. In 2012, painters started to decorate the cathedral’s interior, after which regular services began being held there (Kavkazsky Uzel, May 15).

At first glance, Kirill’s visit to Kabardino-Balkaria was purely humanitarian. However, the context of the visit suggests he may also have had political motives. His surprise trip to Nalchik came between the two dates Circassian activists mark every year—the Day of the Circassian Flag, at the end of April, and the Day of Remembrance and Mourning, held at the end of May. The celebrations of the Circassian days have become quite popular in Kabardino-Balkaria and other Circassian-populated areas in the North Caucasus, which apparently annoys Moscow. Even though the celebrations are quite depoliticized and peaceful, the public actions of Circassian activists concern Moscow. For the first time in the past three years, the authorities in Moscow refused to give a group of Circassians permission to hold a public event marking the Day of Remembrance and Mourning (Kavkazsky Uzel, May 17).

Patriarch Kirill’s visit appears to be the latest trick the Kremlin had up its sleeve. The timing of the visit—just a week before the Circassians’ Day of Remembrance and Mourning—is just one element. The Russian Orthodox Church’s focus on the Cathedral of Mary Magdalene is even more interesting. The Church considers Mary Magdalene the patroness of Maria Temryukovna, the second wife of Tsar Ivan the Terrible, in the 16th century. The Circassian Duchess Kuchenei became known as Maria Temryukovna after her royal marriage and conversion to Christianity. Events that took place nearly 500 years ago have acquired unusual political salience in modern-day Kabardino-Balkaria and the other Circassian-populated areas of the North Caucasus. Moscow is pushing for a new reading of the history of the conquest of Circassian lands, according to which the marriage between Ivan the Terrible and the Duchess Kuchenei was an act of “voluntary accession” of the Circassians to Russia. Hence, the government in Kabardino-Balkaria is gearing up for large celebrations with 2017 marking the 460th anniversary of Circassia’s “voluntary accession” to Russia (Onkavkaz.com, May 12).

The religious aspect of Kirill’s visit is also more subtle than it may seem at first glance. An estimated 20 percent of Kabardino-Balkaria’s population is Orthodox Christian, and there are 17 Orthodox Christian parishes in the republic (Kavkazsky Uzel, May 15). Unlike the majority of the other North Caucasian ethnic groups, ethnic Circassians, especially the Kabardins, are divided religiously. The majority of Kabardins are Muslim, but a substantial minority of Kabardins is traditionally Christian. Thus, Kirill’s visit may also have had the purpose of boosting the Christian Circassians, even though they are relatively small in number, and drive a wedge between the Muslim and Christian parts of the Circassian nation.

Moscow’s awkward attempts to rewrite history in a way favorable for Russians and at the same time avoid inclusive policies toward the Circassians are unsustainable. If Circassians “voluntarily joined” Russia in the 16th century, then obviously all Circassians who left their homeland since then are automatically considered to be Russian compatriots and should be treated as such. If the Russians conquered the Circassians and expelled them from their country in the 19th century, then the conquest should end now as colonial rule ended elsewhere after the Second World War. Moscow’s wriggling between these two versions of the history is becoming increasingly exposed as hypocritical and unjustifiable. 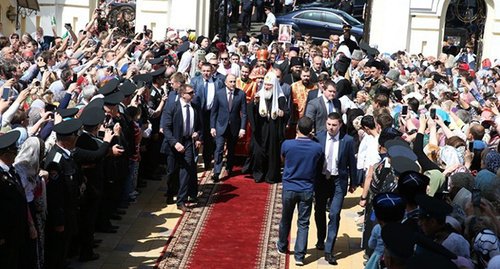 Back
New Divisions May Reduce Russian Army’..Next
After April Violence in Karabakh, Armeni..