On the night of April 2, the Armenian-Azerbaijani line of contact around the separatist region of Karabakh erupted in the worst violence for two decades until a tenuous ceasefire ended hostilities three days later. What is notable about the brief violent conflict is that both sides used Russian-made weaponry, as Moscow pursues a policy of “parity” in arming Armenia and Azerbaijan—which makes neither Yerevan nor Baku happy. The two South Caucasus rivals each seek new armament shipments, but both are facing growing inability to pay for them.

The ongoing conflict between the two republics began in 1988, three years before the collapse of the Soviet Union, when Armenia made territorial claims against Azerbaijan. As a result of the ensuing war, in 1992 Armenian armed forces occupied 20 percent of Azerbaijan, including the Karabakh region and seven surrounding districts, resulting in a so-called “frozen conflict” that endures to the present day. As the recent confrontation shows, the possibility of future violence remains present, and both sides are seeking tactical advantage on any future battlefield by securing advanced Russian weaponry. Up to the present time, Azerbaijan’s oil revenues have allowed it to outspend its rival, Armenia, by a significant amount to buy advanced Russian weaponry.

Last week (April 9), Russian Prime Minister Dmitry Medvedev visited both Yerevan and Baku in a shuttle diplomacy effort to reduce the tensions over Karabakh. While serving as president (2008–2012), Medvedev had repeatedly met with his counterparts from Armenia and Azerbaijan to discuss issues of the Karabakh conflict settlement. This time, however, Medvedev was evidently welcomed more warmly in Baku than in Yerevan (Vestniik Kavkaza, April 9).

The weaponry Azerbaijan has been purchasing from Russia played a key role in the recent military confrontation with Armenia. According to Yerevan, Azerbaijani forces deployed to the front line a number of Russian weapons systems, including TOS-1A 220-milimeter multiple rocket launcher and thermobaric flamethrower weapon systems mounted on a T-72 tank chassis as well as Smerch BM-30 heavy multiple rocket launchers (ArmeniaNow, April 8). According to the Stockholm International Peace Research Institute’s Arms Transfers Database, as of 2015, Armenia had not received either weapons system from Russia. This would give Azerbaijan significant battlefield tactical advantage as both systems can lay down concentrated heavy rocket fire (Sipri.org, accessed April 11).

Nor are the TOS-1A and Smerch BM-30 systems the only advanced Russian arms purchased by Azerbaijan. Between 2010 and 2014, Baku bought Russian weaponry estimated at $4 billion; beyond the two aforementioned systems, Azerbaijani purchases included two batteries of S-300PMU-2 anti-aircraft missiles, several Tor-2ME antiaircraft missile batteries, roughly a hundred combat and transport helicopters, at least 100 T-90S tanks, 100 BMP-3 armored personnel carriers and 18 MSTA-S self-propelled artillery (Kommersant, April 3). Should Azerbaijan deploy its full panoply of Russian armaments in any future conflict with Armenia, its antiaircraft batteries and helicopter capabilities would likely ensure air superiority while its T-90 brigades and artillery would probably dominate the tactical battlefield.

One problem common to Armenia and more recently Azerbaijan has been how to pay for their Russian armaments imports. In March, Russian Deputy Prime Minister Dmitri Rogozin, who oversees defense industry issues, made an unannounced trip to Baku. Both Russian and Azerbaijani press outlets cited unnamed sources who alleged that Rogozin’s visit was intended to sort out Azerbaijan’s failure to pay for some of its armament purchases. But dismissing these reports, Azerbaijani Foreign Minister Elmar Mammadyarov said the purpose of Rogozin’s visit was to iron out issues surrounding the technical specifications of the weapons deliveries, unrelated to the financial crisis the country is suffering as a result of falling oil prices (Haqqin.az, March 18).

The week after the Armenian-Russian agreement was signed, Azerbaijan’s Ministry of Foreign Affairs lodged a formal protest to Moscow regarding the loan, prompting Armenian Defense Ministry spokesman Artsrun Hovhannisyan to comment, “[Azerbaijan’s protest] is simply ridiculous, given Baku’s $4 billion arms deal with Russia, which is 20 times as much as the loan provided to Armenia for the same purposes.” Hovhannisyan claimed that while Azerbaijan has numerical advantage over Armenia when it comes to particular types of weapons, “this advantage has never been critical in terms of the aggregate coefficient,” further noting that earlier Moscow had provided the Armenian government with all the necessary guarantees that Russian arms supplies to Azerbaijan would not affect the regional balance of power (Verelq.am, March 3).

For 22 years, a definitive settlement of the Karabakh dispute has eluded negotiators, and the recent flare-up of hostilities proves that any temporary peace remains tenuous at best. Russia regularly asserts that its supply of yet more weaponry to the two South Caucasus rivals will produce parity in the conflict. But such cynicism aside, the underlying logic of allowing Armenia to buy MANPADS and antitank weapons will, in fact, likely negate Azerbaijan’s tactical military superiority on the battlefield, perhaps leading both of these post-Soviet republics to serious negotiations, as neither will have the military capacity to score a knockout blow. For now, in the absence of serious negotiations, it is hard not to see such armament sales as anything more than a Kremlin attempt to increase its political influence in the region. But in the interim, such sales threaten to bankrupt the defense ministries of both South Caucasus countries. 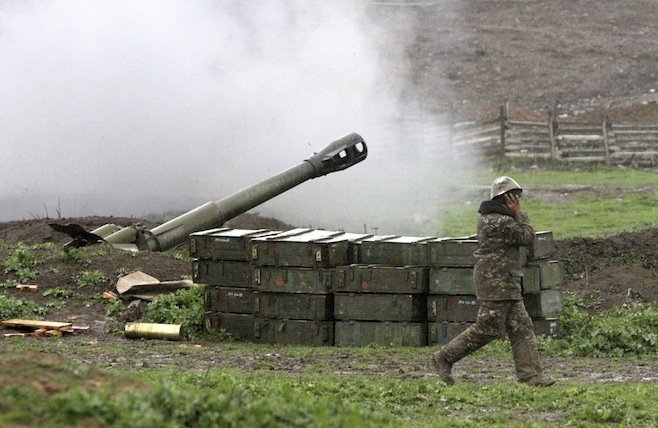