Saudi Arabia’s King Salman bin Abdulaziz al-Saud appears intent on shaking off the perceived lethargy of the Saudi royals in international efforts to combat terrorism, forming a 35-nation anti-terrorism coalition. The coalition has been promoted by Muhammad bin Salman, Salman’s son and the Saudi Defense Minister, as a “partner in the worldwide fight” against terrorism (Gulf News, December 15, 2015). In February, Saudi Arabia mounted a military exercise termed Operation Northern Thunder, involving 20 majority Sunni nations and constituting the greatest concentration of troops and military equipment in the Middle East since the Gulf War (Middle East Monitor, March 3).

But the Kingdom’s ambitions for its anti-terror coalition—which extend far beyond the military drills of Northern Thunder—are unlikely ever to be realized. Since Shia-majority Iran and Iraq were deliberately excluded (as was Lebanon’s Shia Hezbollah movement), there are already questions about the coalition’s true intent.

The Kingdom earlier established an alliance of Muslim countries to combat Yemen’s Houthi movement after the Shia Zaidi rebels occupied Sanaa in 2014 and displaced the government from Yemen’s capital. Assessing the performance of this coalition provides a useful guide to the potential for an even larger Saudi-led counterterrorism coalition designed to intervene in Syria and elsewhere, and its relative lack of success should constitute a warning.

Operation Decisive Storm was launched on March 26, 2015, as a means of reversing recent territorial gains by the Houthis, securing Saudi Arabia’s border with Yemen, and restoring the government of internationally recognized president Abd Rabu Mansur al-Hadi, primarily by means of aerial bombardment. Although it had support from the UK and the U.S., the Saudi-led intervention was seen by Iran, Russia, and leaders within the Gulf’s Shia population as a violation of international law.

Despite having the largest army in the coalition, Egypt’s contribution on the ground appears to have been minimal, with Cairo perhaps still wary of entanglement in Yemen after the drubbing its expeditionary force took from Royalist guerrillas in Yemen’s mountains during the country’s 1962-1970 civil war. The Egyptians instead focused on contributing naval ships to secure the Bab al-Mandab southern entrance to the Red Sea, a strategic priority for both Egypt and the U.S.

On April 21, 2015, Operation Decisive Storm was declared complete, to be replaced the next day with Operation Restoring Hope. Though the new operation was intended to have a greater political focus and a larger ground component, the bombing campaign and U.S.-supported blockade of rebel-held ports continued.

A reliance on aerial bombardment failed to make significant changes in military facts on the ground, while a general lack of concern for collateral damage, poor ground-air coordination (despite Western targeting assistance), and a tendency to strike any movement of armed groups alienated the civilian population and kept Yemeni government troops in their barracks (Jadaliyya, May 2, 2015). At times, the airstrikes dealt massive casualties to non-military targets, including a raid on a wedding party in September 2015 that killed 131 people and an attack on a market in Hajja province in March 2016 that killed 119 (Al-Jazeera, October 8, 2015; Middle East Eye, March 17).

Coalition operations have killed some 3,000 militants, but the death of an equal number of civilians alongside the use of cluster munitions and the destruction of infrastructure, mosques, markets, heritage buildings, residential neighborhoods, health facilities, schools and other non-military targets have been serious missteps. Meanwhile, interruptions to the delivery of food, fuel, water, and medical services have left many Yemenis prepared to support whoever is able to provide essential services and a modicum of security.

A number of Muslim-majority nations appear to be contributing troops to the Saudi-led coalition in return for substantial financial favors. Khartoum’s severance of long-established military and economic relations with Iran has been followed by a much cozier and financially beneficial relationship with Saudi Arabia. Sudan committed 850 troops (out of a pledged 6,000) and four warplanes to the fight in Yemen. In return, Khartoum is reported to have received a $1 billion deposit from Qatar in April 2015, and another from Saudi Arabia that August, followed by pledges of Saudi financing for a number of massive infrastructure projects (Gulf News, August 13, 2015; East African [Nairobi], October 31, 2015; Radio Dabanga, October 4, 2015). Sudanese commitment to the Yemen campaign was also rewarded with $5 billion worth of military assistance from Riyadh in February, much of which will be turned against Sudan’s rebel movements and help ensure the survival of President Omar al-Bashir (Sudan Tribune, February 24, 2016).

Like the leaders of other coalition states, President Bashir justified the deployment in locally unchallengeable terms of religious necessity—the need to protect the holy places of Mecca and Madinah (Sudan Tribune, March 15, 2016). Neither, of course, is under any realistic threat from Houthi forces.

There is little to be surprised about in the coalition’s use of mercenary soldiers. A large portion of Saudi Arabia’s combat strength and officer corps consists of Pakistanis, while Pakistani pilots play important roles in the air forces of both Saudi Arabia and the UAE. Oman and Qatar also rely on mercenaries in their defense forces, and Eritrean troops are thought to be embedded with the UAE’s forces in Yemen. Although denied by Eritrea’s foreign ministry (Geeska Afrika Online [Asmara], February 23), the UN’s Somalia-Eritrea Monitoring Group (SEMG) has cited “credible information” that this is the case. SEMG also reported that Eritrea was allowing the Arab coalition to use its airspace and territory in return for fuel and financial compensation. [1] Somalia accepted a similar deal in April 2015 (Al-Monitor, September 10, 2015).

In response to the coalition, the Houthis have mounted near-daily attacks on Saudi Arabia’s border defenses, using mortars, Katyusha, and SCUD rockets to strike Saudi positions in Najran and Jizan (Al-Jazeera, December 27, 2015). When Republican Guard forces loyal to ex-president Ali Abdullah Saleh joined the Houthi rebellion, they brought substantial firepower in the form of the Russian-made OTR-21 mobile missile system (Albawaba, January 18). These have been used in at least five major strikes on Saudi or coalition bases, causing hundreds of deaths and many more wounded.

Houthis forces have made little attempt to hold ground on the Saudi side of the border. Such a move would only feed Saudi propaganda that the Shia are intent on seizing the holy cities of the Hijaz.

Eliminating al-Qaeda’s presence in Yemen was not a military priority of the Saudi-led campaign at the outset, and recent efforts have had little success in this regard, with an assault by Saudi Apache attack helicopters on AQAP positions near Aden on March 13, and airstrikes against AQAP-held military bases near Mukalla, failing to dislodge the group (Xinhua, April 3, 2016).

Instead, al-Qaeda has thrived amid the coalition’s bombardment of Yemen. With control of nearly four governorates, a major port (Mukalla, capital of Hadramawt province) and 373 miles of coastline, al-Qaeda has created a financial basis for its administration by looting banks, collecting taxes on trade and selling oil to other parts of fuel-starved Yemen, an unforeseen result of the naval blockade. The group even tried (unsuccessfully) to negotiate an oil export deal with Hadi’s government last October (New Straits Times, April 8, 2016). Perhaps drawing on lessons learned from al-Qaeda’s attempt to hold territory in Mali in 2012-2013, AQAP has focused less on draconian punishments for locals and the destruction of Islamic heritage sites than on the creation of a working administration that provides infrastructure, humanitarian assistance, health services and a degree of security not found elsewhere in Yemen (IBT, April 7, 2016).

Meanwhile, the Islamic State (IS) has been active in Yemen since its local formation in November 2014. Initially active in Sanaa, it has switched its focus to Aden and Hadramawt, using asymmetric tactics such as assassinating security figures and deploying suicide attackers in bomb-laden vehicles against soft targets such as mosques, as well as launching suicide attacks on military checkpoints followed by assaults with small arms.

With its small numbers, IS has been most effective in urban areas that offer concealment and dispersal opportunities. While the group appears unable to expand its influence in Yemen, this has little to do with the Saudi-led coalition’s efforts and more about the contempt with which it treats the lives of its own fighters and the widespread dislike of the movement’s foreign (largely Saudi) leadership.

The cost of Saudi Arabia’s intervention in Yemen has been considerable, both in terms of cash and international reputation. It is also difficult to see the operation as a military success—Hadi is no closer to ruling than when the campaign began, Sanaa remains under Houthi control, and radical Islamists have taken advantage of the intervention to expand their influence. The Saudi-led intervention has also left one of the poorest nations on earth in crisis, with 2.5 million displaced and millions more without access to basic necessities.

The Saudis are now intent on drawing down ground operations (al-Arabiya, March 17, 2016). A ceasefire came into effect on April 10, in advance of UN-brokered peace talks in Kuwait to begin on April 18. President Hadi’s appointment of a new vice president and prime minister, the presence of a Houthi negotiating team in Riyadh, and the exclusion of ex-president Saleh are all signs that a negotiated settlement could be imminent (Ahram Online, April 7, 2016).

If peace negotiations succeed in drawing the Houthis into the Saudi camp, the Kingdom will emerge with a significant political, if not military, victory. The Kingdom will, however, still have to contend with an even stronger AQAP. The group is consolidating a popular administration in the Yemeni regions under its control and it is not impossible to imagine it becoming the first al-Qaeda affiliate to shift from terrorist organization to political party.

In light of the current intervention in Yemen, it is difficult to imagine how the insertion of another Saudi-led coalition into Syria would make any meaningful contribution to ending the conflict there. A possible admission of this came from Saudi foreign minister Adl al-Jubayr, who indicated the Kingdom intends to contribute only a smaller Special Forces unit to the fighting in Syria, and will focus on destroying IS forces “in the framework of the international coalition,” rather than wholesale regime change (Gulf News, February 23, 2016).

Andrew McGregor is Director of Aberfoyle International Security, a Toronto-based agency specializing in security issues related to the Islamic world. 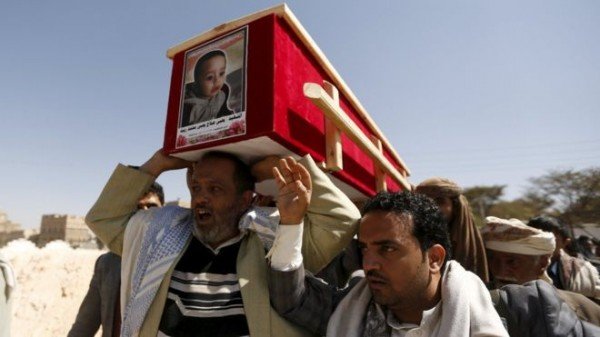 The Jamestown Foundation was proud to host a webinar on... END_OF_DOCUMENT_TOKEN_TO_BE_REPLACED

Jamestown Foundation Analyst Richard Arnold was interviewed by PolitiFact for a story on the Lie of the Year 2022, or Putin’s long list of lies... END_OF_DOCUMENT_TOKEN_TO_BE_REPLACED

The January 2016 issue of Militant Leadership Monitor begins with briefs about Turkmen Iraqi leader, Arshad al-Salehi, and a Libyan military commander by the name of Salam Jadallah al-Ubaidi. The first profile in the issue describes the significance of Abu Wardah Santoso in the uptick of Islamic State violence... END_OF_DOCUMENT_TOKEN_TO_BE_REPLACED