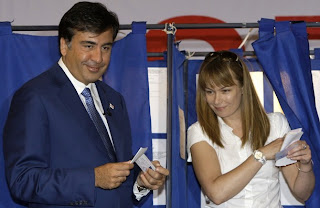 On May 30, the Georgians went to the polls to elect their local municipalities, called sakrebolos, and for the first time, Tbilisi residents chose their mayor in a direct vote. Although a direct election of the capital city’s mayor deserves much attention, Georgians were occupied by more pressing questions while casting their ballots at the polling stations countrywide.

This past weekend represented the first round of elections since the Russian invasion in August 2008 and thus, they were a test both for Georgia’s democratic maturity and for the level of support President Mikheil Saakashvili’s modernization and westernization agenda enjoys among the Georgian public. It appears that this Caucasus nation of five million has made a vigorous step forward in both directions.

The results of the exit poll conducted by Edison Research and unveiled on national television shortly after the polling stations were closed at 8:00 P.M. on Sunday evening gave a decisive victory to Saakashvili’s ruling party, United National Movement (UNM), and its mayoral candidate Gigi Ugulava. With 59%, UNM is the clear leader followed by the Alliance for Georgia, a moderate non-parliamentary opposition amalgamation, with 17%, and the Christian Democratic Movement, a parliamentary opposition party, with 10%. Regarding the mayoral candidates, according to the same exit poll results, Ugulava won by 60% of the vote, while the Alliance for Georgia’s Irakli Alasania and the Christian Democrats’ Giorgi Chanturia gathered 17% and 10%, respectively.

A so-called parallel counting of the ballots conducted by New Generation-New Initiative (NGNI), a Tbilisi-based nongovernmental organization, showed slightly different—but essentially the same—results. In NGNI’s preliminary report, Ugulava has 56.2%, Alasania 16.28% and Chanturia 12.95%. As far as the political parties are concerned, NGNI gave 53.05% to UNM, 15.06% to the Alliance for Georgia and 14.95% to the Christian Democrats.

The Central Election Commission (CEC), Georgia’s electoral authority in charge of the election process, has yet to conclude the counting. According to the CEC, the voter turnout in the election amounted to 49%, which is an average level of participation in local elections in general. With 100% of the ballots counted in Tbilisi, Ugulava was able to capture 55.2%, followed by Alasania with 19.06% and Chanturia with 10.71%. By Georgian law, in order to become the mayor, 30% plus one vote is needed to avoid a runoff – a threshold that Ugulava has greatly exceeded on all accounts.

As far as the openly pro-Russian National Council—led by the former Prime Minister Zurab Noghaideli, and its mayoral candidate, Zviad Dzidziguri—are concerned, it was a poor showing, as was widely anticipated by several public opinion polls conducted between March and May. According to the exit poll, the parallel counting and the interim results published by the Central Election Commission, the National Council and Dzidziguri have been supported by between 6 and 8% of the voters.

The international organizations that sent their observers to Tbilisi have hailed the Georgian ballot as fair and democratic. The head of the European Union Delegation to Georgia, Ambassador Per Eklund, told Georgia’s Imedi TV that the elections were “organized at the highly professional level,” and compared to the previous elections, “progress was evident.” He then added that the observers from his organization “found no violations.” Peter Semneby, the E.U’s special representative for the South Caucasus, for his part, said that “the elections were fair and transparent, meeting international standards.”

Claiming victory late on May 30, Ugulava expressed readiness to engage in “fruitful cooperation” with all opposition parties represented in the Tbilisi City Council. At least one mayoral candidate, Giorgi Chanturia from the Christian Democrats, has congratulated Ugulava on his victory.

The results of the Georgian vote show that President Saakashvili and his party enjoy broad public support despite, or rather due to, the radical reforms carried out in all spheres of Georgian life, be it privatization, liberalization of the economy or westernization of Georgia’s education system, public services, law enforcement and military. Saakashvili and his party’s strong support for Georgia’s sovereignty, freedom of choice and territorial integrity is a no less important reason.

As the election results show, the moderate opposition parties have performed much better than the anti-Western forces with close Moscow ties, such as the National Council, that either threatened a bloody “Bishkek scenario” or called for the adoption of the same pro-Kremlin policy as Ukraine did under its new president, Viktor Yanukovych.

Georgia will hold its parliamentary elections in 2012, and then presidential elections in 2013. The next two to three years will be decisive for the country’s leadership and general public in making their democratic gains irreversible and completing the westernization process. The Russian occupational forces in Georgia’s Abkhazia and Tskhinvali regions constitute an immense challenge for Georgia’s future as does the fierce Russian opposition to both Georgia’s internal transformation and Euro-Atlantic integration.

Back
What Does It Take To Be A Female Leader ..Next
Lithuania’s Support Can Galvanize Geor..

The Jamestown Foundation is pleased to host a forthcoming webinar... END_OF_DOCUMENT_TOKEN_TO_BE_REPLACED

Jamestown Foundation Analyst Kseniya Kirillova offered her expert analysis on Putin’s “partial mobilization” announcement to G-Zero. “The Kremlin calls it ‘partial’ so as not to... END_OF_DOCUMENT_TOKEN_TO_BE_REPLACED

The May 2015 issue of Militant Leadership Monitor begins with a brief on trans-Saharan jihadist Adnan Abu Walid al-Sahrawi, who recently switched allegiance from al-Qaeda to the Islamic State, by Nicholas Heras. He follows with another on Abu Humam, who leads one of the local jihadist groups to defend the al-Yarmouk Palestinian... END_OF_DOCUMENT_TOKEN_TO_BE_REPLACED