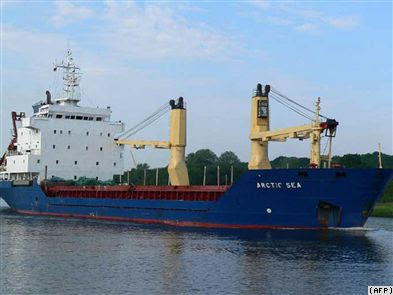 The mysterious adventures of the freighter “Arctic Sea” has taken on new dimensions. The Russian Security Service, the FSB, reported on September 8 that there was no illegal cargo on board the ship; only the original load of timber.

However, according to the British paper the Telegraph, the Arctic Sea cargo ship that disappeared for almost a month earlier this summer, was carrying weapons to Iran and was being tracked by the Mossad, the Israeli security service.

Russian Foreign Minister Sergei Lavrov on September 8, once again denied speculation that the hijacked Finnish freighter Arctic Sea had been smuggling weapons to Iran. Quoted by the Interfax news agency, Lavrov said that speculation that an S-300 air defense system was hidden aboard the freighter’s cargo of wood was “groundless and absolutely untrue.”

“Russia will closely investigate the ship, with the support of Malta under the flag of which the freighter sailed. Everything will be very transparent,” Lavrov said.

There was also speculation that Soviet-era X-55 cruise missiles which are capable of carrying nuclear warheads were among the cargo.

Mikhail Voitenko, editor of the online “Sovfracht Marine Bulletin” was among the earliest “and most outspoken of those casting doubt on the official version, questioning why pirates would risk seizing a relatively inexpensive cargo in one of Europe’s busiest shipping lanes.”

RFE/RL reported that on September 2, “Voitenko left Russia on the first flight to Istanbul after receiving a nighttime telephone call advising him to leave. He’s declined to identify the callers, but told news agencies they were “serious people,” and hinted they were from the special services. He said the callers told him people involved in the case were furious at him for speaking publicly.

Back
Why Are the Russians Digging Tunnels in ..Next
Protecting the “citizens” of Russia

The Jamestown Foundation is pleased to host a forthcoming webinar... END_OF_DOCUMENT_TOKEN_TO_BE_REPLACED

Jamestown Foundation Analyst Kseniya Kirillova offered her expert analysis on Putin’s “partial mobilization” announcement to G-Zero. “The Kremlin calls it ‘partial’ so as not to... END_OF_DOCUMENT_TOKEN_TO_BE_REPLACED

The March 2020 issue of Miliant Leadership monitor features a brief on the recently killed al-Shabaab commander Bashir Qorgab; a report on the recent escape of Tehreek-e-Taliban spokesperson Ehsan ullah Ehsan from prison in Pakistan; an analysis of Mohamed Shaeban ‘al-Mirdas,’ who recently defected from the Libyan GNA government; a profile... END_OF_DOCUMENT_TOKEN_TO_BE_REPLACED