Kurdish fighters in Syria have taken greater control of areas inhabited by both Arabs and Kurds since July 16, and aim to capture three other mixed areas in the governorates of Raqqah, Aleppo and Hasakah in order to connect existing Kurdish areas (al-Monitor, October 25). This might cause opposition by Arab tribes that the Syrian regime placed in the Kurdish-dominated areas in the governorate of Hasakah in the 1970’s as part of an Arabization plan to change the region’s demographic balance at the expense of the Kurds (al-Monitor, October 8). However, the Kurdish parties have made efforts to win the support of local Arab populations by distinguishing between jihadist and Arab civilians, and by attempting to involve the latter in Kurdish interim governance.

Although the Kurds have taken part in a mixed Arab-Kurdish brigade within the Free Syrian Army (FSA) called Jabhat al-Akrad (Kurdish Front) since mid-2012, the Kurdish militia, the Yekîneyên Parastina Gel (YPG – People’s Defense Units) is now cooperating with Arab tribes to control these mixed areas. The strongest Syrian Kurdish party, the Partiya Yekîtiya Demokrat (PYD – Democratic Union Party), is carrying out a “soft-policy” in dealings with the local Arab population. This is based on the ideology of the rebel Partiya Karkerên Kurdistan (PKK – Kurdistan Workers Party), created in Turkey in 1978.

The PYD, affiliated with the PKK, announced in July that it would form a transitional government based on the democratic self-management project outlined at the third party conference of the PYD in 2007. The project is based on the ideology of Abdullah Öcalan’s “confederalism” or “democratic autonomy,” which aims to form self-ruled Kurdish areas in Syria, Iran, Iraq and Turkey, without threatening the territorial integrity of these states (al-Monitor, November 13).

Unlike the more homogenous Kurdish areas of Iraq and Turkey, the Kurdish areas in Syria do not constitute a contiguous Kurdish region, making the development of Kurdish autonomy in Syria more difficult. The Kurds in Syria are spread between three unconnected Kurdish enclaves (Afrin, Ayn al-Arab and al-Jazeera), located in the governorates of Aleppo and Hasakah, which are surrounded by Arab and Turkmen-inhabited areas. There are also Christians living in these areas.

The PYD has recognized this geographical reality; therefore, on November 11 they announced the division of the Kurdish areas into three cantons, with each canton having its own council to administer local affairs. PYD-leader Salih Muslim hopes that “the three of them will be united at a later stage when circumstances allow them to do so” (KurdishInfo.com, December 7).

The YPG militia was formed to control the Kurdish-dominated areas of Syria. The YPG confirmed in November that they want to connect these Kurdish areas by capturing the areas of Tel Ebyad, Azaz and Jarabulus, inhabited by Turkmen and Arabs and mostly controlled by Islamist groups close to al-Qaeda.

Most likely, the Islamic State of Iraq and al-Sham (ISIS) took precautionary measures against this by arresting Kurdish civilians suspected of sympathy towards the PYD. Reportedly, hundreds of members of the ISIS arrived in the Kurdish neighborhoods of Manbej in the Jarabulus region on December 2, followed by the kidnapping of 51 Kurdish civilians in three days and the imposition of a blockade on Afrin and Kobani (Hawar News Agency, December 6; Syrian Observatory for Human Rights, December 5; Welati, December 7).

A pro-ISIS Twitter account claimed that the ISIS raided YPG sleeper cells and arrested more than “50 apostates” (@zhoof21, December 6). Moreover, Islamist groups have been bringing Arabs from other areas to Tel Ebyad and putting them in Kurdish houses to increase their support (Firat News Agency, August 25).

The ISIS and other Islamist armed opposition groups had earlier forced the Kurdish FSA group Jabhat al-Akrad (close to the PYD and PKK) out of the mixed areas in the north of Syria – al-Bab, Azzaz, Raqqah, Tel Ebyad, the countryside of Aleppo and other areas – after the YPG expelled the ISIS and other Islamist groups from the mixed city of Ras al-Ayn on July 17. Jabhat al-Akrad was also expelled from the FSA’s Military Council in August (Transnational Middle-East Observer, August 15).

Jabhat al-Akrad was most likely created by the PYD to gain access to mixed Arab-Kurdish areas and to make logistics between the three Kurdish enclaves easier. “Kurds in Syria live in various Arab cities, towns and villages. We wanted Kurds to have a common organization in these regions with other ethnicities. Therefore, we established Jabhat al Akrad,” said Haji Ahmad Kurdi, head of Jabhat al-Akrad (Rudaw, August 11).

A New Strategy Toward the Arab Population

However, since the YPG took over Ras al-Ayn and Jabhat al-Akrad was expelled from most mixed areas, the PYD and YPG have changed their strategy. On October 24, the YPG captured the Iraqi Yaroubiya border crossing with the support of local Arab tribes (al-Monitor, November 25). Some Arab villages supported the YPG in expelling FSA and Islamist fighters in villages surrounding Ras al-Ayn as a result of looting by armed opposition groups (al-Monitor, October 8).

However, Arab fighters could still switch their support to Islamist armed groups if the Kurdish groups grow too powerful and threaten to dominate Arab-inhabited areas in the north. Four leading members of the Arab Ba’ath party joined jihadist groups in Arab villages in al?Qahtaniyah (Tirbesipi) fighting the YPG even though the Ba’ath-regime opposes Jihadi groups (Hawar News Agency, October 13). The city experienced tensions between Arab settlers and Kurds after 2011 and is part of the Arab belt.

The PYD therefore maintains a careful policy towards the mixed areas and tries to incorporate Arabs and Christians in their interim administration. This is also part of the imprisoned PKK leader’s ideology of democratic confederalism, which opposes a centralist nation-state and aims to preserve internal autonomy.

Öcalan’s system of confederalism aims for “political self-administration where all groups of society and all cultural identities can express themselves in local meetings, general conventions and councils,” Öcalan wrote in his ideology of democratic confederalism, released on March 20, 2005. [1]

Sinem Muhammad, co-head of the PYD People’s Council for West Kurdistan, said that the PYD rejects borders and called for the recognition of ethnic differences between Arabs and Kurds. She said that in mixed areas, Arabs have the right to have their own council and participate in the administration with their own councils. [2]

The ideology of the PYD and PKK seems to have had some success in the Arab village of Alook, close to Ras al-Ayn, where local Arabs thanked the YPG (al-Monitor, October 13). A local council of Arabs was formed in the village with the help of the PYD, and the YPG stayed out of the village to demonstrate that they do not want to change the local demography.

The YPG also got some support from members of the Shammar tribe when they took over the Yaroubiya border crossing on October 24. The Shammar tribe’s FSA brigade, the Liwa Ahrar al-Jazira (LAJ), was expelled from Yaroubiya in mid-October following allegations of corruption by the al-Qaeda affiliate Islamic State of Iraq and Syria (ISIS). [3] The YPG used the local resentment against al-Qaeda to dominate the town.

There are signs that the YPG is now trying to incorporate Arabs in their armed formations. On November 1, the YPG created an Arab brigade in Ras al-Ayn called Ahrar al-Watan (Free Men of the Homeland), led by Hawas al-Akub (Hawar News Agency, November 1). Also in Yaroubiya, local Arabs joined YPG security formations and local Arabs and Kurds will reportedly jointly administer the border-crossing (al-Monitor, November 25).

PYD leader Salih Muslim outlined a clearer Arab policy in a recent interview, saying that the PYD’s militias would fight against jihadi groups, but would not force out local Arabs, whether settlers or native Arabs:

There are three sorts of Arabs among us: there are those with whom we have always lived and who we have fought alongside. We defend the brotherhood between these peoples. There are those who do not belong, Arabs who came from outside, other countries or the region, the jihadists who have burned our homes, and decapitated Kurds. Finally, there are the Arabs who were moved to Kurdistan by force by [former Syrian President] Hafez al-Assad … to Arabize the region. They are victims … and we advocate a peaceful solution for these populations. Those who can return to their hometowns should do so and the others can live in peace with the Kurds (AFP December 2).

It seems that the most powerful Kurdish party, the PKK-affiliated PYD, has decided to expand their control over mixed areas in Northern Syria instead of cooperating with the FSA. Their aim is to create a transitional administration. In mixed areas under their control, the PYD also wants to create councils of the local population based on the ideology of imprisoned PKK leader Öcalan and has a ‘soft policy’ that gives local Arabs their own local power. The PYD aims to include local Arabs and Christians in their administration project and their militias, or to cooperate with independent Arab or Christian militias. In the end, the success of their project will depend on whether the civil war continues, or one of the opposing factions wins. If either faction wins, they would be unlikely to accept any form of Kurdish autonomy. The PYD hopes to get international support in the upcoming Geneva II conference scheduled for January in order to legitimize their project. The PYD emphasizes that their project is temporary, although in reality they want to create a form of Kurdish self-rule in Syria.

Wladimir van Wilgenburg is a political analyst specializing in issues concerning Iraq, Iran, Syria and Turkey with a particular focus on Kurdish politics. 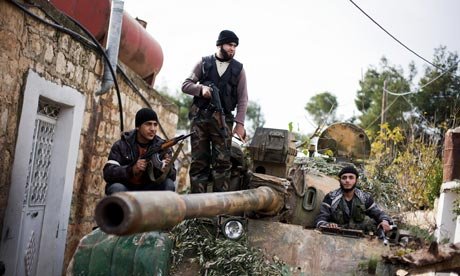 Back
Al-Qaeda in the Islamic Maghreb Attacks ..Next
Ansar al-Shari’a: Transforming Libya i..

The Jamestown Foundation was proud to host a webinar on... END_OF_DOCUMENT_TOKEN_TO_BE_REPLACED

Jamestown Foundation Analyst Richard Arnold was interviewed by PolitiFact for a story on the Lie of the Year 2022, or Putin’s long list of lies... END_OF_DOCUMENT_TOKEN_TO_BE_REPLACED

The June 2022 issue of Militant Leadership Monitor is a special issue of MLM that examines militants fighting in the Russo-Ukraine War. It starts off with a piece on Vladimir Andonov Batobolotovich, also known as “Vakha,” a notorious Wagner Group mercenary recently killed in Ukraine. It also features profiles... END_OF_DOCUMENT_TOKEN_TO_BE_REPLACED