On April 26, the Supreme Court of the Republic of Crimea officially banned the Mejlis, the quasi-governing assembly of the of the Crimean Tatar people (Qha.com.ua, April 26). After this verdict, all Mejlis activities were suspended across the entire territory of the Russian Federation, including in occupied Crimea, which Russia illegally annexed in March 2014 (Qha.com.ua, April 26). The court case was set in motion in February 2016, when the occupying authorities’ so-called Crimean Prosecutor Natalya Poklonskaya petitioned the Ministry of Justice of the Russian Federation and argued that a prohibition against the Mejlis was necessitated by Federal Criminal Code 9 and 10, “On Combatting Extremist Activity.” On April 18, the Ministry of Justice included the Mejlis on its federal registry of radical and extremist civic and religious organizations, whose activities must be suspended by law (Qha.com.ua, April 19). Based on this ruling, the Mejlis could no longer organize public events, meetings or gatherings, participate in elections and referendums, publish in the mass media, utilize transportation provided by the government or municipality, or use bank accounts for anything other than daily activities (Qha.com.ua, April 26).

During the court process, Poklonskaya presented a 600-page report and five or six DVDs purported to show the “extremist” activities of the Mejlis. Many of these articles were fictitious and unrelated to the Russian Federation’s jurisdiction. One piece of evidence presented a nonviolent protest that took place in 1988, when there was no Mejlis and the majority of Crimean Tatars were still living in exile after by Soviet authorities deported them from the peninsula on May 18, 1944 (Qha.com.ua, April 25).

Immediately after the Crimean Supreme Court’s ruling, long-time leader of the Crimean Tatars and former Mejlis chairman Mustafa Cemilev put out a press release. In it, Cemilev affirmed that the prohibition represents a wider and intensifying campaign of intimidation tactics directed against the organization by the region’s occupying authorities. The Mejlis headquarters in Simferopol has 33 members, and there are an additional 230 local Mejlises spread across Crimean towns and villages. Each of these local Mejlises has 3–15 members, which brings the organization’s total membership to around 2,500 people. By outlawing the Mejlis, Cemilev reiterated, approximately 2,500 individuals, as well as who are associated with them, will face persecution and jail sentences for their so-called “allegiance” to an “extremist organization” (Qha.com.ua, April 27).

In reality, the outlawing of the Mejlis is illegal because it is based on an absurd claim. The Mejlis is neither a civic nor a religious organization and was never registered in Crimea as such (Turkasi.net, September 5, 2015). The Mejlis is a national assembly, the elected representative and the highest executive body of the Crimean Tatars, who do not have their own state. The Mejlis was instituted to defend the rights of Crimean Tatar people deported from their historical homeland by Joseph Stalin in 1944. The organization has focused on the improvement of the lives of the returnees to their peninsular homeland, including the preservation of Crimean Tatar education, ensuring justified land access, as well as the restoration of the Crimean Tatar language and culture through nonviolent means (Lr4.lsm.lv, April 26).

The Mejlis was established in Crimea in 1991, and was later legalized in Ukraine, in 1999, by a presidential decree signed by Leonid Kuchma, who formed the umbrella “Council of Representatives of the Crimean Tatar people under the President of Ukraine,” which included the Mejlis (Liga.net, October 1, 2014). The Mejlis had good relations with Ukraine’s next head of state, Viktor Yuschenko, whom the organization enthusiastically supported during the 2004 presidential elections. Even during the subsequent Viktor Yanukovych era, the Mejlis continued to work peacefully, although it faced some minor challenges from the government.

One of the real reasons behind the present ban was the Crimean Tatars’ broad loyalty to Ukraine and their overwhelming determination to refuse to abide by the rules of the occupying Russian authorities (Qha.com.ua, April 26). The Mejlis headquarters was the only building that, after the annexation, flew the Ukrainian flag—despite consequent physical violence at the hands of the riot police (see EDM, April 28, 2014). Before the annexation, Crimean Tatars organized pro-Maidan meetings in Simferopol and supported Ukraine’s territorial integrity alongside their compatriots in Kyiv’s Maidan. Moreover, they, as a group, openly boycotted the March 16 Russian-imposed referendum on the status of Crimea. After the annexation, the Mejlis pointedly refused to recognize Crimea’s annexation (Patrioty.org.ua, March 3).

The occupying Crimean government has used propaganda and disinformation tactics in its efforts to oppose and shut down the Mejlis. First, the self-proclaimed prime minister of Crimea, Sergei Aksyonov, labeled Cemilev a destabilizing agent, a provocateur supported by Western intelligence agencies (Krymr.com, April 21, 2014). Then, the Russian authorities targeted outspoken Crimean Tatars with house searches and routinely confiscated their personal computers, laptops, cell phones and books (Qha.com.ua, March 4). Russian officials have also tried to coerce Crimean Tatar youth to work for the Federal Security Services (FSB) and to inform on their own people (Qha.com.ua, March 26). As Russia’s multi-faceted disinformation and “forced assimilation” tactics fell through, however, the Crimean authorities pursued an old Soviet tactic of creating a puppet ethnic institution filled with Crimean Tatar collaborators—the Kyyrym birlingi (see EDM, October 28, 2014). Thus, the Mejlis had to go.

International organizations and human rights watchdogs, such as the Organization for Security and Cooperation in Europe (OSCE), the United Nations, and Amnesty International, as well as a number of Western governments including the United States, have openly criticized the Russian authorities for outlawing the Mejlis. But Crimean Prosecutor Poklonskaya promptly shrugged off this strong reaction from Western powers, claiming that it, in fact, clearly proved her allegations that Cemilev was actually a foreign agent (Qha.com.ua, April 22).

In a post-verdict press conference, on April 26, the Mejlis’ current chairperson, Refat Chubarov, announced that from this day forward, the organization would work in an emergency mode from Kyiv, where the body is now temporarily located (Qha.com.ua, April 26). During this emergency mode, a special council will be in charge, to be headed by Cemilev, Chubarov, and eight other Mejlis members, all whom were barred from Crimea by the occupying authorities and permanently settled in mainland Ukraine (Qha.com.ua, April 26). Chubarov stated that they were also opening two Mejlis offices abroad, in Washington and in Brussels, in the fall (Qha.com.ua, April 22). Although the Mejlis will again be able operate freely, it remains to be seen how much this forced exile may hamper their ability to help Crimean Tatars left behind. 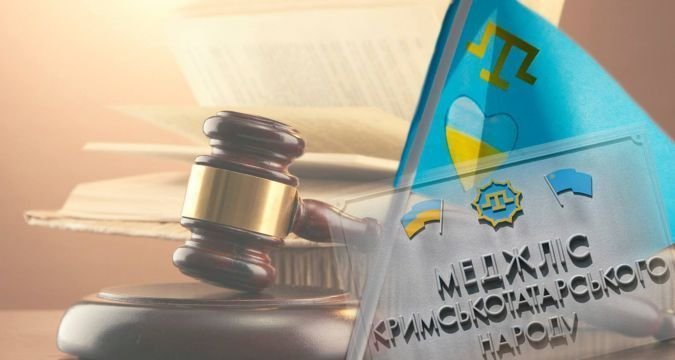 Back
Moscow’s Appointment in Doha Goes AwryNext
An Unfrozen Karabakh Threatens to Ignite..

The Jamestown Foundation was proud to host a webinar on... END_OF_DOCUMENT_TOKEN_TO_BE_REPLACED

Jamestown Foundation Analyst Richard Arnold was interviewed by PolitiFact for a story on the Lie of the Year 2022, or Putin’s long list of lies... END_OF_DOCUMENT_TOKEN_TO_BE_REPLACED

Since at least 2014, the United States’ National Security Strategy and almost every major US think tank has called attention to the parlous state of the North Atlantic Treaty Organization’s (NATO) eastern flank. There, some of NATO’s newest and smallest member states are threatened by an aggressive and revanchist... END_OF_DOCUMENT_TOKEN_TO_BE_REPLACED