It was a summit of modest expectations and modest results for the North Atlantic Treaty Organization (NATO) in Warsaw on July 8–9. These results are of an interim nature: building-blocks for further decisions at upcoming ministerial meetings, not waiting until next summit. The Warsaw results do not, as yet, correlate with the growth in Russia’s capacity to threaten, intimidate, or subvert the Alliance generally and its eastern—now “frontline”—member countries in particular.

While Georgia actively participates in NATO operations in other theaters, NATO all along tolerated Russia’s unlawful “peacekeeping” monopoly in Georgia’s own territories. NATO did not raise that issue in NATO-Russia relations; the North Atlantic Alliance recused itself from any peacekeeping role in its own neighborhood; and did not attempt to secure Georgia against the threat of Russian “peacekeeping” troops becoming an invasion force.

Politically, approval of a Membership Action Plan (MAP) demonstrates NATO’s willingness to accept the aspirant country into the Alliance, once the MAP process is completed. In Georgia’s case, however, there is no internal consensus in NATO on whether the Open Door policy applies to Georgia in practice rather than rhetorically. On this issue, NATO’s internal debate has shifted in recent years.

Back in 2008, Germany had vetoed a Georgian MAP, and Russia cashed what amounted to an indirect Russian veto on NATO’s Open Door policy. Since then, the balance of power, balance of interest, and balance of will in NATO’s eastern neighborhood has shifted in Russia’s favor to the extent of blocking Georgia’s access to NATO membership—or a membership track, called MAP or otherwise—for the foreseeable future.

Eight years ago, the United States strongly supported a MAP for Georgia; the Alliance seemed about to follow the US lead, until Germany blocked NATO’s decision (the French position was wait-and-see, at that time). After 2008, from summit to summit, a growing number of Western European countries have preferred to keep Georgia on the outer side of the theoretically open door, mostly for fear of antagonizing Russia. The United States stopped pressing for Georgian membership or a Georgian MAP (nor has it offered a bilateral US-Georgia defense and security relationship) during the Barack Obama administration’s two terms in office.

Georgia’s remaining supporters realize like everyone else in NATO that a major decision to integrate Georgia could provoke a Russian military intervention, which NATO or the US could not counteract after having allowed the Alliance’s eastern neighborhood to remain a security vacuum. Russia’s assault on Ukraine since 2014 has, if anything, confirmed that logic within NATO. The Alliance has introduced some long-overdue policy corrections vis-à-vis Russia since 2014, but those have not translated into a strategic offer to integrate Georgia, or at least train and equip the Georgian army for homeland defense.

The Warsaw Summit’s final communiqué contains a catch that recurs at each summit (this time also included verbatim in the NATO-Georgia Commission’s own communiqué from Warsaw): “At the 2008 Bucharest summit, Allies agreed that Georgia will become a member of NATO, with a Membership Action Plan [MAP] as an integral part of the process. Today we reaffirm all elements of that decision, as well as subsequent decisions. We welcome the significant progress realized since 2008. Georgia’s relationship with the Alliance contains all the practical tools to prepare for eventual membership” (Nato.int, July 9, para. 111).

That the MAP is “an integral part,” yet is never approved, reflects Germany’s long-held position: namely, that MAP is a required stage on Georgia’s path to membership, but NATO (for various political reasons) cannot yet approve a MAP for Georgia. The next formulation, that the Georgia-NATO relationship already contains all the practical tools to prepare for eventual membership,” implies that Georgia should do without a MAP—the missing instrument that another sentence in the communiqué describes as “integral to the process.”

Largely by default, NATO has allowed its stalling of Georgia to become a chronic problem for the Alliance’s credibility. It reflects Russia’s intimidating power, the special relations between some of the most influential NATO countries and Russia, and some Allies’ (including the US’s) own Middle Eastern predicaments, which, although partly self-inflicted, inspire them to solicit Russia’s “help” (Afghanistan, Libya, Syria, terrorism, migrations). This decade-long tendency had seemed to fade in the wake of Russia’s assault on Ukraine, but has crept back in recent months; it will probably grow further in the run-up to the US, German, and French elections.

Ahead of NATO’s Warsaw Summit, the Georgian government had campaigned all-out diplomatically for Allied approval of a Georgian MAP. By April or perhaps somewhat later, however, it became clear that this goal could not be attained at this summit either (see EDM, July 18). Nevertheless, on the summit’s eve, a joint declaration of Georgia’s political parties across their dividing lines reaffirmed Georgia’s national goal to join NATO. And after the summit, assessing its results, Prime Minister Giorgi Kvirikashvili affirmed the government’s belief in the “inevitability of Georgia’s [NATO] membership” (Civil Georgia, July 26).

In the summit’s wake, Georgia and the Allies plan to focus on the possible development of non-MAP instruments. At Warsaw, however, NATO’s Open Door policy (which NATO’s communiqués write in capital letters) failed the most relevant test—that of Georgia. 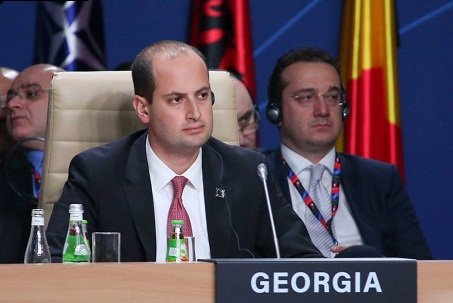 Back
NATO-Georgia: The Open Door Policy’s F..Next
Georgia May Become a Key Destination for..

The Jamestown Foundation was proud to host a conference on... END_OF_DOCUMENT_TOKEN_TO_BE_REPLACED

On June 6, Jamestown’s President Glen E. Howard was quoted by Task and Purpose in an article on Russia’s Chechen fighters in Ukraine. END_OF_DOCUMENT_TOKEN_TO_BE_REPLACED