Several paragraphs of the North Atlantic Treaty Organization’s (NATO) final Warsaw Summit communiqué (July 9) refer to long-time NATO-aspirant Georgia (Nato.int, July 9). The Alliance expressed its readiness to ramp up dialogue and cooperation with Georgia and Ukraine on strengthening Black Sea regional security. The document noted the input of Georgia and other non-NATO partner countries in the alliance’s peacekeeping activities. The communiqué confirmed its “open door” policy and encouraged the “Euro-Atlantic aspirations of Georgia.” NATO reiterated the point of the Bucharest declaration that Georgia “would become a NATO member,” but only through the Membership Action Plan (MAP) as an integral part of the accession process. The organization welcomed the significant progress in the implementation of the Substantial NATO-Georgia Package, which was initiated at the 2014 summit in Wales. NATO proposed additional practical ways to intensify efforts, including support to Georgia’s crisis management capabilities, training and exercises, and improvements in strategic communications. In addition, NATO stated that it would provide support to the development of Georgia’s air defense and air surveillance. Finally, the North Atlantic Alliance reiterated its support for the territorial integrity and sovereignty of Georgia within its internationally recognized borders. At the same time, NATO welcomed Georgia’s commitment not to use force and called on Russia to reciprocate. NATO also called on Russia to reverse its recognition of the separatist Georgian regions of South Ossetia and Abkhazia as independent states, to stop its construction of border-like obstacles along the administrative boundary lines, and to withdraw its forces from Georgia (Civil Georgia, July 9).

Immediately after the conclusion of the Warsaw Summit, Georgian Defense Minister Tinatin Khidasheli stated that her country received the “maximum possible, especially as, the question of Georgia’s membership in NATO was not discussed at NATO’s summit in Warsaw.” The minister especially noted the point about strengthening cooperation in the Black Sea and the inclusion of Georgia into the joint system of Black Sea security (1tv.ge, July 11).

Prior to the summit, top NATO officials made more far-reaching proposals regarding Georgia. For example, the Alliance’s Deputy Secretary General Alexander Vershbow proposed to grant both Georgia, and Ukraine the status of “associated partner of NATO.” Vershbow also spoke about establishing a “joint naval group” in the Black Sea, based on the formula “28+2,” which would include Georgia and Ukraine (Kommersant, April 17).

Such radical ideas, however, did not come to fruition in Warsaw; nor did the Georgian government succeed in acquiring MAP. Earlier, Minister Khidasheli repeatedly stated that if Tbilisi did not receive a “roadmap” for NATO accession, it could result in the defeat of the pro-Western forces during the parliamentary elections, scheduled for October 8, and Georgia might cease to be an independent state (see EDM, March 11).

Khidasheli later softened her rhetoric. Together with President Giorgi Margvelashili and Prime Minister Giorgi Kvirikashvili, she praised the results of the Warsaw Summit. US Secretary of State John Kerry’s visit to Georgia two days prior to the opening of the forum in Poland became the main reason for the Georgian leadership’s optimism (Civil Georgia, July 6).

Kerry reiterated the United States’ support for Georgia’s NATO aspirations and signed with Prime Minister Kvirikashvili the “Memorandum to Expand Defense Cooperation.” According to the US Secretary of State, Washington was prepared to “improve the interoperability, sustainability, and deployability of Georgia’s forces […] to be able to work and cooperate with the other forces of NATO.” In the context of Georgia’s security, the memorandum for the first time noted the need for joint evaluations of threats, including threats to US military equipment and personnel deployed on Georgian territory. The US is also prepared to supply defense weaponry to Georgia (Civil Georgia, July 6).

Georgian officials do not regard the US-Georgian memorandum as a “consolation prize” in place of MAP. An analyst with the news agency GHN, Nika Imnaishvili, explained that, “Since the leading European NATO members are not prepared to accept Georgia into the Alliance yet or to give us MAP, the US is demonstrating that it intends to cooperate with Georgia within the NATO framework, but on a bilateral basis, which does not contradict US obligations.” Although Moscow successfully pressured Berlin and Paris to reject a “roadmap” for Georgian membership, the Kremlin cannot force European countries to obstruct US-Georgian bilateral defense cooperation, he noted (Author’s interview, July 12).

The US-Georgian memorandum is one important step in the latter country’s evolving relationship with the Alliance. During the latest meeting of the NATO-Georgia Commission, in Warsaw, the organization also unveiled new initiatives for supporting the development of Georgia’s air defense system (Civil Georgia, July 8). Specifically, Tbilisi has asked the Alliance to help bolster the capabilities of the air defense system Georgia had agreed to purchase earlier from France (its delivery is still forthcoming). Last month, in a meeting in Paris with her French counterpart, Defense Minister Jean-Yves Le Drian, Khidasheli announced that the Georgian air defense system would be fully integrated with NATO’s broader system “from the very first day in January 2017—when we start the implementation of the active phase of the French agreement” (Civil Georgia, June 14). During the Warsaw Summit, NATO stated that the Allies will provide support for the development of Georgia’s air defense and air surveillance. Furthermore, the Alliance pledged to support Georgia’s efforts to reform its cyber defense system, military aviation and logistics (Civil Georgia, July 8).

Dr. Vakhtang Maisaya, a former advisor to Georgia’s permanent representative to NATO, said that the Alliance’s decision to establish a joint naval group in the Aegean Sea, rather than in the Black Sea, was disappointing. Nonetheless, NATO expressed its full political support for Georgia. “Importantly, in September, a NATO council session will convene in Tbilisi. In November, new joint NATO-Georgia military exercises will take place on the territory of our country. Thus, the Alliance demonstrates it does not intend to abandon our country one-on-one with Russia,” Maisaya argued (Author’s interview, July 11).

Although NATO did not take any radical steps toward Georgia in Warsaw, optimists note the process must be looked at with the proper perspective. Georgia’s relations with the world’s most powerful military alliance are much closer now than several years ago. In the past, despite general declarations of preparedness to accept Georgia into NATO, member states like the US and France did not develop bilateral relations with Georgia comparable to their more recent deals on air defense and defensive weaponry sales. Now, Georgia has such deals from leading NATO member countries, and more can be expected. 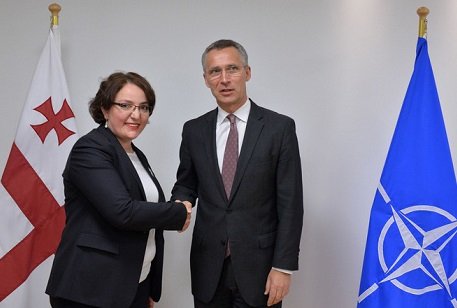 The Jamestown Foundation is proud to present a webinar on China’s... END_OF_DOCUMENT_TOKEN_TO_BE_REPLACED

On May 18, Senior Fellow Janusz Bugajski participated in a panel hosted by the European Conservatives and Reformists Group in the European Parliament, titled “The... END_OF_DOCUMENT_TOKEN_TO_BE_REPLACED