The attempted coup by factions of the Turkish military calling themselves the “Turkish Peace Council” backfired and failed in less than 24 hours. Friday’s abortive takeover bid was led by a group of military officials with influence in the Air Force and Gendarmerie; and the center of the action was the Akıncı Air Base, near the capital city of Ankara.

Analysts speculate that the coup’s motivation and its timing was driven by an operation to arrest of a number of army officers on July 9 (Haberturk, July 9), coupled with rumors that July 16 would bring even many more arrests. This led the plotters to launch their uncoordinated attempt on July 15 (Cumhuriyyet, July 15). Essentially, the attempt was disorganized and chaotic, which is how the government was able to quash it so quickly.

The primary aim of the plotters was to convince top Turkish military commanders, including Chief of the General Staff Hulusi Akar, to join. If he had, the coup would have achieved sufficient operational capabilities for success since all the army units would likely have followed. But when the majority of the high-ranking Turkish military leadership declined to back the operation, the solution was to hold them hostage. The leaders of the coup then used the General Staff to send instructions to all army units, thereby creating the impression that the putsch was institutionally backed and supported by all high-ranking officers (Cumhuriyyet, July 17).

The failure to gain that institutional support from most of the top brass in part predetermined the fate of the coup. But an important role in quashing the attempt was also played by the commander of Turkey’s First Army, General Ümit Dündar. According to security analyst Metin Gurcan, General Dündar informed President Recep Tayyip Erdoğan about the plot. He convinced the president to come to Istanbul instead of going to Ankara, assured him of his security, and informed him that Army units and many others opposed the coup (T24.com.tr, July 17). Dündar has been rewarded for his loyalty: he was made acting Chief of Staff to replace General Hulusi Akar (Hurriyet Daily News, July 16), indicating that head of state fully trusted Dündar’s account of events.

The second reason for the coup’s failure was its timing. It was originally planned for the following morning, July 16, but the chief of the General Staff learned of the plan at 17:00, on July 15 (Milliyet, July 17). This led the plotters to believe that government units and Turkish intelligence would have the same information, and that they would need to act quickly if they were to have any chance of success. The decision to hastily launch the attempt at 22:00 on July 15 led to several failures: they could not capture many strategic institutions, while the maneuvers were chaotic and not pinned to strategic targets. Instead, the insurrectionists made the error of opening fire on the National Assembly, where all the members of parliament gather. This destroyed their chances of gaining the political support they had expected. Ultimately, the putschists were doomed from the start, given their failure to design a strategy that ensured, first of all, institutional support. The resistance of the police forces and the intelligence services also helped to defeat the coup.

As for the Justice and Development Party (AKP) government and President Erdoğan in particular, their mistake was the failure to build strong institutional trust with the military leadership. This dates back to the Balyoz (Sledgehammer) and Ergenekon trials, in which hundreds of Turkish military officials were charged with conspiracy to overthrow the state. No one in the government mistrusted the grounds for these cases until late 2013, when the authorities declared that several military officers had been convicted under false charges. In March 2015, the whole case was dismissed because the evidence was found to be fabricated. Since then, and prior to the aforementioned July 9 operation against a number of army officials, the AKP government likely expected an attempted bid for power by the military. Indeed, in March 2016, such speculation permeated the media, though the General Staff provided an official denial (Deutsche Welle, March 31).

The Turkish president ended up being right to rely on the loyalty of the military leadership and that of other security forces. But Erdoğan and the AKP government miscalculated the level of protest and resentment the July 9 law enforcement operation would raise within the Armed Forces. Erdoğan may have expected more limited pushback. Military protests short of a coup would actually have helped to politically justify the government’s planned large-scale “clean-up” operation within the broader military—including the expected purging of 1,000 alleged Gülenists, followers of Pennsylvania-based Turkish cleric Fethullah Gülen, a former ally of the AKP government—during an upcoming meeting of the Supreme Military Council, on August 2 (Daily Sabah, July 12).

In a broader perspective, the position of the military leadership had been weakened over the past few years, while the police force was strengthened thanks to the influence of the ruling elite. For the military leadership, a failed coup in a situation where the government is strongly backed by the population would be political suicide, leading to the risk of civil war. Thus, the leading post-coup narrative that the July 15 coup was a Gülenist plot suits the army well, allowing the institution to retain its high moral standing in society.

In the short term at least, the failed coup may actually help Erdoğan. He can now build on the narrative of triumph, while his survival strengthens his political capital. However, it is hard to say whether he will enjoy carte blanche for further actions. Opposition to the coup does not necessarily translate to support for Erdoğan and the AKP. Similarly, the military leadership’s continued loyalty to the government is not automatic. If, in the July 15 coup’s aftermath, Erdoğan is seen to be conducting a “witch hunt” within the Armed Forces, the already strained relationship will be under serious threat. The government’s response prior to the Supreme Military Council’s upcoming meeting, if it goes ahead on August 2 as planned, will shed light on the likely trajectory of events in Turkey—particularly, regarding relations between the army and the executive. 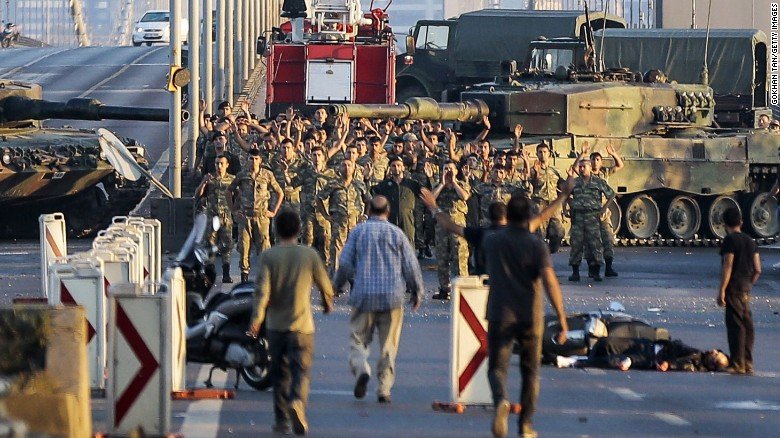 The Jamestown Foundation is proud to present a webinar on China’s... END_OF_DOCUMENT_TOKEN_TO_BE_REPLACED

On May 19, Voice of America posted an interview with Dr. Richard Arnold on the topic of Russian Cossacks’ involvement in the war against Ukraine. END_OF_DOCUMENT_TOKEN_TO_BE_REPLACED