The Georgian breakaway territory of South Ossetia has had rocky relations with the Georgian authorities since the late 1980s. After Georgia declared its intention of independent statehood, some South Ossetian activists called for the republic to secede from Georgia and stay with Russia, where their ethnic kin resided. Violence soon ensued, but Moscow brokered a peace agreement between South Ossetia’s self-proclaimed government and Georgia in 1992. In August 2008, Russia went to war with Georgia after what Moscow claimed was a Georgian attack on Russian peacekeepers in the region. Russia quickly followed up with the formal recognition of South Ossetia as a sovereign country, which Georgia and its Western allies protested.

Georgian culture has always been widely represented in neighboring North Ossetia due to the cultural and geographic proximity between the two. A large Georgian diaspora resides in North Ossetia. At the moment, however, many South Ossetians appear to be concerned that a potential Russian-Georgian rapprochement could undermine Russian support for South Ossetia. Some of the South Ossetians who protested in front of the former Russian Embassy in Tbilisi accused the Rustavi ensemble of supporting Ukraine (Onkavkaz.com, March 29).

In addition, the South Ossetians and North Ossetians have come to realize that they may have quite different interests in connection with Georgia. While the South Ossetians have been in conflict with Georgia for the past two decades, the North Ossetians have often engaged in mutually beneficial trans-border trade and transit. The Georgian Military Highway crosses the Caucasus Mountain Ridge in the area of Stepantsminda (a.k.a. Kazbegi) and Upper Lars. Much of the traffic to landlocked Armenia goes via that highway, which brings benefits to both North Ossetia and Georgia. The potential for trans-border trade is also quite high, and businesses on both sides of the Georgian-Russian border probably realize that as well.

Despite the regular proclamations of “brotherhood” and “solidarity,” the material interests of South Ossetia and North Ossetia often set them apart. The scandal around the Georgian dance group’s concert was the latest manifestation of these differences. 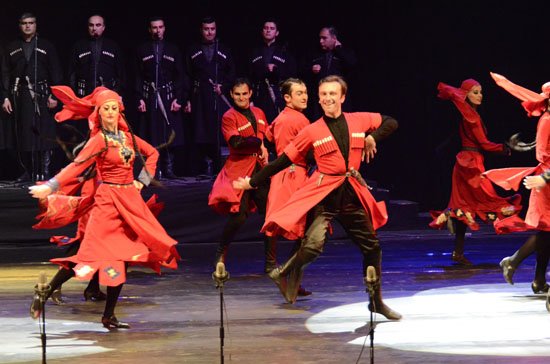 Back
Is the Ruling Georgian Dream Coalition D..Next
Latvia Strives to Modernize Its Command ..

The Jamestown Foundation was proud to host a webinar on... END_OF_DOCUMENT_TOKEN_TO_BE_REPLACED

Jamestown Foundation Analyst Richard Arnold was interviewed by PolitiFact for a story on the Lie of the Year 2022, or Putin’s long list of lies... END_OF_DOCUMENT_TOKEN_TO_BE_REPLACED

The September 2019 issue of Militant Leadership Monitor features a brief on Syed Salahuddin, the Hizbul Mujahideen chief who might still be able to affect the ongoing crisis in Kashmir; an examination of the ‘swashbuckling’ millionaire-turned-politician Sheikh Khamis Farhan Ali al-Khanjar al-Issawi in Sunni Iraq; a look at the... END_OF_DOCUMENT_TOKEN_TO_BE_REPLACED