The Belarusian government responded in a rather conciliatory manner to the decision by President Barack Obama to extend by one more year the United States’ travel sanctions on a number of Belarusian officials (Naviny.by, June 15). Still, the press secretary of the Belarusian Ministry of Foreign Affairs, Dmitry Mironchik, recommended that the White House pay attention to the “absurdity” of some formulations in the US President’s executive order regarding the sanctions (Belta, June 11). In particular, he questioned the assertion that “the actions and policies of certain members of the Government of Belarus and other persons to undermine Belarus’s democratic processes or institutions, to commit human rights abuses related to political repression, and to engage in public corruption continue to pose an unusual and extraordinary threat to the national security and foreign policy of the United States ” (The White House, June 10). This wording goes back to June 16, 2006, when the sanctions were fist announced, and even to 2004, when the Belarus Democracy Act was adopted by the US Congress. Consequently, Mironchik observed that the White House’s decision rubberstamps the previous formulations and does not take into account the ongoing change in US-Belarusian relations; he expressed hope that the tenth year of US sanctions against Belarus will be the last (Tut.by, June 13).

The notion that the Belarusian political regime ever presented an “extraordinary threat” to the national security of the United States seemed like an exaggeration even back in 2004–2006. At that time, though, Belarus’s international name recognition was abysmally low, so the wording raised few eyebrows. By now, however, Belarus has successfully raised its global profile, in part due to its contribution to mediating the Russian-Ukrainian conflict. Moreover, the number of Western experts versed in the country has noticeably grown. Even the tone of official Belarusian-US contacts as well as their frequency have sustained a favorable change (US-Belarus Observer, April 2016, pp. 4–5). Finally, the European Union and Canada have canceled most of their respective sanctions against Belarus.

In this light, the opinions of some Belarus-based commentators about the extension of the US sanctions sound credible. Thus, Andrei Porotnikov, who directs the Belarus Security Blog project, opined that “Belarus is simply 589th among American priorities” (Naviny.by, June 15). Also, Nikolay Radov, a Minsk-based writer for the Russian information agency Regnum, suggested that “Obama just did not bother to lift the sanctions and assigned this task to the new master of the White House,” although based on the actual dynamics of US-Belarusian relations, he could have lifted the sanctions already. According to Radov, however, sanctions will likely be left in place until Belarus stops being the ally of Russia (Regnum, June 13).

Meanwhile, some bizarre interpretations of the extension of US sanctions include a statement by the “independent analyst Jay Mercury,” which is being widely circulated in the Russian-language sections of the Internet. In an article titled “Lukashenka Showed the Middle Finger to American Intelligence,” Mercury alleges that President Alyaksandr Lukashenka reportedly received a Central Intelligence Agency (CIA) delegation that made some “tempting offers” to the Belarusian leader to “escalate his conflict with Russia” in exchange for some benefits, to which Lukashenka said “no” (Net Tsenzure, June 10). No trace of an analyst named “Jay Mercury” can be found on any English-language websites; likewise, it is unlikely any CIA delegation paid a visit to Lukashenka. So the entire piece is likely a hoax. But it can also be seen as an attempt to somehow rationalize Obama’s executive order, which is indeed not easy to explain to the general public.

On Belarus’s opposite geopolitical flank, problems abound as well. At the end of May, the 28th Motorized Rifle Brigade of the Russian Armed Forces was transferred from Ekaterinburg to the town of Klintsy, Bryansk Oblast, next door to Belarus. That this piece of news received an apprehensive reaction from the Belarusian opposition is understandable. However, even the government-controlled media expressed unease about that redeployment, which naturally caught Russia’s attention. Staunchly “patriotic” Russian outlets like Regnum predictably expressed their rage. But anger also poured forth from moderate Russian media sources. For instance, Lenta.ru rebuked Minsk for using the fact of the brigade’s relocation to bolster Belarus’s reconciliation with the West. In particular, Lukashenka’s statement during the ceremony of the new Polish ambassador handing over his credentials angered the Russians. “Both countries,” said Lukashenka, “share a common responsibility for regional security.” In the opinion of the Lenta.ru author, “Lukashenka yet again set the military-political alliance of Belarus and Russia apart from the notion of European security” (Lenta.ru, June 9).

Meanwhile, Minsk’s conflict with Moscow over the price of Russian natural gas has yet to be resolved (see EDM, June 15), even though Lukashenka and Putin met in the Belarusian capital on June 8 as part of the third Forum of Regions of Russia and Belarus. According to Gazprom, Belarus’s debt has already climbed to $200 million. Some commentators observed that the meeting left a “strange aftertaste.” The gas price issue remained unsettled. In addition, Putin rebuked his colleague for Belarus continuing to repackage and then export embargoed Western foods to Russia. Moreover, the decline in bilateral Russian-Belarusian trade continues, albeit at a declining rate (Salidarnast, June 10).

Finally, Belarus’s enduring economic slump has intensified the domestic debate about the economy. Much like in Russia, where Alexei Kudrin and Sergei Glazyev lead two opposing schools of thought on how to reverse the crisis (see EDM, June 14), in Belarus, the counterparts of those gurus are Kiril Rudyi, a current economic advisor to Lukashenka, and Sergei Tkachev, a former advisor. Whereas Rudyi is an economic liberal, Tkachev champions a dirigiste economy. Each side has its own prescriptions as to what to do with the country’s industrial giants like Belaz (heavy trucks for mining operations) or MAZ (trucks), which, according to the liberals, cannot compete in the modern globalized economy (Tut.by, June 13).

In summary, there are plenty of unaddressed problems in Belarus. But the current conduct of big external players is not helpful in addressing them in a way accommodating to this Eastern European country. 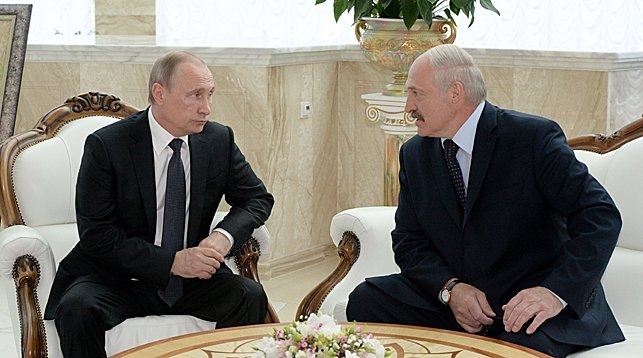