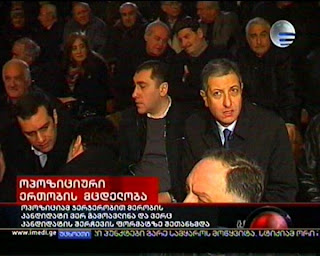 February 24 was a decisive moment in ex-prime minister of Georgia Zurab Noghaideli’s indefatigable effort to consolidate the pro-Moscow forces in Georgia’s fragmented opposition. Irakli Alasania, who had been seen as a pro-Western alternative to President Saakashvili’s liberal government, has abandoned his allies in the Alliance for Georgia, a moderate opposition amalgamation, and sided with Zurab Noghaideli. The U-turn made by Alasania, Georgia’s former envoy to the United Nations, is more significant than a mere shift of allegiances from one opposition camp to another. It demonstrates the radical opposition’s determination that Tbilisi’s quest to remain free and integrate with the West is not only futile but inexpedient as well.

Before February 24, Alasania was the Alliance for Georgia’s candidate for Tbilisi mayor in the local elections scheduled for May 30. He was going to run against the incumbent mayor, Gigi Ugulava, backed by President Saakashvili’s United National Movement, and against a candidate that the Noghaideli-led coalition would choose in a primary election or in some other fashion. Now that Alasania has joined the pro-Russian camp, even if this were an arcane political maneuver, not only is his candidature under serious doubt, but, as some analysts predict, Noghaideli’s coalition will purposely select a more hawkish, street-type figure such as Levan Gachechiladze to run against Ugulava, who has approval rates much higher than any oppositionist does. Notably, Gachechiladze and his partners shredded up their MP identifications and refused to enter parliament after the 2008 elections. Since then they have eyed street protests as the only way to a “regime change” in Georgia, and Noghaideli too has repeatedly threatened an uprising if “public mood is not reflected” in the results of the upcoming local elections.

A gathering, organized by Noghaideli in Tbilisi’s Chess Palace on February 24 to showcase opposition unity attracted almost the whole gamut of anti-Saakahvili and anti-liberal worriers ranging from the “patriotic” and nationalistic intelligentsia to radical political leaders. Having become the number one media event of the day, covered by all Georgian national TV channels, the meeting was reminiscent of the developments preceding the November 2007 and April 2009 opposition functions invariably aimed at President Saakashvili’s ouster.

Unlike past events when one could only ruminate about Moscow’s involvement and just draw a logical chain between the Kremlin’s strategy and Georgian radicals’ own aspirations – which would have been downplayed as “irrelevant” in Western capitals, especially in Brussels – now Russia’s direct involvement is not only doubtless but is so brazen that one can easily conclude that Russia and its junior partners in Georgia’s radical opposition are playing an open game.

Noghaideli has traveled five times to Moscow in less than three months, met with Putin once or twice, and concluded a pact of friendship with Russia’s ruling United Russia party. Shortly before organizing a pro-Kremlin gathering in Tbilisi he visited Brussels, apparently to tell the Europeans that he enjoys Putin’s backing and is therefore the man who can work out relations with the Russians. Is Brussels not fed up with Saakashvili’s “quixotic” attempts to bring his nation into Europe and the Euro-Atlantic fold? Are not Georgia’s outstanding issues of freedom, sovereignty and territorial integrity too much of a burden for Europe to be displeased with a new man in charge of Georgia who would sacrifice those issues to the noble cause of peace with Russia? Is not “calm” more important than freedom, liberty and democracy, especially when it comes to a country in the remote Caucasus, whose strategic significance is still doubted in Western capitals? These are the issues one needs to consider when contemplating the Kremlin’s growing audacity and Europe’s debilitating fatigue.

Indeed, one rationale for Alasania, an erstwhile Western darling whose zigzagging path to his political self-esteem over the course of one and half years oscillated under the influences and incentives from the West and Russia, could be a solid realization that bandwagoning with the pro-Russian camp is politically more rewarding than being the leader of the only pro-Western force in Georgia’s non-parliamentary opposition. While Noghaideli boasts of his meeting with Putin and runs his party ad on Georgian TV featuring his handshake with the Russian master, Alasania’s shier past experience could only brandish his encounter with Sergei Lavrov, Russia’s foreign minister, on the sidelines of the Munich Security Conference in early February. But now that he has come out in the pro-Kremlin camp, Alasania has plenty of room to expand his list of Russian encounters. Incidentally, following the gathering of Georgia’s pro-Russian forces, he received an invitation to visit Moscow from a Georgian with direct access to the Kremlin.

The Noghaideli gathering in Tbilisi occurred a day before Georgia marked the 89-year anniversary of the Russian invasion on February 25, 1921 when independent and democratic Georgia was toppled by Bolshevist hordes in a fresh wave of Russian expansion. Now that the Kremlin has already succeeded in dismembering Georgia, it badly needs a government in Tbilisi that would legitimize Russia’s new order. Since pro-Russian forces in Georgia lack public support to achieve this through constitutional means, the day may be nearing, many Georgians fear, when Russian tanks will show up in the Kremlin’s already open quest for Georgia. The only way for this day to never arrive is if the Georgian people’s pro-Western course and the United States’ and Europe’s support for Georgia become more substantial on the ground.

Back
In Ukraine, Tymoshenko heads to the oppo..Next
Ukraine: Can Yanukovych Force Tymoshenko..

The Jamestown Foundation is pleased to host the webinar, “The... END_OF_DOCUMENT_TOKEN_TO_BE_REPLACED

The February 2022 issue of Militant Leadership Monitor features a piece on Malaysia’s most wanted terrorist, Mundi Sawadjaan. The issue follows this brief up with a look into Muhammad Kawtharani, Hezbollah’s central operative in Iraq. The final two pieces are post-mortem analyses of two influential militants: Mufti Khalid Balti... END_OF_DOCUMENT_TOKEN_TO_BE_REPLACED