The leaders of seven Syrian militant Islamist armed opposition groups announced the formation of al-Jabhat al-Islamiya (Islamic Front) on November 22 with the stated purpose of uniting their disparate fighting groups into one coalition. The coalition has a strategy to present a popular political alternative to President Bashar al-Assad’s government, militarily defeat the al-Assad regime and establish an Islamic state in Syria. Al-Jabhat al-Islamiya includes several of the most powerful Syrian armed opposition groups currently fighting in the country’s civil war, including Harakat Ahrar al-Sham al-Islamiya (Islamic Movement of the Free Ones of the Levant); Liwa al-Islam (Islamic Brigade); Alwiya Suqur al-Sham (Hawks of the Levant Brigades); and Liwa al-Tawhid (Divine Unity Brigade). Three other armed opposition groups, Liwa al-Haqq (Divine Truth Brigade), Ansar al-Sham (Partisans of the Levant) and Jabhat al-Akrad al-Islamiya (Kurdish Islamic Front) have also joined the coalition. [1] Combined, the constituent fighting groups within al-Jabhat al-Islamiya are believed to have as many as 50,000 fighters (Janes Terrorism & Insurgency Centre, November 24). The armed opposition groups that are forming the coalition are actively engaged against the al-Assad government throughout Syria, particularly in and around the northwestern governorates of Idlib and Aleppo, in the central western governorates of Homs and Hama and in Damascus and its suburbs (al-Jazeera, November 22).

Prior to the start of the Syrian uprising, three of the leaders of the most powerful constituent fighting groups within al-Jabhat al-Islamiya were imprisoned in the infamous political prison of Saidnaya, north of Damascus (al-Sharq al-Awsat, November 23). The leaders, Shaykh Hassan Abboud of Harakat Ahrar al-Sham al-Islamiya, Shaykh Zahran Alloush of Liwa al-Islam and Shaykh Ahmad Issa of Suqur al-Sham, were released from Saidnaya Prison in June 2011 as part of a Syrian government policy to appease the country’s nascent opposition movement (Sidonia News [Saida City], October 18; for more information on Zahran Alloush, see MLM Briefs, October 2013). Shaykh Ahmad Issa is the head of al-Jabhat al-Islamiya’s shura (consultative) council, Shaykh Hassan Abboud is the head of the coalition’s political bureau and Shaykh Zahran Alloush is its military commander (al-Jazeera, November 22). Al-Jabhat al-Islamiya’s coalition leadership is likely to be strengthened, and its wider organizational asabiya (group cohesion) made more robust, by several of its leaders’ shared experience as Islamist activist political prisoners prior to the Syrian revolution and by the coalition’s consensus objective of establishing an Islamic state in Syria.

One of the most prominent leaders within al-Jabhat al-Islamiya is Shaykh Hassan Abboud (a.k.a. Abu Abdullah al-Hamawi). He is the commander of the militant Salafist group Harakat Ahrar al-Sham al-Islamiya, potentially the most powerful armed opposition group within the larger organization of al-Jabhat al-Islamiya (for more information on the group, see Terrorism Monitor, April 4, 2013).

Asserting that Harakat Ahrar al-Sham al-Islamiya was intended to be a unified political and military movement, Shaykh Abboud states that he and his comrades in the Salafist organization had participated in political demonstrations against the Assad government after his release from Saidnaya Prison. They formed the armed opposition group Katiba Ahrar al-Sham (Free Ones of the Levant Battalion), which would form the basis of Harakat Ahrar al-Sham in response to violence against demonstrators by the Syrian security forces (al-Jazeera, June 19).

Shaykh Abboud, believed to be in his mid-30s, is from the central western Syrian governorate of Hama, as indicated by his nom de guerre, al-Hamawi (Syria Truth [Damascus], October 20). He supports the establishment of an Islamic state in Syria and asserts that minority rights, particularly those of religious minorities, would be protected under the limits of Shari’a. Shaykh Abboud believes that many Syrians in the opposition would support the establishment of an Islamic state. He also asserts that it is Harakat Ahrar al-Sham al-Islamiya’s goal to eventually destroy the national boundaries that established the present-day nations of the Balad al-Sham (the historical Levant, including Lebanon, Syria, Jordan, Palestine and Israel) that were created by the British and French empires after World War One and institute a single Islamic state to rule over the entire area (al-Jazeera, June 19).

1. “Statement of the Merger of Fighting Factions under the Name of the Islamic Front,” al-Jabhat al-Islamiya YouTube page, November 22, 2013, www.youtube.com/watch?v=4OxjMCnkBVA.

Shaykh Ahmad Issa (a.k.a. Abu Issa), the head of al-Jabhat al-Islamiya’s (Islamic Front) Shura (consultative) Council, has been described as the group’s overall leader. It was Shaykh Issa who announced the merger and the coalition’s aims in an online statement (al-Sharq al-Awsat, November 23). Issa said: “This independent political, military and social formation aims to topple the al-Assad regime completely and build an Islamic state where the sovereignty of God almighty alone will be our reference and ruler” (Hurriyet, November 22).

Shaykh Issa, 41, was born in the town of Sirja, located in the central region of the northwestern governorate of Idlib. Before the Syrian uprising began, Shaykh Issa ran a grocery store (al-Sharq al-Awsat, June 22, 2012). In 2004, he was arrested and detained in Saidnaya Prison by the Syrian government for being an Islamic activist. [1] Shaykh Issa comes from a family of political activists; his father reportedly disappeared after being imprisoned by the Hafez Assad regime in the 1980s (BRQ News Network [Damascus], December 11, 2012). In addition, three of Shaykh Issa’s brothers as well as his son were reportedly killed in fighting during the Syrian civil war (BRQ News Network [Damascus], December 11, 2012).

Shaykh Issa is the leader of the Suqur al-Sham brigade of Idlib province, originally formed from a small resistance movement armed with hunting rifles and weapons taken from Syrian soldiers (al-Jazeera, May 3). Shaykh Issa states that Suqur al-Sham fighters include defected Syrian military soldiers and civilians who seek the overthrow of the Assad government (al-Jazeera, June 13; May 3). Under Shaykh Issa’s leadership, Suqur al-Sham has been actively fighting against the Syrian military in the governorate of Idlib, particularly in the area of Jabal al-Zawiya and the region around the town of Ma’rat Numan (al-Aan [Dubai], August 12, 2012). The Suqur al-Sham brigade is known for having access to funds and resources (al-Sharq al-Awsat, June 22, 2012).

Shaykh Issa is also well known for his strategy of seizing Syrian government checkpoints along the M45 Highway in order to cut off the Syrian military’s logistical route between the cities of Hama, Idlib and Aleppo (al-Jazeera, June 13; January 30). Shaykh Issa has brokered Alwiya Suqur al-Sham’s membership in the Free Syrian Army (FSA) and the Syrian Islamic Liberation Front (SILF). Prior to leading Alwiya Suqur al-Sham into the coalition of al-Jabhat al-Islamiya, Shaykh Issa served as the commander of the SILF (al-Jazeera, June 13; November 3, 2012).

Shaykh Issa is an outspoken leader who, along with the now deceased former leader of Liwa al-Tawhid, Shaykh Abd al-Qadr Salah, emerged as a popular figure in the Syrian revolution (see September 2013 MLM Briefs). He has frequently been interviewed by Arabic language media in regard to ongoing events in the civil war. Shaykh Issa maintains an active and popular Twitter account with the user name of “aleesa71” and an official Facebook page. [2] Shaykh Issa states that he supports the rights of religious minorities within the context of a state guided by Shari’a (al-Jazeera, June 13].

1. “Urgent Appeal for the Release for Four Citizens of the Province of Idlib,” Syrian Human Rights Committee, September 23, 2004, www.shrc.org/?p=8014. 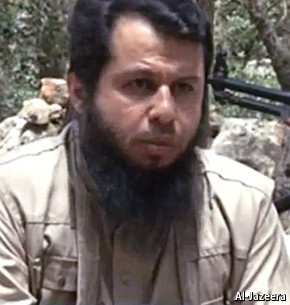 The Jamestown Foundation is pleased to present a webinar on... END_OF_DOCUMENT_TOKEN_TO_BE_REPLACED

On November 17, Jamestown Foundation Senior Fellow Olevs Nikers was interviewed by Romania-based outlet Veridica regarding, among other topics, the best possible outcome for the... END_OF_DOCUMENT_TOKEN_TO_BE_REPLACED

The October 2021 issue of Militant Leadership Monitor features a piece on the affirmed death of jihadist Mokhtar Belmokhtar and his legacy of spreading influence of al-Qaeda in the Islamic Maghreb (AQIM) throughout the Sahel; the leadership of Mullah Muhammad Hassan Akhund as the inaugurated Prime Minister of the... END_OF_DOCUMENT_TOKEN_TO_BE_REPLACED