Roger N. McDermott specializes in Russian and Central Asian defense and security issues and is a Senior Fellow in Eurasian Military Studies, The Jamestown Foundation, Washington DC; Senior International Research Fellow for the Foreign Military Studies Office (FMSO), Fort Leavenworth, Kansas; Honorary Senior Research Fellow, Department of Politics and International Relations, University of Kent at Canterbury (UK). McDermott is on the editorial board of Central Asia and the Caucasus and the scientific board of the Journal of Power Institutions in Post-Soviet Societies. His articles regularly appear in scholarly journals including the Journal of Slavic Military Studies, as well as weekly assessments of security developments in Russia and Central Asia, Eurasia Daily Monitor (The Jamestown Foundation).

Jacob W. Kipp retired from federal service in September 2009 and is currently an Adjunct Professor at the University of Kansas and a weekly columnist on Eurasian Security for the Jamestown Foundation.  He received his PhD. in Russian History from the Pennsylvania State University in 1970. From 1971 to 1985 he taught Russian and Military History at the Kansas State University.  In January 1986 he joined the newly founded Soviet Army Studies Office (SASO) at Ft. Leavenworth, Kansas, as a senior analyst. In 1991, SASO became the Foreign Military Studies Office (FMSO).  In 2003, Dr. Kipp became director of FMSO and served in that capacity until October 2006, when he joined the School of Advanced Military Studies (SAMS) as Deputy Director. He has published extensively on Russian and Soviet naval and military history.  Topics have included Russian naval reform in the 19th century, Soviet naval history and analysis, operational art in theory and practice, and foresight and forecasting in Russian and Soviet military affairs.  From 1992 to 2001 he served as the US editor of European Security.  His most recent publications are:  "Military Theory, Strategy, and Praxis,"  co-authored with Dr. Lester Grau, Military Review, (March-April 2011), pp. 12-22 and  "Russian Military Doctrine: Past, Present, and Future," in: Stephen J. Blank, Russian Military Politics and Russia’s  2010 Defense Doctrine, (Carlisle Barracks: PA: U. S. Army War College, Strategic Studies Institute, 2011), pp. 63-153. 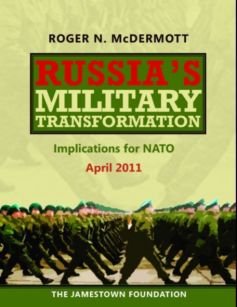 Back
The Impact of Arab Uprisings on Regional..Next
The New Geopolitics of the North Caucasu..

Join The Jamestown Foundation on April 15th at 1 PM... END_OF_DOCUMENT_TOKEN_TO_BE_REPLACED

On April 14, Politico published an article on the Ukrainian Armed Forces that included commentary from Jamestown analyst Mykola Vorobiov, relating his observations of troop... END_OF_DOCUMENT_TOKEN_TO_BE_REPLACED

The November 2020 issue of Militant Leadership Monitor features a brief on Radullan Sahiron, the Abu Sayyaf leader who is growing closer to Islamic State; a look into Shaykh Abukar Ali Adan, the new leader of al-Shabaab; a profile of Mawlawi Abdul Hakim, the Taliban’s chief negotiator at the... END_OF_DOCUMENT_TOKEN_TO_BE_REPLACED