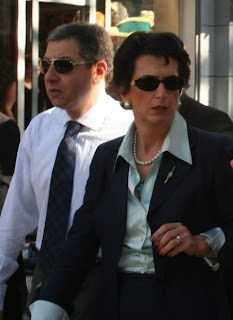 All public opinion polls that have been conducted in Georgia over the past several months show dismal performance of the pro-Russian opposition figures and the ad hoc alliances they have created in the run-up to the crucial local elections scheduled for May 31.

First came the results of the survey by the International Republican Institute (IRI), published on March 31, which gave low single-digit rates to the parties and their leaders closely associated with the Kremlin, while the ruling party, United National Movement and its mayoral candidate Gigi Ugulava scored relatively well with 36% and 46% of public support, respectively. By comparison, the two radical pro-Russian figures, the ex-speaker of Georgian Parliament, Nino Burjanadze, and the former prime minister, Zurab Noghaideli, gleaned 4% and 3% each. The remainder of the support went to more or less moderate political leaders.

On May 11, another internationally acclaimed organization, the National Democratic Institute (NDI), published the figures of its research conducted throughout the country in mid-April. According to Georgian media, 51% of those polled “positively” or “very positively” appraised the performance of the country’s president Mikheil Saakashvili while only 11% said it was “negative” or “very negative” and 19% saw it as “neutral.” 53% of Georgians thought that their country is developing in the right direction while 20% said that the course was wrong. The 22 institutions and public figures Georgians trusted most were topped by the head of the Georgian Church, Patriarch Ilia II, the army, the police, President Saakashvili and his ruling party. The opposition, as a whole, was assessed as playing a “positive” or “very positive” role by 12% of the Georgian public, “not negative, not positive” by 35% and another 35% said they viewed the opposition’s performance as “negative” or “very negative.”

Among the mayoral candidates, Gigi Ugulava seemed to have further improved his rates from the previous IRI poll to 57%, while Georgia’s former UN envoy and now one of the eight mayoral candidates, Irakli Alasania, came in second with some 7%. Other candidates scored even lower as 15% of those polled said they were still undecided and 6% refused to reveal their preference. According to election laws, 30% plus one vote is needed to avoid a runoff and decide the Tbilisi mayor in the first round.

The NDI survey also showed that 36% wanted Georgia’s next president to be from Saakashvili’s party while little more than 8% gave their support to Giorgi Targamadze, the leader of the moderate Christian Democrats and around 8% to Irakli Alasania. Only 1% of Georgians want Noghaideli or Burjanadze to become their next president and some 32% said they did not yet know who they would vote for in the next presidential elections. Georgians will elect a new president in 2013 when Saakashvili’s second term in office expires.

On May 19, the results of the newest public opinion poll were published. This time it was carried out by CSA, a French public research institute. Saakashvili’s United National Movement has 44% of support followed by the Christian Democrats with 23% and Alasania’s Alliance for Georgia with 16%. Noghaideli’s pro-Moscow National Council is supported by a mere 7% of the Georgian public. 64 percent of those polled say that the local elections will be fair and free with 22% believing that this will not be the case. As far as the mayoral candidates are concerned, Ugulava has 57% and Alasania 14%. Zviad Dzidziguri, the candidate from the Noghaideli bloc is supported by only 6%. The French company conducted its poll between May 1 and May 4 in the capital Tbilisi, and it is worth mentioning that Saakashvili’s party traditionally enjoys even greater support outside the Georgian capital.

The same day the results of the fresh poll were announced, there came reports about Russia once again violating Georgia’s air space in areas adjacent to the zone of occupation in the Tskhinvali region. Several military aircraft conducted “unplanned” surveillance of Georgian territory. Two days earlier, Russian media reported that the Russian military personnel in the occupied Georgian territory were distributing leaflets apparently aimed to boost the morale of the Russian soldiers and their awareness about the “Georgian enemy.” The report has not been yet confirmed by Georgian authorities but media and political commentators in Tbilisi have started recalling that similar “know your enemy” leaflets had been given to Russian military units prior to the Georgia invasion campaign in August 2008.

Noghaideli and Burjanadze have been in close contact with Moscow since at least December 2009, but those contacts have further intensified lately as they have started talk of repeating the bloody “Bishkek scenario” in Tbilisi. Upon his return to Georgia from Moscow on May 11, Noghaideli said, “after Saakashvili is no longer president of Georgia, Georgian troops will participate in the victory parade in Moscow’s Red Square.” Burjanadze on her part accused Georgia of bombing its own territory during the Russian invasion in 2008.

Every time Noghaideli and Burjanadze make similar comments, their political rates see further decline suggesting a greater concern for unequivocal loyalty to their Moscow patrons than approval rates at home and in the hearts and minds of the Georgian public.

The Jamestown Foundation is pleased to host a forthcoming webinar... END_OF_DOCUMENT_TOKEN_TO_BE_REPLACED

Jamestown Foundation Analyst Kseniya Kirillova offered her expert analysis on Putin’s “partial mobilization” announcement to G-Zero. “The Kremlin calls it ‘partial’ so as not to... END_OF_DOCUMENT_TOKEN_TO_BE_REPLACED