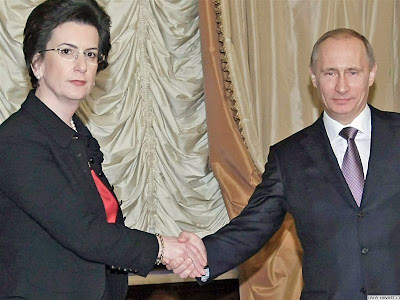 On May 26, 2011, the day Georgia celebrates its Independence Day, the Ministry of Internal Affairs made public a phone conversation, or a recording on some other electronic device, between Nino Burjanadze and her son, Anzor Bitsadze, that took place some time during the May 21 – 25 violent anti-Western and antigovernment protests she organized in downtown Tbilisi.

Burjanadze, former chairwoman of Parliament who turned into the single most important conduit of Russian schemes against Georgia’s pro-Western course, discusses with her son some gruesome details of her plan aimed at overthrowing the government of President Mikheil Saakashvili. The overthrow would materialize at the expense of hundreds of innocent civilian lives “in a civil war” and, even more importantly, with the help of the Russians. “It is worth the death of 100 or even 500 people,” Anzor suggests to his mother, to which Burjanadze replies, “Yes, you are right.” Then then discuss how many Georgians are pro-Western and how many are pro-Russian, and Burjanadze says that she has “direct” support of 15 percent of Georgians. The figure is of course greatly exaggerated given the data of every single poll suggesting that Burjanadze has never had more than 1 – 2 percent.

The last part of the mother-son conversation is about how to use the “Egypt scenario” after a coup d’état has already been carried out in Georgia, such as setting up a transitory government, declaring a state of emergency and installing a curfew. As for the Georgian security forces, Anzor says to his mother, “We will withstand the first strike and then let them deal with the GRU special task forces.” The GRU, of course, is the Main Intelligence Directorate of the Armed Forces of the Russian Federation.

In her latest desperate bid to force President Saakashvili out of office, Burjanadze organized aggressive protest rallies in the central parts of Tbilisi that attracted no more than a few thousand people at most, mainly men in their late fifties. Georgian social networks suggest that many of those who showed up at the Burjanadze demonstrations were former Soviet police and security officers and Communist Party apparatchiks who lost their jobs, influence and prestige after the liberal Rose Revolution ended Eduard Shevardnadze’s regime. Burjanadze and her supporters blocked several important streets in Tbilisi between May 21 and 25—even though the number of protesters was so small that they could well stand on sidewalks without interfering with the traffic. Police did not interfere until the protesters declared that their goal was to sabotage the Independence Day celebrations on Tbilisi’s Rustaveli Avenue scheduled for May 26.

A police officer and a civilian were killed, and another police officer was critically injured, when two cars from Burjanadze’s escort speeding away from the scene crashed with the crowd after police started breaking up the violent demonstration, the Ministry of Internal Affairs said in a statement.

Burjanadze has visited Moscow several times over the past few years and repeatedly met with Russian Prime Minister Vladimir Putin. Every time she returned from Moscow, her ambitions seemed to have increased and her plans only became more aggressive. Burjanadze never publicly called Russia’s illegal presence on Georgian soil occupation, nor has she ever qualified the events of August 2008 as Russia’s invasion of Georgia. Moscow, for its part, has never hidden its support and sympathy for Burjanadze nor other representatives of a small group of Georgia’s pro-Russian forces.

The latest events, including, the scandalous record of Burjanadze’s conversation with her son, show both the ability of Georgia’s pro-Western government to defend the nation’s sovereignty and the incessant attempts by the Kremlin to destabilize Georgia and bring it back under its suzerainty. But it is also true that until Georgia becomes a formal ally of the West, its long-term stability and security will remain under a big question mark. Greece and Turkey of the 1940s could serve as a good reminder.

The Jamestown Foundation is pleased to host the webinar, “The... END_OF_DOCUMENT_TOKEN_TO_BE_REPLACED