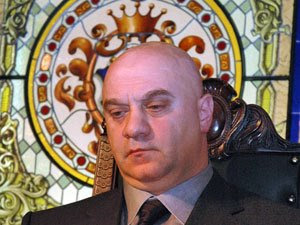 An influential member of the Parliament of Georgia and the chairman of its Committee on Defense and Security, Givi Targamadze made a number of revelatory remarks during the weekly program Position on the Rustavi 2 television channel late on May 22. Targamadze claimed that the failed mutiny at the Mukhrovani military base on May 5 was sponsored by Alexander Ebralidze, an oligarch of Georgian descent, who has been living in Russia for the past three decades and who is also known to have personal ties to the Russian Prime Minister Vladimir Putin. In particular, Targamadze noted:

“I have been refraining from naming a person who has organized everything, unless this person himself announced that after this failed mutiny he could no longer wait and would run for the presidency in the next elections – this is Mr. Ebralidze; and if there is someone who may think that in today’s Russia it is possible to be a billionaire oligarch in St. Petersburg uncontrolled by the most famous St. Petersburgian, i.e. [Russia’s PM Vladimir] Putin, is very wrong.”

Originally from Batumi and currently based in St Petersburg, Ebralidze, who does not even possess Georgian citizenship, is the General Director of the Open Joint Stock Company Talion. In 2007, the Georgian Times estimated his fortune at $300 million. It appears that Ebralidze is extremely well connected. According to Gazeta.ru, Putin’s former judo coach and presently General Director of the judo sports club Yavara-Neva, Arkadiy Rotenberg is on the Board of Directors of the Talion. In addition, among Ebralidze’s friends are the Speaker of the Federation Council (the upper chamber of Russia’s legislature – the Federal Assembly) Sergei Mironov, St Petersburg Governor Valentina Matvienko and Vice Governor Sergei Tarasov. Ebralidze’s past criminal record is equally impressive. He has been convicted twice – first time for assault and illegal possession of weapons and second time for hooliganism and resisting authorities.

Alexander Ebralidze is the President of the World Congress of the Nations of Georgia, which was established in March in Vienna, Austria, according to the outfit’s multilingual (English, Russian, Georgian and German) website and blog. The first founding convention of the World Congress of the Nations of Georgia attended by 1,500 delegates representing 14 nationalities from 18 countries was held in Sochi on May 13-15. The chief organizer of the convention was the Ossetian entrepreneur Gocha Dzasokhov, who was once close to the Georgian President Mikheil Saakashvili but who broke ranks with him in the aftermath of the August war last year, according to Komsomolskaya Pravda. Apparently undeterred by the fact that he does not have a Georgian passport, at the conclusion of the convention Ebralidze made a sensational statement proclaiming that he was ready to run for the presidency in Georgia, which caused consternation and subsequent walk-out of a small delegation of opposition figures from Tbilisi. It should be noted that the delegation from Tbilisi, among others, included the former State Minister of Conflict Resolution Georgiy Volskiy, the famous Georgian film director Revaz Chkheidze (who was elected an honorary president of the World Congress of the Nations of Georgia) and Malkhaz Gulashvili, the president of the media holding Georgian Times and the Co-Chairman of the Public Commission for the Restoration of Russian-Georgian Relations.

The resolution adopted by the aforementioned founding convention basically represented the reiteration of the Kremlin’s demands. It read, “Georgia must become a neutral, non-bloc-member country developing relations with its neighbors and all states of the world…No military threat for anyone should emanate from the territory of our motherland. Georgia should, in turn, receive international guarantees of non-interference in its internal affairs. Georgia’s most important priority must be restoration and development of good-neighborly, equal relations with the Russian Federation.”

In his interview on the Rustavi 2 Targamadze also made other important remarks regarding the pro-Russian members of the Georgian Diaspora in Russia. In particular, he alleged that the Mukhrovani mutiny organizers held several preparatory meetings in an unspecified Commonwealth of Independent States country. The prominent criminal authorities of Georgian descent, who are active in Russia – Tariel Oniani and Bondo Shalikiani – were purportedly the initiators of those meetings, according to Targamadze. It should be noted that on May 18, President Saakashvili identified Shalikiani as one of the “active sponsors” of the ongoing opposition demonstrations in Georgia, while in March, the Georgian Minister of Internal Affairs, Vano Merabishvili called Tariel Oniani as one of the active instigators of unrest.

Perhaps the best description of the main motivational factors that drive the Kremlin handlers of Ebralidze’s project is provided by the Komsomolskaya Pravda correspondent Vladimir Vorsobin, who states:

“And in Moscow they probably understood: in order to restore Russia’s influence, it will be necessary to deal with the Tbilisi political terrarium. While the disillusionment of Georgians with the U.S. policy is great and while the Tbilisi authorities are unstable, Moscow received a chance to win back from the U.S. at least a small platform for the pro-Russian politicians. In Sochi, for instance, there were already two ‘agents of influence’ – for the national majority and minority. Thus, however awkwardly and bluntly, the preparation of the political ‘landing party,’ it seems, have begun.”

The Jamestown Foundation is pleased to host a forthcoming webinar... END_OF_DOCUMENT_TOKEN_TO_BE_REPLACED

Jamestown Foundation Analyst Kseniya Kirillova offered her expert analysis on Putin’s “partial mobilization” announcement to G-Zero. “The Kremlin calls it ‘partial’ so as not to... END_OF_DOCUMENT_TOKEN_TO_BE_REPLACED