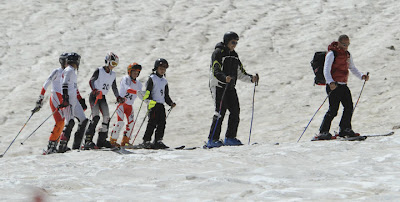 President Mikheil Saakashvili’s government recently inaugurated a new project aimed at making English a second language in Georgia, which is seen by many Georgian analysts as a linguistic revolution. At the core of this ambitious undertaking is a plan to bring to Georgia thousands of native English language teachers, mainly from Anglo-Saxon nations such as the U.S., U.K., Canada, Australia and New Zealand. The end goal is to make all Georgian youth from ages 5 to 18 English literate in the next four years. Along with increasing the accessibility to the Internet and putting emphasis on sciences, the robust English program is to help spur Georgia’s reform agenda and usher in a new generation of Westernized Georgians resistant to Russian and Soviet backlash.

Georgia’s language project is yet another phase of a broader modernization campaign the Saakashvili-led team of young Georgian leaders has embarked upon since the pro-Western Rose Revolution in 2003 unseated the corrupt regime of President Eduard Shevardnadze. Teaching English to Georgian schoolchildren is just one, albeit important, part of the Teach & Learn with Georgia project. Arguably, its scope goes well beyond linguistic paradigms and touches upon highly sensitive cultural issues so intimately that some have already dubbed the project Georgia’s Cultural Revolution. Indeed, most of the foreign teachers will go to rural areas, which gives the project additional fervor.

Developing infrastructure has long been the Georgian government’s key priority and some parts of the country, namely the capital, Tbilisi, resorts at the Black Sea and in the mountains as well as the major highways, have indeed changed and become almost unrecognizable thanks to Georgia’s own investment, the funds provided by the United States, including through the Millennium Challenge Corporation (MCC), and other foreign direct investments over the past several years. The focus of Georgia’s development projects has recently shifted to rural mountainous regions and ski resorts in both western and eastern Georgia bordering Russia across the Major Caucasus Ridge. The better infrastructure has yielded a record high number of foreign tourists this year, exceeding one million according to some estimates. To cope with “the rapidly increasing flow of visitors,” Saakashvili argues that Georgia needs not only good roads and decent hotels but an English speaking population as well. This gives additional reasoning for his robust English language campaign.

To motivate the professionals and the student population, the Georgian government announced that teachers and police officers with good command of the English language will receive bonuses in their salaries and advanced scientific degrees will no longer be granted in universities without first passing an English language proficiency test.

According to Saakashvili, Georgia is Russia’s “major ideological competitor” in the post-Soviet space and the Georgian reforms are “an alternative” to the Russian way of life. He further argues that while Georgia is increasingly associated with modernity and the future, Russia’s domestic and foreign policy agenda lags behind in the past. “Georgia is an A student and Russia is acting as a classroom bully or street vigilante,” the Georgian leader told a crowd in Anaklia, a burgeoning Black Sea resort near the Russian-occupied Georgian province of Abkhazia, where youths from different former Soviet states spent the summer with their Georgian peers. As if echoing what Saakashvili said in Anaklia, Georgia’s Minister of Education Dimitri Shashkini announced on September 14 that tough sanctions will be introduced in Georgian schools for bullying and hooliganism.

But young school offenders are not the sole opposition to Georgia’s social transformation. Retrograde clerics in the Georgian Church as well as some anti-Western political parties fiercely oppose the Teach & Learn with Georgia project as well as the policies aimed at bringing order and discipline to the Georgian school system. One of the high-ranking bishops in the Georgian Church, Iobi, recently lashed out against teaching English to first-year students, the wider use of computers among Georgian children and turning Georgia into a “tourism country.” The pro-Russian Labor Party for its part said in early August that English teachers recruited from abroad belong “to various religious sects” and they could harm Georgia’s religious and cultural identity. Most of the radical opposition likewise criticizes the measures Shashkini has taken to increase security by placing special officers, called mandaturi, and video cameras in Georgian schools, similar to the practice in the West.

The Jamestown Foundation is pleased to host a forthcoming webinar... END_OF_DOCUMENT_TOKEN_TO_BE_REPLACED

Over the past several years, the unique and widely misunderstood country of Belarus has risen to the attention of policymakers in Europe and the United States. Though for centuries an important invasion corridor across the plains of North Central Europe, its strategic importance had been overlooked by post–Cold War... END_OF_DOCUMENT_TOKEN_TO_BE_REPLACED