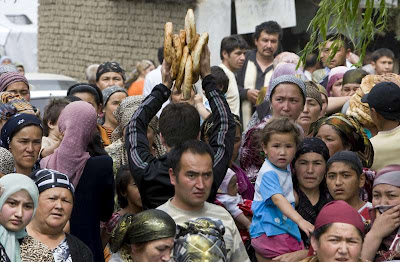 Four months after the ethnic violence in Osh and Jalalabad, an international investigation is to begin in southern Kyrgyzstan. Gathered and led by Finnish MP Kimmo Kiljunen, a group of seven experts will work on the ground to investigate the causes and consequences of the June 11-14 violence.

Anna Matveeva, a scholar from the London School of Economics, will be the lead investigator. Experts from Russia, Estonia, Turkey, Australia and other states are part of the assembly. For greater objectivity, no Kyrgyz citizen is working on the investigation.

“We are there to prevent the spread of rumors about what happened,” said Kiljunen to the media recently. Kiljunen was invited by Kyrgyz president Roza Otunbayeva to conduct an impartial investigation shortly after June 11-14 violence. Although Kiljunen has been open to the media about his plans to lead the investigation, he made the announcement about his investigation only after the October 10 parliamentary elections. By doing so, Kiljunen tried to avoid destructive criticism on the part of Kyrgyz political leaders who have been launching attacks against international involvement in dealing with the aftermath of the violence. Earlier this year, several of Kyrgyzstan’s political parties spoke against the deployment of the 52-member OSCE Police Advisory Group.

At a press-conference in Bishkek, Kiljunen emphasized that this will not be a criminal investigation but rather targeted at finding the causes of the violence. According to him, the first report will be ready in late January 2011.

Between June 11-14 over 400 people died and over 400,000, mostly ethnic Uzbeks, were forced out of their homes in the course of ethnic violence in southern Kyrgyzstan. Uzbek communities are slowly reconstructing their homes before the start of winter. But peace remains fragile in Osh and Jalalabad, with both ethnic majority and minority groups in southern Kyrgyzstan – both blaming each other for instigating fighting and infringing upon each other’s rights.

Kiljunen’s investigation will encounter numerous challenges, including skepticism among local law enforcement agencies and political leaders. The investigation is, however, vital for reconciliation efforts. If the investigation produces results which both the Uzbek and Kyrgyz populations recognize, international and local efforts to build stronger peace would receive a significant boost. Among other issues, Kiljunen’s group must address questions regarding Kyrgyz security officials’ courses of action during the first few hours after the violence began.

According to Jamestown observations, both Uzbek and Kyrgyz sides blame Otunbayeva’s government for failing to stop the violence during the first day. Also, both groups think that the real perpetrators of the violence have left the country. Kiljunen’s task will be difficult one.

Back
Georgia Expands Its Outreach to the Nort..Next
Yanukovych’s New Best Friend – Hugo ..

The Jamestown Foundation is pleased to host the webinar, “The... END_OF_DOCUMENT_TOKEN_TO_BE_REPLACED