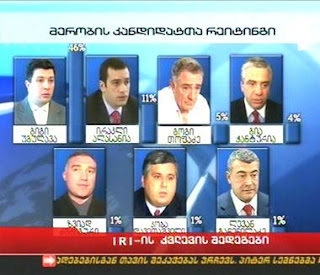 At the end of March, the International Republican Institute (IRI) unveiled the results of the public opinion research it conducted throughout Georgia – excluding the territory occupied by Russia – between March 4 and March 13. The IRI regularly studies Georgian public opinion in cooperation with other research institutions and with funding provided by the United States Agency for International Development (USAID).

This latest survey comes at a time when some 36 political parties in Georgia are engaged in the local election campaign. On May 30, the Georgians will go to the polls to elect local municipalities and in addition to that the Tbilisi residents will, for the first time, directly elect their mayor. According to the recently amended electoral code, 30% plus one vote is needed to elect a Tbilisi mayor in the first round and avoid a runoff election.

But the IRI study is interesting to see not only the party rates but also to learn how much public support is given to parties and individual politicians that the Kremlin now openly supports in Georgia. The polls show that these parties and politicians enjoy very little support, which would not be good news for the Georgia planners in Moscow.

But first, here are some peculiarities in the opposition flank: The Labor Party, the National Forum and Nino Burjanadze’s Democratic Movement-United Georgia party are not participating in the election. All three are believed to be pro-Russian or at least opposing Georgia’s liberal pro-Western course. On the other hand, the openly pro-Russian Zurab Noghaideli, Georgia’s ex-prime minister, and his political partners in the alliance called National Council do participate in the election and have their mayoral candidates.

According to the IRI results published by Georgia’s Public Broadcaster and other media sources in Georgia, the most popular candidate for Tbilisi mayor with 46% of support is the ruling party’s Gigi Ugulava, the incumbent mayor. Irakli Alasania, former envoy to the United Nations, who went into opposition to President Mikheil Saakashvili shortly after Russia’s military aggression against Georgia in 2008, is second with 11%. 9% supports no mayoral candidate and 16% of potential voters remain undecided. Zurab Noghaideli’s three political partners gather 1% each.

Regarding the approval rates of political parties, the United National Movement has 36%. The Christian Democratic Movement, a moderate pro-Western opposition force and major opposition faction in Georgian parliament is second with 10%, followed by the Labor Party and Alasania’s Alliance for Georgia with 8% and 6%, respectively. Burjanadze’s party has a mere 1% approval rate.

The poll question “who could best govern the country during the Russian aggression” was answered in the following manner: Mikheil Saakashvili – 34%, Giorgi Targamadze, leader of the Christian Democrats – 8%, and Irakli Alasania – 6%. Burjanadze and Noghaideli scored 4% and 3%, respectively. 40% of Georgians believe that Saakashvili would be the best leader during the economic crisis, while Targamadze scored 8%, Alasania 5%, Burjanadze 2% and Noghaideli 1%.

Nearly the same pattern is maintained in the respondents’ answers to questions as different as the political leaders’ ability to restore Georgia’s territorial integrity or tackle the widespread unemployment. The Georgian Church, the army and the police lead the list of institutions that Georgians trust most, with 90%, 84% and 81%, respectively. 36% name unemployment as the country’s number one problem while 27% think that it is territorial integrity and 10% name the state of the economy as Georgia’s most urgent problem.

83% of Georgians name Russia as their nation’s number one security threat and 59% of those polled see the United States as Georgia’s most important partner followed by Ukraine with 29% and the European Union with 24%. When it comes to Georgia’s NATO membership, 50% of Georgians show their wholehearted support and the additional 22% give their partial support, while only 9% categorically oppose NATO membership for Georgia. Although the Georgians’ support for NATO membership is slightly down when compared to the results the IRI published in October 2009, it remains logically compatible with the patterns Georgians display toward the West and Russia.

Given the institutions Georgians trust, threat perceptions they have and the most urgent problems (unemployment and territorial integrity) they think are priorities for their country, it is not surprising at all that the pro-Russian political figures enjoy very little public support since they are not associated with the positive trends and are not seen as capable of solving the negative ones.

Back
Economic Embargo on Georgia: Why Would R..Next
Tulip Revolution Reloaded

On August 4, the Jamestown Foundation held a webinar  on... END_OF_DOCUMENT_TOKEN_TO_BE_REPLACED

On September 11, Jamestown Foundation Senior Fellow Janusz Bugajski was interviewed by the Polish Naval War Academy regarding his book, Failed State: A Guide to Russia’s... END_OF_DOCUMENT_TOKEN_TO_BE_REPLACED