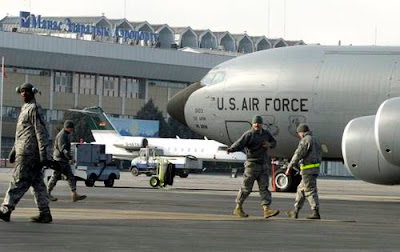 Kyrgyzstan president Roza Otunbayeva has expressed her disappointment with the November 3 U.S. Defense Department (DoD) decision to renew its contract with Mina Corp Ltd., which has supplied jet fuel to the U.S. Transit Center Manas in Bishkek for the past six years. The one-year, $315 million contract will allow Mina to supply 96 million gallons of fuel to Manas. The contract can also be extended for another year.

Otunbayeva is particularly unhappy with the DoD’s decision to renew its collaboration with Mina due to the fact that her government is still investigating the company’s work in Kyrgyzstan. The government has urged the United States to terminate the contract with Mina until the investigation is completed.

According to the president, the Defense Department has turned a blind eye to the fact that revenues from selling fuel to Mina by local companies surpass the state budget. The business is so secretive, she alleges, that it is difficult to trace how these virtual companies serving Mina function. Both DoD and Mina have claimed that they are not aware of any corruption schemes led by Kyrgyz contractors. The U.S. Congress, in the meantime, has called on the DoD to “ensure transparency” in fuel supply contracts.

DoD’s resumed cooperation with Mina comes at the time that Otunbayeva’s administration is pushing for greater transparency throughout the government. Although corruption remains high in Kyrgyzstan, some positive changes are obvious. Otunbayeva has been determined to fight the major corruption sources of the previous regime.

Otunbayeva has announced that a new state agency “Manas” will be formed to take over fuel supplies to the Transit Center. Right now the Kyrgyz government is pushing for the gradual overtake of fuel supplies by local companies, hoping to increase their involvement from 20 percent to 50 percent during 2011.

The few open supporters of the U.S. Transit Center’s presence in Kyrgyzstan see its main benefit in significant financial inflows from rent payments. Although none of the five political parties represented in the parliament have openly challenged the U.S. presence, corruption around fuel supplies might potentially serve as a strong argument against the Transit Center.

Back
Russian State TV Broadcasts a Parody of ..Next
Kazakhstan Lifts Ban on Major Blog Porta..

On August 4, the Jamestown Foundation held a webinar  on... END_OF_DOCUMENT_TOKEN_TO_BE_REPLACED

On September 11, Jamestown Foundation Senior Fellow Janusz Bugajski was interviewed by the Polish Naval War Academy regarding his book, Failed State: A Guide to Russia’s... END_OF_DOCUMENT_TOKEN_TO_BE_REPLACED