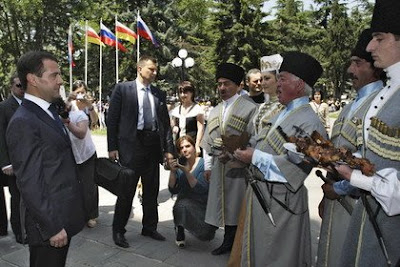 Russian President Dmitry Medvedev’s stealthy visit to Tskhinvali, the capital of Georgia’s breakaway region of South Ossetia, on Monday, July 13, was significant in many ways. Occurring a week after U.S. President Barack Obama’s historic “reset” visit to Moscow, it was firstly intended to demonstrate to Washington the importance Russian leadership (read Putin) attaches to the idea of “spheres of influence” in the post-Soviet space in general and in South Caucasus in particular. Secondly, as Russian investigative journalist Yulia Latynina correctly points out, it was an exercise in public humiliation of President Medvedev, who was dispatched to that forsaken landlocked enclave by Prime Minister Vladimir Putin. After all, what better way to dispel the speculations about who is in charge in the aftermath of the U.S.-Russian summit? Thirdly, undoubtedly it was a petty swipe at U.S. and the West as a whole for the three seemingly unrelated events (in no particular order of importance): the July 20-24 visit by U.S. Vice President Joe Biden to Georgia and Ukraine; the arrival of the U.S.S. Stout in Batumi on July 14 in preparation for the joint U.S.-Georgian naval exercises in maritime security scheduled for July 15; and the signing of the intergovernmental agreement for the construction of the strategically important Nabucco gas pipeline, which took place in Ankara on July 13.

Flown to South Ossetia on a helicopter from the military airport in Mozdok, North Ossetia, Medvedev spent some time touring the newly built 4th Russian military base in Tskhinvali. At the base, which is a part of Russia’s 58th Army, the commander of the North Caucasus Military District Colonel-General Sergei Makarov, who commanded the Russian troops during last year’s war with Georgia, showed Medvedev the tank hangar, barracks and dining area and boasted that, “At present our base is capable of fulfilling all tasks that are assigned to it.” Indeed, the military component was prominent throughout Medvedev’s visit as he was accompanied by the Russian Minister of Defense Anatoly Serdyukov. Mimicking the secrecy that usually shrouds the trips of Western leaders to conflict areas such as Iraq and Afghanistan, President Medvedev’s visit to Tskhinvali was also kept secret until the very last moment. According to Kommersant, the separatist leader Eduard Kokoity was informed about the high guest less than an hour before his arrival.

Although no agreements were signed in the course of this very brief visit, its symbolic importance was manifold. The Russian government defiantly demonstrated to the West and the U.S. that it intends to honor its commitments to Georgia’s secessionist areas. President Medvedev emphasized in Tskhinvali that Russia will continue to fund the reconstruction of the enclave even though he could clearly see that Russian taxpayers’ money has been disappearing into thin air as much of the town still lies in ruins. The level of socio-economic deprivation and impoverishment in South Ossetia was even reflected in Medvedev’s comments, when he could not help but notice that, “They [South Ossetians] live in very poor and difficult conditions, but to be honest, they are very grateful to Russia for the difficult decisions that were made in August 2008.” Thus, utterly dependent on Russia in everything and with the economy at a virtual standstill, South Ossetia has been effectively turned into a military bridgehead whose sole purpose is to intimidate Tbilisi by its sheer proximity.

The Jamestown Foundation is pleased to host the webinar, “The... END_OF_DOCUMENT_TOKEN_TO_BE_REPLACED