On May 18, the authoritative Russian newspaper Kommersant published an unexpected appeal on behalf of ethnic Russians living in Siberia’s Republic of Tuva. Rossiyane, a union of Russian-speaking citizens in the republic, complained to President Vladimir Putin that ethnic Russians in the republic are victims of discrimination. The appeal’s signatories, including Zinaida Dekhtyar, a former deputy in the regional parliament and a school teacher, said that residents of Tuva learn Russian as a foreign language in schools, and the proportion of ethnic Russians in the regional government has dropped “catastrophically.” According to Dekhtyar, a significant portion of the republican population does not speak Russian at all. “Look at our famous wrestlers. They give interviews for the national TV channels in the Tuvan language which are translated then into Russian,” the Russian activist said. Out of Tuva’s 17 district heads, only one is an ethnic Russian, while out of the 37 members of the regional government, only three are ethnic Russians. The habit of speaking Russian is fading away even in government offices, the activists lamented. The organization of ethnic Russians in Tuva was especially discontented with the appointment of “the creator and the activist of the nationalist separatist ‘People’s Front’ [Khostug Tuva], Kaadyr-oola Bicheldei,” as deputy head of the regional government in December 2015. The activists blamed the outflow of ethnic Russians from the region in the 1990s on Bicheldei. The appeal’s signatories asked Putin to intervene and provide equal rights for all residents of Tuva regardless of ethnicity (Kommersant, May 18).

Tuva is a sparsely populated autonomous republic in southern Siberia. The republic, which is about 170,000 square kilometers—about the same as Wisconsin or Florida—borders northwestern Mongolia and has a little more than 300,000 people. Tuva is quite isolated not only from the rest of the world but also from the rest of Russia, with which it does not even have a rail link. Due to its remoteness from the rest of Russia and its proximity to Mongolia, Tuva has retained its nomadic culture like no other territory in the Russian Federation. Much of the Tuvan economy is self-sustainable and does not depend on Russia, so the republic has acted quite independent of Moscow’s policies. Another reason for Tuva’s high level of political autonomy is that it officially became part of the Soviet Union only in 1944 and was influenced by Russia less than other territories that were part of Russia for a longer time. The Russian Empire established a protectorate over Tuva only at the start of the 20th century. Tuvan is a Turkic tongue with significant Mongolian language influences. Russian Defense Minister Sergei Shoigu is perhaps the most famous ethnic Tuvan in Russia today.

Ethnic Russians have become particularly vocal in Russia’s Volga regions—including, among others, Tatarstan and Bashkortostan—demanding language rights they claim were violated by the regional authorities. Tuva stayed out of the spotlight until recently. Ethnic Russians comprise only about 16 percent of the total population of Tuva, and almost all of them live in the capital, Kyzyl. The republic’s ethnic-Russian population peaked at the time of the 1959 census, when they comprised 40 percent of the population. Since then, the ethnic-Russian population in Tuva has consistently declined. In April, local Russian politicians established Rossiyane and started voicing the concerns of the local Russians (Kommersant, May 18).

Tuva’s deputy minister for education and science, Elena Khardikova, dismissed the Russian activists’ criticism. She said that while she valued Zinaida Dekhtyar as a teacher, she could not recall Dekhtyar ever having voiced concerns about ethnic Russians in Tuva. Khardikova also alleged that Rossiyane was not a serious group because it was made up only of a handful of individuals (Gov.tuva.ru, May 15).

However, the resentment of ethnic Russians in Tuva is not limited to Zinaida Dekhtyar and Rossiyane. An author writing under the pseudonym Kondrat Pchyolkin alleged that Tuvans had forced ethnic Russians out of the republic, ruining local industries. The new Tuvan national anthem, which was adopted in 2011, emphasizes “I am a Tuvan,” thus excluding ethnic Russians from the picture. More importantly, the proposed construction of a railway link from mainland Russia to Tuva is reportedly meeting stiff resistance in the republic. Many Tuvans think that Russia acquired Tuva illegally and should let it go (Risk-inform.ru, April 29, 2014).

Tuva has managed to retain a great degree of political autonomy without much fanfare. Even though Russian authorities appear moderately concerned about Tuva’s affairs, they have not launched a serious crackdown to establish greater control over the republic. Despite the ethnic-Russian activists’ complaints, on May 23, Putin signed a decree allowing the republic’s current governor, Sholban Kara-ool, to run for another term in September (Gazeta.ru, May 23). Tuvans have been “represented” in the Russian government by Sergei Shoigu, but when there is no one to represent them in the Russian government at such a high level, separatist tendencies might indeed prevail in the republic. Ironically, the Russian government would have a hard time controlling the territory because its infrastructure is so underdeveloped. 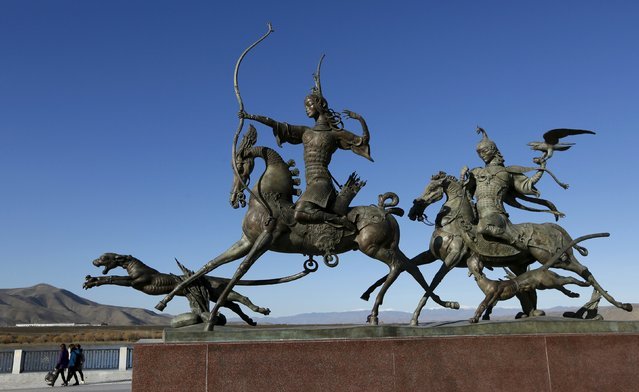 The Jamestown Foundation was proud to host a webinar on... END_OF_DOCUMENT_TOKEN_TO_BE_REPLACED

Jamestown Foundation Analyst Richard Arnold was interviewed by PolitiFact for a story on the Lie of the Year 2022, or Putin’s long list of lies... END_OF_DOCUMENT_TOKEN_TO_BE_REPLACED

While the Arab Middle East is political Islam’s ideological and historical core, South Asia and Southeast Asia, concentrated in the Indonesian archipelago, make up the modern demographic core of the Muslim world. Advocates of political jihadism have been adept at exploiting pre-existing territorial and ethnic grievances, both perceived and... END_OF_DOCUMENT_TOKEN_TO_BE_REPLACED