The Hu Jintao administration has significantly tightened policy over Tibet in an apparent attempt to ensure the proverbial Chinese Communist Party’s “long reign and perennial stability” in the restive region. More hard-line cadres are being appointed to run the Tibet Autonomous Region (TAR). While unprecedented aid has been pledged for the estimated 6.5 million Tibetans living in the TAR as well as the neighboring provinces of Sichuan, Gansu and Qinghai, the bulk of the new infrastructure projects also serve to speed up Han Chinese migration. These multi-pronged measures seem geared toward defusing possible disturbances in the event of the demise of the 75-year-old Dalai Lama. Meanwhile, prospects for the resumption of dialogue between Beijing and the exiled spiritual leader have become more dismal than ever.

The most eye-catching personnel change is the appointment of the hawkish Pema Thinley (aka Padma Choling), 58, as TAR Chairman, or Governor. Pema, a former executive-vice chairman who had also been promoted TAR Vice-Party Secretary, replaced 62-year-old Qiangba Puncog, who has become head of the region’s People’s Congress, or legislature (Ming Pao [Hong Kong], January 16; Tibet Daily, January 6). Given that Qiangba is three years shy of the normal retirement age for provincial chiefs, it is likely that the relatively moderate—but ineffective—Qiangba was penalized for failing to deal harshly with the spate of anti-Beijing protests that erupted in the spring of 2008 and 2009. Pema, by contrast, is one of only a few senior ethnic-Tibetan cadres with solid military experience. He served in the Qinghai and Tibet military districts from 1969 to 1986. When Hu was TAR party boss, Pema was secretary of the party cell of the regional government’s General Office as well as deputy head of the Nanshan District. Moreover, Pema, who has since the early 2000s been responsible for law and order in the TAR, has the reputation of a hard-line enforcer of Beijing’s ironclad strategy against the so-called “three evil forces” of separtism, terrorism and religious extremism (Novosti News Agency [Moscow] January 12; Xinhua News Agency, January 12).

The party-and-state apparatus’ tough tactics toward ethnic minorities were endorsed at a January 8 Politburo meeting devoted exclusively to Tibetan issues. In the meeting, President Hu, who was party secretary of Tibet from 1988 to 1992, heralded two goals for the TAR in the coming decade: “seeking a breakthrough-style [economic] development” and “maintaining long-term stability.” In an apparent effort to win the hearts and minds of Tibetans, Hu promised that the central government would help Tibet in four ways: boosting investment, transferring technology, and sending in more qualified officials as well as “experts and talents.” The region’s GDP is set to grow by 12 percent this year, while fixed-assets investments are expected to grow by a whopping 18 percent. Under President Hu’s dictum of “going down the road of development with Chinese characteristics and Tibetan flavor” (zhongguo tese, xizang tedian), additional input has been focused on areas including infrastructure, tourism, mining and manufacturing. Little wonder that the share prices of a dozen-odd Tibet-related construction, transport and mining companies listed on the Shanghai Stock Market jumped sharply at the beginning of the year (Tibet Daily, January 9; Xinhua News Agency, January 9; People’s Daily, January 10).

Foremost among infrastructure schemes mooted for the 12th Five-Year Plan period of 2011 to 2015 is what the official Chinese press bills “the world’s highest airport.” Construction of the 1.8 billion yuan ($263.5 million) airport in Tibet’s Nagqu Prefecture, which has an elevation of 4,436 meters (14,639 feet), will begin late this year. According to local media, the Nagqu Airport would, together with ultramodern facilities such as the Qinghai-Tibet Railway, “perfect a three-dimensional transport network that will envelop all Tibet” (AFP, January 12; Mil.news.sohu.com [Beijing], January 16). Exiled Tibetans and Western Tibet experts, however, have reacted negatively to Beijing’s supposed new deal for the impoverished region. The Dalai Lama’s representatives have complained that Chinese investment in the TAR mainly benefits businessmen and skilled workers from other provinces—and that modernized transport systems in particular will facilitate Sinicization through the migration of Han Chinese into the region. Commenting on the Hu leadership’s new policy on Tibet, Columbia University Tibetologist Robert Barnett noted that “China now seems locked into conflict with Tibetans.” “Either Beijing’s leaders lack the political capital to admit that existing policies might have failed or…they believe that Tibetans will be won over by the current mix of repression and enforced, culturally corrosive modernization that stimulates migration,” he said [1].

President Hu and his advisers have not mentioned what kind of “experts” will be dispatched to Tibet. In the wake of ethnic violence in both Tibet and Xinjiang last year, however, more soldiers and officers of the paramilitary People’s Armed Police (PAP) have been stationed in the two regions (See “The Xinjiang Crisis: A Test for Beijing’s Carrot-and-Stick Strategy, China Brief, July 23, 2009). It is significant that Commander-in-Chief Hu last month promoted a former head of the Tibet People’s Armed Police (PAP) Garrison, Lieutenant-General General Wang Jianping, as the commander of the national PAP, whose strength is estimated at close to 1 million. Particularly compared to so-called splittists in Xinjiang, “anti-Beijing” elements in Tibet are pacifist and non-violent in nature. Yet, Chinese authorities anticipate redoubled resistance as they crack the whip on monks and other potential troublemakers in the TAR as well as Tibetan districts in neighboring provinces. Beijing is stepping up a controversial drive to register the “qualifications” and other background materials of all living Buddhas, monks and nuns in the region. In the past few months, several monks and dissidents were given severe prison terms. For instance, liberal film-maker Dhondup Wangchen was sentenced last month to six years in jail for producing a documentary attacking Beijing’s Tibet-related cultural policies (Reuters, January 7, January 11; Asianews.it [Rome], January 4).

Moreover, Beijing seems to have closed the door to on-again, off-again negotiations with the emissaries of the Dalai Lama. The CCP’s relations with the Nobel Peace Prize laureate have soured particularly in the wake of the latter’s visit late last year to Arunachal Pradesh, an Indian province that Beijing considers to be Chinese territory. Chinese diplomats are also pulling out all the stops to prevent politicians of Western countries from meeting the head of the Tibetan movement-in-exile. Diplomatic analysts say the Hu administration is not keen on reopening a dialogue because Beijing thinks that the momentum is going China’s way. After the Dalai Lama’s death, the Tibetan movement will be devoid of a globally recognized leader and may well be splintered along factional lines (Reuters, November 8, 2009; Ming Pao, November 9, 2009; Global Times [Beijing] December 8, 2009). Columbia University’s Barnett thinks that while Beijing may not have ruled out the possibility of re-opening talks, possibilities of a compromise are slim. “The Chinese side might agree at the last minute to a token meeting with the Dalai Lama to avoid the ignominy of forcing him to die in exile,” said Barnett. “But until they see a link between policy failure and protest, they seem unlikely to offer the Tibetans anything significant.
At the same time, President Hu, who is the Politburo Standing Committee member in charge of ethnic-minority affairs, has beefed up the state security net in the Xinjiang Autonomous Region (XAR). The regional government is due to spend 2.89 billion yuan ($423.1 million) on maintaining law and order this year. This is 87.9 percent more than the 2009 figure. XAR Chairman Nur Bekri, a member of Hu’s Communist Youth League Faction (CYL), said last week that “strengthening social security and striking hard with an iron fist against the ‘three forces’ of terrorism, separatism and extremism will remain top priorities for Xinjiang” (China News Service, January 8; China Daily, January 13). The CCP leadership’s hardened stance on the two autonomous regions has made it even more unlikely that the ultra-conservative Party Secretaries of TAR and XAR, respectively Zhang Qingli and Wang Lequn, will be replaced any time soon. This is despite reports in the Hong Kong-media late last year that the 65-year-old Wang, who was first stationed in Xinjiang in the early 1990s, would be transferred to a less sensitive post soon (Ming Pao, December 14, 2009; News.newstarnet.com [Beijing], December 15, 2009).
One of the most detrimental results of the conservative turn in Beijing’s policy toward Tibet and Xinjiang is that moderates on both sides have been cowed into silence. For example, before the July 5 riots in Urumqi last year, quite a number of Xinjiang and Han Chinese intellectuals had run websites advocating reconciliation across racial lines. At least unofficially, liberal Chinese cadres have also advocated a return to the flexible and tolerant ethnic policies associated with illustrious figures such as former Party General Secretary Hu Yaobang and former Vice-Premier Xi Zhongxun, the late father of Vice-President Xi Jinping (AFP, July 9, 2009; The Times [London] August 7, 2009).

In the wake of the crackdown on free-thinking websites and liberal NGOs, however, voices of reason and moderation have been marginalized. Moreover, nationalism, including growing intolerance toward the perceived alien cultures of Tibetans and Uyghurs—and attacks on the West for abetting pro-independence movements in China—seems to be on the rise among young Han Chinese. The latter’s fulminations against allegedly ungrateful and unpatriotic Tibetans and Uyghurs can often be found in the chatrooms of popular websites. Given the news blackout on Tibet and Xinjiang, it seems that the Hu Politburo’s harsh policies have succeeded at least in the near term in quashing all manifestations of defiance. Over the long haul, however, heavy-handed suppression as well as Sinicization is unlikely to foster the kind of understanding and comradeship among different nationalities on which lasting stability and prosperity are predicated. 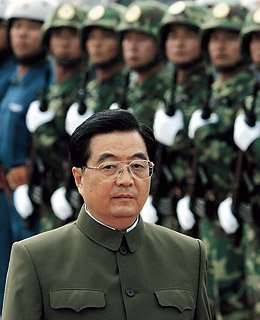 Back
China’s Inroads into North Africa: An ..Next
The PLA’s Multiple Military Tasks: Pri..

The Jamestown Foundation was proud to host a webinar on... END_OF_DOCUMENT_TOKEN_TO_BE_REPLACED

Jamestown Foundation Analyst Richard Arnold was interviewed by PolitiFact for a story on the Lie of the Year 2022, or Putin’s long list of lies... END_OF_DOCUMENT_TOKEN_TO_BE_REPLACED