On October 9, the well-known Russian-Abkhaz journalist Anton Krivenyuk published an article stating the Russian government may be interested in building a highway connecting Abkhazia to the North Caucasus. Krivenyuk hailed the idea, saying it would potentially help Abkhazia overcome its isolation and integrate itself with the Russian North Caucasus, while also helping the North Caucasus to obtain easy access to the Black Sea. He said the road would restore the fraternal relations between the Abkhaz and the Circassians that were damaged by the clever policies of the Georgian leadership that split the Abkhaz and the Circassian nations. The journalist also pointed out that the plans to build this road were related to the recent change of government in Sukhumi, since the former president of Abkhazia, Alexander Ankvab, did not support closer ties with the Circassians. In contrast to his predecessor, the new president of the breakaway Georgian region, Raul Khadzhimba, reportedly regards the Circassians much more favorably. Indeed, Karachaevo-Cherkessia recently announced it would hold a tender to build the road, which would pass through the republic right up to the border with Abkhazia and make Karachaevo-Cherkessia the region connecting Abkhazia to the North Caucasus. The Russian government reportedly plans to go ahead with building the road without even waiting for the Abkhazian government’s approval (regnum.ru, October 9).

After the Russian conquest of the Caucasus in the 19th century, the ancient route from Karachaevo-Cherkessia to Abkhazia was upgraded to the Empire’s standards and named the Military-Sukhumi Road (Voenno-Sukhumskaya Doroga). It was operational until the end of the Second World War, when it was shut down for unclear reasons—possibly to punish ethnic Karachays for their collaboration with the German occupation forces, prevent the Circassians from having direct access to the South Caucasus, and to disrupt their connection with the Abkhaz, who are their ethnic cousins.

Soon after the Russian-Georgian war of 2008, talk intensified about the possible construction of a road from the North Caucasus to Abkhazia. One reason for the enthusiasm for this idea was that the Kodori Gorge, which had been under the control of government in Tbilisi, was captured by the Russian forces in the 2008 war and returned to Abkhazian government control. Part of the historical Military-Sukhumi Road passes through the Kodori Gorge. The then presidents of Abkhazia, Sergei Bagapsh, and Karachaevo-Cherkessia, Boris Ebzeyev, discussed the project at a meeting in September 2009. People in Abkhazia, however, were quite divided over the issue. One Abkhazian politician, Beslan Butba, told the Regnum news agency at the time: “It is too early for us to start building such a road to the North Caucasus. We are a weak state; we will not be able to use this road. I think construction of this road is premature. When we are a strong state with well-functioning law enforcement agencies, we will think about this road” (regnum.ru, September 28, 2009).

Abkhazia remains a fragile territory in more than one sense. In particular, even after the ethnic Abkhaz expelled the Georgian ethnic majority from the republic in the war of 1992–1993, by most optimistic estimates they comprise only 50 percent of Abkhazia’s total population. If the road to the North Caucasus is open and the North Caucasians have the opportunity to travel to Abkhazia freely, then the proportion of ethnic Abkhaz could easily drop even further. The recently proposed controversial agreement for “alliance and integration” between Russia and Abkhazia also does not add much trust between the two sides (ekhokavkaza.com, October 16).

The Abkhazian side largely views the proposed agreement as a way of ending the republic’s formal independence and ensure its absorption into the Russian Federation (asarkia.info, October 17). The pressing question now is whether the Abkhazian government will reject the agreement or simply seek to raise the price of losing its autonomy. Russian-Abkhaz journalist Anton Krivenyuk argues that the agreement is a way to ensure that Abkhazia will not seek an Association Agreement with the European Union in the future (kavpolit.com, October 15).

It appears that the Russian government plans to implement the annexation of Abkhazia, using similar tactics of denial and covert campaigning as in Crimea and eastern Ukraine. While Russia has not formally proposed annexing Abkhazia, the practical moves that the republic is expected to make, such as changing all its laws according to the Russian example, indicate the de-facto annexation of the Russian satellite in the South Caucasus. The building of a road from the North Caucasus to Abkhazia may be bait to smooth the way for Abkhazia’s annexation—that is, the plans to build the road were most likely announced in order to obtain support from the Circassians and signal to the Abkhaz that by signing the agreement with Moscow they would gain a connection to their ethnic kin in the North Caucasus. Once the absorption of Abkhazia is finalized, the road construction plans will most likely be dropped. Raul Khadzhimba’s recent visit to Nalchik may have been specifically designed to pave the way for a public campaign that emphasizes the brotherhood of the Circassians and the Abkhaz (abh-n.ru, October 9).

Moscow, however, is unlikely to be interested in providing the Circassians with additional allies. Even within the Russian Federation, Circassians are divided among several republics and territories, so why would Russia want to attach the Circassians to a foreign land comprised of a group that is their ethnic kin? The talk about building the road must have been designed to convince the Abkhaz of Russia’s good intentions, but it will be easy to drop once Abkhazia signs an agreement of accession to the Russian Federation. 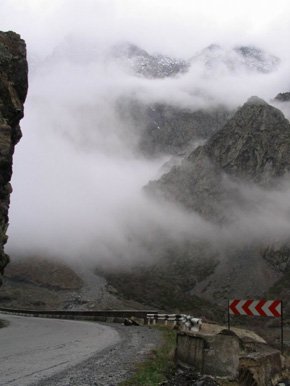 Back
Upcoming Parliamentary Elections in Ukra..Next
Is Moscow’s Proposal to Link Abkhazia ..

On August 4, the Jamestown Foundation held a webinar  on... END_OF_DOCUMENT_TOKEN_TO_BE_REPLACED

Jamestown Senior Fellow Margarita Assenova was featured in an event with the New Lines Institute for Strategy and Policy on Capitol Hill. The event was... END_OF_DOCUMENT_TOKEN_TO_BE_REPLACED

The July 2015 issue of Militant Leadership Monitor covers militants from Libya to Pakistan. Nicholas Heras begins with a brief on Muhanna Jaffala, an Aleppan student turned rebel leader who was just severely injured in an assassination attempt. Heras follows with another on Faraj al-Barassi, the Libyan National Army’s colonel who... END_OF_DOCUMENT_TOKEN_TO_BE_REPLACED