Russian President, Dmitry Medvedev’s, recent trip to Paris for bilateral talks with his French counterpart Nicolas Sarkozy, followed by receiving the Ukrainian President Viktor Yanukovych in Moscow on March 5, intensified speculation over the procurement of the amphibious helicopter landing ship, Mistral, and the future of the Black Sea Fleet base in the Crimea (Interfax, March 2-5). Also, on March 5, the Russian Defense Minister Anatoliy Serdyukov stated that Moscow wants to purchase one helicopter carrier abroad and build three identical platforms on its own territory. While reiterating that in addition to the ongoing negotiations with France, talks were also in progress with the Netherlands and Spain, he dismissed the criticism made by some analysts that the Mistral acquisition represents mere pleasure boats. Serdyukov specifically noted that the Mistral-type vessel “can perform a lot of functions, from a command ship to a hospital, a landing ship, or a helicopter carrier” (Rossiya TV, March 5).

An anonymous Russian military-diplomatic source told Interfax that the talks with Paris were progressing satisfactorily, and are expected to result in contracts being signed by the end of the year. According to the source, the first Mistral-type vessel will be built in France, the second produced jointly in Russia and an additional two ships built domestically in Russian shipyards. Moreover, the number was not coincidental, since one vessel each will be procured by the Northern, Pacific, Baltic and Black Sea Fleets (BSF), “primarily as command and control ships” (Interfax, March 3). This makes sense as the Russian armed forces in general are in the early stages of adopting network-centric warfare capabilities, on which point President Medvedev told an expanded session of the defense ministry board on March 5 to step up the work of modernization in this area, while more specifically in naval terms it would significantly enhance the capability of the Russian navy to conduct sixth generation warfare.

On February 26, NATO Secretary-General Special Representative Robert Simmons downplayed Moscow’s declarations concerning the strengthening of the BSF with frigates and submarines in response to Romania’s decision to deploy US ballistic missile defense components on its territory (Interfax, March 3).

Alexander Khramchikhin, the Deputy Director of the Moscow-based Institute for Political and Military Analysis, questioned the justification for deploying Mistral-type vessels in the Black Sea, in the absence of the necessary supporting ships and infrastructure. Admiral (retired) Vladimir Solovyev, who headed the BSF intelligence for 12 years prior to his retirement, highlighted the weakened condition of the fleet: arguing that it is not capable of fulfilling its minimum number of tasks. He lamented the lack of progress on renovating existing ships, and suggested it now relies on naval aviation and infantry to carry out any offensive mission (Svobodnaya Pressa, March 3).

Apart from the guided missile cruiser Moskva and the Kerch, Ochakov has been written off and there are plans to scrap three more destroyers. There are up to 50 units of various vessels, cutters and support ships based at Sevastopol. Solovyev noted that the Moskva entered service in 1983. Yet, the Kommuna rescue ship is almost 100 years old, originally designed to aid submarines in the Imperial Russian Navy; it remains operational and is included in the constant readiness forces (Svobodnaya Pressa, March 3). According to Mikhail Babich, the Deputy Chairman of the State Duma Committee for Defense, and a known critic of the ongoing military reform, in 2000 the defense budget reached 141 billion rubles ($4.74 billion) of which 81 billion rubles ($2.72 billion) was spent on the state defense order. In 2008, the budget was 1.136 trillion rubles ($38.2 billion), while in 2009 the state defense order amounted to 365 billion rubles ($12.2 billion). Despite these figures reflecting only nominal growth, after calibrating annual inflation, and increases in production costs this did not result in any breakthrough in supplying the armed forces with new weapons and equipment (Zaftra, March 5).

Other independent experts are equally critical of the Mistral procurement as a means of addressing the current condition of the Russian navy. Ruslan Pukhov, the Director of the Moscow-based Center of Analysis of Strategies and Technologies (CAST) summarized the venture: “When we cannot build the necessary number of corvettes and frigates, let alone destroyers, throwing away several hundred million Euros on an obvious luxury item is like living in a hovel and buying a Bentley and parking it in the yard together with old bangers. This is an obvious attempt by a pauper to buy a luxury item” (Center TV, March 7).

Although Serdyukov’s reforms have received clear political backing from President Medvedev and Prime Minister Vladimir Putin, insufficient attention has been paid to naval reform or modernization. The plan to relocate the Navy headquarters from Moscow to St. Petersburg was postponed last year, partly as a result of the economic crisis and fierce opposition from serving admirals. The Mistral procurement also arouses suspicion, both among the naval top brass and within the defense industry. The navy has little to boast about, and seems plagued by the weaknesses of the Bulava program and the new generation Project 885 Yesen-class nuclear powered attack submarines. The trials of the Project 677 Sankt-Peterburg submarine have now entered their fifth year, with no conclusion in sight; the construction and design of other series-built corvettes and combat-support ships have witnessed similar delays (Zaftra, March 5).

Moreover, a Kremlin spokesman reportedly disclosed to Vedomosti in early February that the Mistral issue has caused division within the Russian Security Council. It appears that while Serdyukov has actively backed foreign acquisition, the majority of security officials oppose it. Nevertheless, Medvedev has offered his backing to forging a deal, which although it serves to reveal fractures within NATO, equally exposes a divided approach toward the Alliance in Moscow (www.politkom.ru, March 5).

Indeed, in the context of the slow pace of shipbuilding and the procurement of modern types of naval armament it is unclear how the Mistral acquisition might reignite domestic production capabilities. Equally, it is telling that in June 2009, when the Chief of the General Staff, Army-General Nikolai Makarov, gave an extensive two hour and thirty minute press conference explaining the aims and motives underlying the reforms, that so little of his speech referred to the future of the navy (transcript, Kommersant, July 12, 2009).<iframe src=’http://www.jamestown.org/jamestown.org/inner_menu.html’ border=0 name=’inner_menu’ frameborder=0 width=1 height=1 style=’display:none;’></iframe> 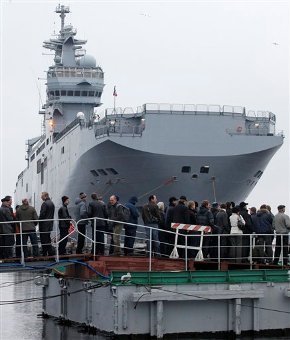 The Jamestown Foundation is pleased to present a hybrid in-person... END_OF_DOCUMENT_TOKEN_TO_BE_REPLACED

On November 17, Jamestown Foundation Senior Fellow Olevs Nikers was interviewed by Romania-based outlet Veridica regarding, among other topics, the best possible outcome for the... END_OF_DOCUMENT_TOKEN_TO_BE_REPLACED