The People’s Liberation Army (PLA) is developing a force that resembles the efforts of the Soviet Army in East Germany in 1986, which was creating an Operational ‘Shock Division’ of three regiments with each regiment containing two tank and two mechanized infantry battalions.  Armored divisions being too unwieldy in complex terrains and an armored battle group (battalion sized) being easier to control and execute its mission [1]. Following on the PLA’s experience with earlier corps/brigade structures, it can currently deploy at least three mechanized infantry battle groups and three armored battle groups under the new brigade structure.  These forces are designed to be deployed on the periphery of China’s borders and provide a means of penetrating an adversary’s border defenses if required.  Furthermore, the PLA has developed and tested one composite cavalry brigade for use in complex terrain and to provide reconnaissance, air mobile support and flank protection for a deployed force [2].

Utilizing the Soviet military doctrine of “deep operations”, the PLA can now employ an air mechanized and/or fast wheeled force as a ‘lance’ followed up by the tank heavy mobile force to exploit the breach in an enemy’s defenses that is followed by a heavy mechanized holding force [3].

Each armored brigade has three armored battalions for a total of 99 main battle tanks, one mechanized infantry battalion, one artillery battalion with 18 self-propelled guns and one air defense battalion of 18 AAA guns.  Each armored battalion has three armored companies, each company includes three platoons, and each platoon is composed of 3 battle tanks. Altogether a company will be composed of 11 main battle tanks; three in each platoon and two headquarters vehicles.  A complete brigade contains 2,200 soldiers (Xinhua News Agency, October 28).

In the tracked units, the Type 03 amphibious reconnaissance vehicle will replace the Type 62 light tank and the Type 63 amphibious tank as the main vehicle utilized in the provision of medium reconnaissance.  Its wheeled units, medium reconnaissance will be provided by the Type 02 100mm assault guns.   They will operate ahead of the main forces and provide a flanking screen of up to four kilometers on the flanks.  Too large for scouting and close-in reconnaissance, this role can be performed by the ZBD05 airborne vehicle, which carries a 30mm automatic gun for self-protection and for destroying light armor, and can also carry a scout section under armor.  The medium/close reconnaissance mix could have been trialed in the Peace Mission-2007, and would explain the large number of Type 02 100mm assault guns compared to the number of armored personnel carriers and infantry fighting vehicles.

Following Peace Mission 2007, the PLA had two major exercises in 2008 that tested the newly restructured brigades in battle group tactics. These exercises were code named "Sharpening-2008" and "Vanguard-2008", and they were also the first major PLA exercises to test joint operations at the tactical level.

Sharpening-2008 was conducted by the Jinan Military Area Command at the Zhurihe Training Base deep in the Inner Mongolia grasslands (PLA Daily, September 28).  The deployment phase started on August 26, 2008 finishing with the confrontation exercise, "Warrior-2008," on September 25. The exercise saw a light (wheeled) mechanized infantry brigade forming battle groups to defend against an armored (tank) regiment (PLA Daily, September 19).  It exercised joint operations from the strategic down to the tactical levels.  The light mechanized infantry brigade was the first brigade to incorporate the new four armored fighting vehicles per platoon, and it was defending against an armored regiment that has been ‘a forerunner of informationization drive of the PLA’.   Both the light infantry brigade and the armored regiment utilize the new Command, Control, Communications, Computers and Intelligence (C4I) structure with armored command vehicles down to the company level (PLA Daily, August 27).

Tactical joint operations were a first for the PLA as joint training had previously only been conducted at the strategic level.  Battle groups comprised infantry, artillery, anti-aircraft artillery, engineering and anti-chemical sub-units (PLA Daily, September 16).  Another first was the incorporation of a J2 at the brigade level to coordinate the intelligence gathered from various sub-units. This intelligence had previously not been shared and the J2 is now also responsible for the rapid exploitation and dissemination of this newly acquired information (PLA Daily, September 16).

Vanguard-2008 was conducted from October 17 to October 28 in Henan Province in Central China. As a firepower exercise, it focused on battlefield joint operations and C4I  tilizing the new Outline of Military Training and Evaluation publication (PLA Daily, October 22).  The PLA deployed armor and mechanized heavy battle groups utilizing the Pei Shu doctrine.  Equipped with Type 96 main battle tanks, the brigade was supported by its heavy mechanized infantry in their Type 86 infantry fighting vehicles, and PZL89 122mm self-propelled guns providing direct support (PLA Daily, October 17).   Mi-17 transport, Z-9W helicopters and reconnaissance vehicles were also included to trial the battle group and brigade joint operations centers in coordinated fire missions (Xinhua News Agency, October 28).  Among the observers for the final day of the exercise, which consisted of a firepower demonstration, were 179 foreign military students, representing 67 different countries. Most of the students were from the University of National Defense and the Nanjing Army Command College (PLA Daily, October 29).  This group was the largest contingent of foreign military students to ever observe a PLA military exercise.

A recent amphibious joint fire support exercise revealed how the joint operations fire support system was developed (PLA Daily, November 3).  The PLA mechanized amphibious exercise developed a joint operations fire support command and control net integrating field, tactical and satellite communication networks. To test the system, the PLA ran an exercise that involved removing obstacles in the path of an amphibious landing (an amphibious assault is generally accepted as the most complicated of all military operations).  A Nanjing based mechanized division was tasked with developing a near (wc) real time fire support and control system from the platoon through company, battalion, battle group and corps levels, while incorporating reconnaissance, armored, artillery, air defense and army aviation units.   With the assistance of military-defense, the Nanjing division was able to develop an  army-wide service system and then transform this system into a joint structure that enable real time naval gunfire support during strike missions by the People’s Liberation Army-Air Force (PLAAF) aircraft.
The first stage of the structure was just within the battle group, it was then expanded to the various corps level operation centers in the field regional communication network and to the command and control network at the theater level.  Voice and data were sent along this system by the three services under the operational control of the army-led joint operations cell tasked with breaching the obstacles prior to an amphibious landing.  This cell called in 13 strike missions involving naval gunfire support, PLAAF strike aircraft and a PLA engineer unit using some type of rocket minefield clearing counter obstacle vehicles, most likely Type 84 rocket minefield breaching system towed by GJT11A armored bulldozers [5].
Theater and Battlefield Command System
The PLA is in the final stages of the development of informationization and mechanization of its weaponry and equipment, a process that has been the cornerstone of PLA modernization since 2000. It is trialing a prototype battlefield awareness system that, if successful, will enable commanders to execute battle operations, including fire missions, with near real time control (PLA Daily, November 4).
At the tactical level, the mature system would be deployed on armored command vehicles, major warships and aircraft, thus utilizing data links to distribute information throughout the system.   Air defense and airspace control will be part of the system to ensure that army aviation and PLAAF aircraft are not engaged by PLA air defense units.  The People’s Liberation Army Navy’s (PLAN) new 14,000 ton Landing Platform Dock (LPD) amphibious ships will be equipped with the full system to enable them to serve as flagships during amphibious operations such as disaster relief [6].
Essential to the new battle groups are long range reconnaissance and strike assets including aerial fire support.  The new WZ-10 attack helicopter can be expected to act as an armed reconnaissance helicopter, utilizing data links to provide real time imagery for the commander through its advanced all-weather avionics and targeting systems, as well as providing close air support to PLA forces with anti-tank guided missiles, rockets and its 30mm automatic cannon [7].  The PLA has invested heavily in unmanned aerial vehicles (UAVs).  The W-50 UAV has a reported ability to loiter over four hours (depending on the payload) and an operational range of over 100 kilometers [8].  Their Z-3 remotely piloted helicopter, which utilizes a GPS navigation system, has a takeoff weight of 130 kilograms including a 30 kilogram payload [9].   In the recent Sichuan Earthquake, at least one Chinese-developed small UAV was deployed to survey the damage [10].  Only 2.1 meters long with a wingspan of 2.6 meters, it weighs 20 kilograms and is of pusher configuration with twin booms connecting a ‘V’ shaped rear fin.  It can travel at 110 kilometers per hour, reach an altitude of 3,500m, and has GPS assisted guidance.

The two large scale military exercises Sharpening and Vanguard-2008 revealed that the PLA is in now equipping its forces with weapons systems that are equivalent to Western standard and with command and control systems that act as force multipliers, thus enabling PLA commanders to have information superiority over its regional land neighbors.  This capability will enable the PLA to disrupt an adversary’s decision command cycle, thereby allowing the Chinese to dictate the battle on their own terms.  When a target is located, modular arms battle groups will be able to maneuver into the best position to engage the enemy or engage them with long range strike assets.  Similarly, a joint operations cell could utilize UAVs to independently locate the enemy while knowing the location of all the friendly units, thereby avoiding friendly casualties.

The People’s Liberation Army is consolidating the gains made by its modernization drive toward mechanization and Informationization.   The PLA has now demonstrated that it has versatile forces able to fight in any climate, weather or time of day.  These forces, currently small but expanding, have technological parity with any forces in Asia or Eurasia.  Within the next few years the PLA will have two mechanized and networked army corps able to give Chinese Defense planners military options they did not previously have.  The three exercises examined above show that the PLA is now a modernized military power–no longer the foot based infantry force of days past.  In recent years China has become increasingly dependent on Central Asia as its main energy supplier.  As such, instability beyond Chinese borders will have a more direct impact on Chinese security. These newly formed forces provide the PRC with military options for rapidly deploying and executing a battle to defend its growing sphere of interests. 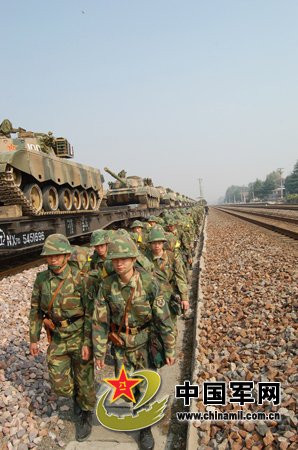 Back
Arms Sales and the Future of U.S.-Taiwan..Next
Transformations in China’s Soft Power ..

The Jamestown Foundation is pleased to host the webinar, “The... END_OF_DOCUMENT_TOKEN_TO_BE_REPLACED

The September 2018 issue of Militant Leadership Monitor features a brief on the leaders of a Mozambican militant leaders recently revealed by local police; as wells as a synopsis of the multiple Libyan militant leaders responsible for the recent violence in Tripoli; a profile of Shaikh Aslam Farooqi, the... END_OF_DOCUMENT_TOKEN_TO_BE_REPLACED