Last Friday, June 9, the Russian State Duma approved legislation that would eliminate the voting option “against all” in the ballots provided for elections at all levels, from local to presidential. According to Boris Gryzlov, the chairman of the Duma, this step is aimed at “increasing the political responsibility of citizens.” In reality, it indicates that political rights in Russia have been gradually reduced to a level not much different from the Soviet era (Newsru.com, June 9).

The Russian political arena is not full of institutions and procedures that appear perfectly democratic and functionally meaningful but are in fact empty shells. The phantom candidate “against all” was, however, quite real and remarkably popular. This option was first introduced by Boris Yeltsin’s presidential decree at the bitterly contested elections to the first State Duma in 1993 as an option for the voters to express a more profound dissatisfaction with the political system than just supporting opposition candidates (Polit.ru, June 9). At that time, Yeltsin sought primarily to deny the Communists votes from a significant sector of politically active and angry “protest” electorate. With time, however, it has become more of a challenge for the parties that claim to be an opposition but are in fact integral parts of the centrally controlled political machinery, like Vladimir Zhirinovsky’s deliberately misnamed Liberal-Democratic Party, which wholeheartedly supported the eli mination of this option. Ironically, it was the Communists who argued against this “discrediting of the electoral process,” so the vote in the Duma had an unusually high negative at 85 “No” and 352 “Yes” (Lenta.ru, June 9).

The move was formally initiated by a group of legislators from Tver oblast, but there are few doubts that the Kremlin orchestrated the move, as it is clearly obsessed with keeping every political initiative under control. The disciplined pro-Putin United Russia group is expected to dominate every political institution with only pro-forma opposition (Nezavisimaya gazeta, June 9). The political “technologies” that secure this domination are constantly upgraded and fine-tuned, but the perfect model of enthusiastic public support was slightly distorted by the existence of the “reject” option.

According to opinion polls, as many as 59% of respondents were in favor of having the possibility to vote “against all,” and a poll conducted by Ekho Moskvy radio as the parliament considered the legislation showed a 95% preference for keeping that option (Polit.ru, November 24, 2005; Ekho Moskvy, June 9). It was, in fact, a strong vote-getter in several regional elections where the authorities had managed to disqualify opposition hopefuls. For example, in the Kaliningrad oblast race last March, “against all” captured 16% of the vote (Lenta.ru, March 13).

As Vladimir Ryzhkov, one of the few independent parliamentarians, pointed out, in an election where meaningful and, preferably, multiple choices are present, such an option might indeed be redundant (Gazeta.ru, June 9). The real situation in Russia is, however, increasingly far from this ideal case, so the argument that there is no “against all” box to tick in such countries as Austria, Bulgaria, Brazil, Great Britain, Germany, or Italy is not that convincing. Such comparisons only illustrate how farcical Russian political institutions have become with the progressive curtailing of their functions. In one anecdotal example of such pretensions, regional representatives in the upper chamber of parliament, the Federation Council, call themselves “senators,” which U.S. senators sometimes find rather amusing (Ezhednevny zhurnal, June 9).

Carefully maintaining the quasi-democratic faÃ§ade over a system of power that is alien to democracy, the Kremlin ignores criticism from international organizations and takes offence at warnings from key Western partners that it still has to make a choice. Speaking last week at the World Newspaper Congress in Moscow, Putin expounded on the flourishing of free media in Russia, paying no attention whatsoever to the criticism of Gavin O’Reilly, president of the World Association of Newspapers (Kommersant, June 5; Lenta.ru, June 6). The Russian leader also made it clear that he would not encourage any discussion on the status of democracy in Russia at the G-8 summit next month. Meeting with the heads of the information agencies of the member-states of this exclusive club last week, Putin reproached the “Western friends” for their embrace of the “orange events” in Ukraine and explained in no uncertain terms that they would have to pay big money if they hope to continue supporting these developments (Kommersant, June 5).

One of the Communist MPs argued that eliminating the “against all” option would deny the authorities an opportunity to see society’s reaction to their manipulation of the electoral system (Gazeta.ru, June 9). That is, however, exactly what the Kremlin does not want to see. In a system of power based on imitating stability and substituting political competition with PR campaigns, it is entirely possible to pretend that what cannot be seen does not exist. The sycophants inhabiting Putin’s hermetically closed court have no interest in any feedback from society, their only concern is about how little of the enormous inflow of “petro-rubles” should be distributed among the electorate to keep it reasonably content and passive.

Businessman Mikhail Khodorkovsky, who was sentenced to nine years of hard labor exactly a year ago, has described his Siberian prison camp to his wife as an “anti-world” (www.khodorkovsky.ru, June 6). Putin’s Kremlin has also become an “anti-world” of a very different kind and certainly far more comfortable but profoundly alienated from the real life of the country and basically incompatible with the needs of its development. Voter passivity could help Putin pull off his project for preserving the system of power beyond 2008, but the dismantling of democratic structures renders it fundamentally unstable, so this “anti-world” could collapse so fast that the Putin-ites need to keep their suitcases ready. 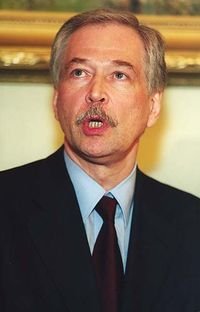 On August 4, the Jamestown Foundation held a webinar  on... END_OF_DOCUMENT_TOKEN_TO_BE_REPLACED

Jamestown Senior Fellow Margarita Assenova was featured in an event with the New Lines Institute for Strategy and Policy on Capitol Hill. The event was... END_OF_DOCUMENT_TOKEN_TO_BE_REPLACED

The horrible tragedy in Boston on April 15 has refocused Western attention on Russia’s troubled North Caucasus, which has already experienced more than a decade of turmoil and upheaval. Many perspectives exist in scrutinizing the deadly events surrounding the Boston Marathon terrorist attacks. But nearly all the dimensions of... END_OF_DOCUMENT_TOKEN_TO_BE_REPLACED