The acting head of the new directorate, Colonel Aleksey Kuznetsov (the former defense ministry’s press secretary) said that it will consist of three subdivisions. One will work with Russian and foreign media, while another will monitor and assess everything reported or filmed about the armed forces. Finally, a center will be formed providing information to services and branches including the rear services. Irina Kovalchuk (Kuznetsov’s former deputy), was appointed as the press secretary of the Defense Minister Anatoliy Serdyukov (Interfax, September 30).

The scale and potential significance of the reform is unprecedented. These posts are no longer reserved exclusively for officers, but open to civilians. Indeed, the eight senior posts in the new directorate are “starred,” which means that they can be filled by either officers or civilian specialists, while more than twenty posts with the status of civil servant are allocated for civilian cadres. New publications will appear within motorized rifle and tank brigades. Additional military newspapers will be launched and others will be based upon the former “divisional” newspapers. The defense ministry will pay for the recruitment of civilian journalists to work for these publications –a pattern which will be replicated within military district and fleet newspapers. In the official defense ministry publication –Krasnaya Zvezda– the number of officer posts will be reduced from 72 to 18, consisting of the chief editor, his deputy and senior secretary, editors of leading departments and interestingly any correspondent writing about combat training (Rossiyskaya Gazeta, October 6).

Critics of the reform argue that by centralizing all information services, and directly subordinating them to the defense ministry, that the military will become further detached from the existing information community within the country. Moreover, by drastically altering the system for providing information to favor the serving defense minister, little information will be presented beyond the control of the new structure. Press secretaries from the combat arms and branches of service will now serve on the payroll of the directorate. Although they will still be located at their former service posts, they will be accountable to the ministry’s press secretary; no commander will be able to speak outside the authority of the reformed directorate. Challenges stemming from these initiatives include the recruitment and retention of quality professional military journalists, which have traditionally been a function of a special faculty in the Moscow Military University. Nonetheless, this year the recruitment to the faculty was abandoned. One option under consideration envisages recruiting the few dozen student journalists from the university upon graduation to remove their epaulets and work as civilian reporters (Rossiyskaya Gazeta, October 6).

The new staffing arrangements were gradually introduced since February 2009, which commenced with the reduction and civilianizing of the military district information services. Instead of five to eight officer duty posts in each, there are now three or four civilians. In August, changes were introduced within the district newspapers. However, this was ridiculed as merely representing an inconclusive list of duties ranging from editor to janitor, without making adequate provisions for computer technicians or photographers. Others inevitably complain about low salaries. The editor-in-chief of Krasnaya Zvezda, for instance, receives a monthly salary of 13,600 rubles ($463), while his managers each get 8,490 rubles ($290). Correspondents are paid between 5,520 to 6,770 rubles ($188 to $230). Meanwhile, the pay scales within the district newspapers are markedly lower. The danger is that professionals with knowledge and expertise relating to military service might leave, while their posts are filled by dilettantes (Nezavisimaya Gazeta, October 2).

Although the circulation of many district newspapers was in decline, with their production schedules slashed from three weekly issues to just one, the key driving factor in these changes is undoubtedly linked to the radical reform of the armed forces. The Deputy Minister of Defense Nikolay Pankov confirmed that large-circulation newspapers and printing plants will be included within the new permanent readiness brigades. To this end, printing shops are being purchased and regular television studios will be created in the directorates of the military districts and fleets. Significant levels of money will be needed to support such high-technology media, though many doubt that savings from eliminating the former information structures will prove to be sufficient (Nezavisimaya Gazeta, October 2).

In this context, as the information services are transformed, on October 14 the defense ministry also announced that it will create an information center for “countering and preventing attempts to discredit the armed forces and navy.” “The propaganda center will train personnel responsible for countering information attacks aimed at discrediting Russia and its allies’ military organization,” a spokesman explained. The center will be supervised by the First Deputy Defense Minister Colonel-General Aleksandr Kolmakov, the former commander of the airborne forces (VDV) (Interfax, October 14).

Although any assessment of the implications of such radical change must necessarily be tentative, it is clear that in this phase of Russian military reform the overriding concern is to put the defense ministry’s house in order. As part of this process, by streamlining its information services and bringing this more tightly under defense ministry oversight, it will prove easier for the state to promote a positive image for the armed forces. If this strategy succeeds, critical commentaries might gradually appear marginalized, as the image making machinery eclipses the work of “independent” voices of dissent. The presence of official publications throughout the new brigade structure coupled with the formation of the propaganda center aimed at countering “information attacks,” suggests sensitivity at the highest levels over the “new look” Russian military. 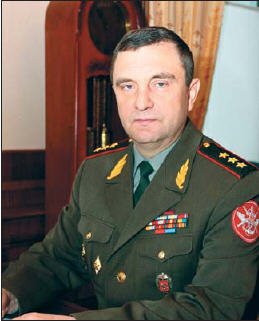