Three students from Karachi’s Jamia Uloom al-Islamia left their Islamic studies half way to completion and took a train to Peshawar on February 18, 1980 to take part in the nascent anti-Soviet jihad in Afghanistan. Anti-Russian passion was their only weapon, but they wanted to practice what they had learned in the classrooms of their madrassa. [1] The three students – Irshad Ahmed, Abdus Samad Sial and Mohammad Akhtar – later assumed grand religious titles; the first two became Maulana-s (“Our Master,” a title used for religious leaders with formal qualifications) while the third came to be known as Qari (“Reader,” i.e. one who recites the Quran). His colleagues later gave Qari Akhtar another grand title, “Saifullah” (Sword of Allah). They decided to call their three-member group the Jamiat Ansar-ul-Afghaneen (Party of the Friends of the Afghan people) and chose Irshad Ahmed as their first amir. The three students who formed Jamiat Ansar-ul-Afghaneen while still in their teens would later have a tremendous influence on the rise of Deobandi jihadism in South and Central Asia and beyond.

On their way to Afghanistan the trio joined a small Afghan Deobandi group in Peshawar, the Harakat-e-Inqilab-e-Islami Afghanistan (Islamic Revolutionary Movement of Afghanistan – HIIA) of Maulana Nasrullah Mansoor. Armed by the HIIA, the group crossed the Durand Line into Afghanistan where it became the principal jihadi group for students from the Pakistani Deobandi madrassas. It had already trained some 4,000 Pakistani madrassa students by 1988 when the Soviets started leaving Afghanistan. The Pakistani boys that  the HIIA had trained were later organized under the name of Harakat ul-Jihad al-Islami (Islamic Jihad Movement – HuJI) to wage jihad in Kashmir. [2] These 4,000 Deobandi jihadists provided the foundation on which the entire Pakistani Deobandi jihadist movement was founded in later years. Most of the Pakistani jihadist groups, including parts of the Tehrik-e-Taliban Pakistan (TTP), directly trace their roots to the HuJI.

HIIA and HuJI played another more important role, mostly ignored until now, by helping the Deobandi movement grow in largely Barelvi Afghanistan (the Barelvi are a less politicized branch of Muslims who place more stress on rituals). They not only recruited boys from the Pakistani Deobandi madrassas to fight jihad in Afghanistan, but also helped place Afghans in the Pakistani madrassas. These students later founded the Taliban movement. Thanks to HIIA, the Pakistani and Afghan Deobandis built a relationship that has survived against all odds. Interestingly, all the Pakistani Deobandi groups have split several times, but maintain unbreakable bonds with the Afghan Taliban, the main Deobandi group in Afghanistan.

HuJI in Kashmir and the First Split

At the end of the Afghan jihad in 1989, the HuJI looked for another theater of jihad and found one in nearby Kashmir. HuJI temporarily abandoned the Afghan theater of jihad completely and focused on Indian-administered Kashmir, which offered a gateway to India. The beginning was slow as Pakistan’s Inter-Services Intelligence (ISI) was not ready to unleash Pakistani jihadi groups in Kashmir for fear of reprisals from India. Moreover, the ISI was unable even to train and arm the boys crossing into Pakistan from Kashmir until 1991. [3] This period of relative inactivity gave birth to internal frictions in the group, which split in 1991. Maulana Fazlur Rehman Khalil and Maulana Masood Kashmiri led the revolt against the founding members and founded Harakatul Mujahideen. It is not clear what really caused the split. The founding members later alleged that Maulana Khalil was too subservient to the ISI and always sought publicity. [4] However, the split was a serious jolt to the HuJI, as the bulk of the mujahideen followed Maulana Khalil, their commander and teacher.

The split in the HuJI, an important recipient of Saudi money, made the Saudis very unhappy. They deputed a Mecca-based Deobandi alim (scholar), Maulana Abdul Hafeez Makki, to reunite the two groups. Maulana Makki immediately established contacts with an emerging jihadi alim, Maulana Masood Azhar, to fulfill this task (Masood later founded Jaish-i-Mohammad in 2000). Maulana Makki became a regular visitor to Pakistan in this period. [5] Their efforts bore fruit when the two groups reunited in 1993 under the name of Harakatul Ansar. Maulana Sadatullah became the amir of the united group. This is the time when the Kashmiri groups, particularly the Hizbul Mujahideen (the armed wing of Pakistan’s Jamaat-i-Islami and distinct from Harakatul Mujahideen), started showing weakness in the face of atrocities by the Indian security forces. This was also the time when the inflow of Kashmiri boys began decreasing. To keep the pot boiling in Kashmir, the ISI started encouraging Pakistani jihadi groups such as the HuJI to play a bigger role in the jihad in Kashmir.
Harakatul Ansar attracted a lot of attention the following year when, helped by a small group of Hizbul Mujahideen, it occupied the Islamic shrine at Charar Sharif in Indian-administered Kashmir. The event encouraged jihadis fighting in Kashmir and jolted the Indian security forces. After its success in Charar Sharif, Harakatul Ansar organized the kidnapping of some European and American tourists in Indian-administered Kashmir. A previously unknown group, al-Faran, believed to be a front group for the Harakatul Ansar, claimed responsibility. After several months the United States designated Harakatul Ansar as a terrorist group. As U.S. pressure increased on Pakistan to take action against Harakatul Ansar, the ISI apparently asked them to split once more. The group again split into HuJI and Harakatul Mujahideen. [6]

The al-Faran episode was a wake-up call for the Benazir Bhutto government, which started putting pressure on the ISI to come clean on the jihadi scene. It also came down a little harder on the jihadis. HuJI decided not to take all of this lying down. In the early second half of 1995, the Pakistani civilian intelligence discovered a plot by a small group of Islamist army officers led by Major General Zahirul Islam Abbasi. The officers were accumulating arms to take over command of the army and the government. The intelligence services discovered that the plotters had planned to eliminate the entire military command during the corps commanders’ conference on September 30, 1995. Major General Abbasi’s group was closely affiliated with HuJI and wanted to overthrow the Bhutto government to pave the way for a Taliban takeover similar to Afghanistan. HuJI was to help the rebel army officers. In his first interview with the author, Major General Abbasi denied any plan to overthrow the government but did admit that his group was transporting arms and ammunition from the Afghan mujahideen to the Kashmiri mujahideen. [7] However, in a subsequent interview, he admitted that they were taking action against the Bhutto government and the army command as part of their faith. [8] During both interviews, he admitted his links with the HuJI. However, before the trial of the military began, the ISI asked Qari Akhtar to go to Afghanistan. Qari Akhtar returned to Pakistan only when General Musharraf dismissed Prime Minister Sharif’s government.

In spite of severe differences amongst them, all of the Pakistani Deobandi groups and political parties maintained close links with the Afghan Taliban. Jihadi groups went further and established links with al-Qaeda after the rise of the Taliban in Afghanistan. Many of them, such as HuJI, trained their cadres in al-Qaeda’s training camps. The U.S. bombing and occupation of Afghanistan enraged the entire Deobandi movement in Pakistan. They turned their guns against General Musharraf when he decided to join the U.S.-led coalition against terror in order to save the Kashmir jihad. Half of the Deobandi jihadi movement decided to fight General Musharraf while the other half would remain in sleeper cells as part of the grand strategy. Qari Akhtar took up arms against his former benefactor, General Musharraf but fled Pakistan after failed assassination attempts on the Pakistani president. Qari Akhtar was arrested in Dubai in August 2005 and extradited to Pakistan. However, under the growing influence of the Islamists, he was never prosecuted. After the suicide attack on the arrival ceremony of Benazir Bhutto in October 2007 (which she survived), she blamed Qari Akhtar and others for planning it. He was arrested but was again let off the hook.

HuJI carried out several high-profile terrorist attacks in the years following 9/11 but claimed responsibility through previously unknown front groups. The attack on the then-finance minister and later prime minister, Shaukat Aziz, was claimed by the Islambouli Brigade; the attack on Lieutenant General Ahsan Saleem Hayat was claimed by the Jundullah of Karachi, and so on. Some of the other terrorist acts were claimed by or blamed on HuJI-al-Almi. It is important to note that most of the terrorists arrested in the post-9/11 period in Pakistan belonged to HuJI or to groups split from HuJI.

HuJI ran at least six training camps, three in Pakistan and three in Afghanistan, before the 9/11 attacks forced the terrorists to go underground. These training camps included Ma’askar (“camp”) Mehmood Ghaznavi in Kotli (Pakistan-administered Kashmir), Ma’askar Abu Ubaida bin Jarrah in Gilgit (Northern Areas of Pakistan) and Ma’askar Abu Haneefa in Mansehra (North-West Frontier Province). In Afghanistan, they ran Ma’askar Irshad in Jalaabad, Ma’askar Khalid Zubair Shaheed in Rashkor near Kabul and another camp in Kirgha near Kabul. Ma’askar Mehmood Ghaznavi in Kotli was used by Brigade 313 [9], the wing dedicated to jihad in the Jammu region of Indian administered Kashmir while the remaining five trained jihadis from all over the world, including al-Qaeda cadres. [10] 313 Brigade leader Ilyas Kashmiri was arrested in the wake of the failed assassination attempt on Musharraf in December 2003, while Qari Akhtar succeeded in escaping for a time but was later arrested. Like Qari Akhtar and others, Commander Kashmiri escaped punishment thanks to the growing influence of the Islamists. In 2005, Commander Kashmiri moved to the Waziristan region where he coordinates his group’s activities with the TTP and al-Qaeda. Commander Kashmiri is a prime suspect in coordinating the suicide attack on Forward Operating Base Chapman in the Khost province of Afghanistan in December 2009 that killed seven CIA officers and injured six others. The United States is currently seeking his extradition from Pakistan (The News, January 6). 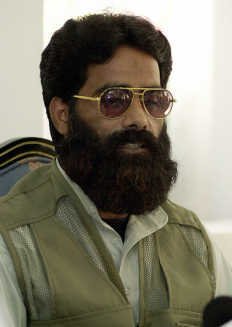 Back
Indonesian Counter-Terrorism: The Great ..Next
Mystery Persists in Assassination of Ira..

The Jamestown Foundation is proud to present a webinar on China’s... END_OF_DOCUMENT_TOKEN_TO_BE_REPLACED

On May 19, Voice of America posted an interview with Dr. Richard Arnold on the topic of Russian Cossacks’ involvement in the war against Ukraine. END_OF_DOCUMENT_TOKEN_TO_BE_REPLACED

The September Issue of Militant Leadership Monitor focuses on militant leaders in Africa and the Middle East. In the first brief, Nicholas A. Heras analyzes an Iraqi Shiite militia leader who has vowed vengeance if the United States and its Allies launch a strike on Syria. The second brief looks at... END_OF_DOCUMENT_TOKEN_TO_BE_REPLACED