Former Ukrainian prime minister Yulia Tymoshenko has formed an electoral bloc on the basis of her Fatherland party for next year’s parliamentary polls. Tymoshenko apparently believes that her own high popularity should be enough for a good performance in the election — there are no big parties in the Yulia Tymoshenko Bloc (BYuT), and there are no big names among the top 10 on the BYuT’s list, apart from Tymoshenko’s own. She makes no secret of her intention to return to the prime minister’s seat after the March 26 election, as the leader of a broad coalition, but not as broad as to include Viktor Yanukovych’s Party of Regions (PRU). Tymoshenko’s slogans remain populist.

BYuT’s pre-election congress on December 7 showed that, along with Fatherland, the BYuT will include the Social Democratic Party of Vasyl Onopenko (not to be confused with the United Social Democrats of former presidential administration chief Viktor Medvedchuk); United Ukraine of Bohdan Hubsky, formerly an ally and a business partner of Medvedchuk; and Levko Lukyanenko’s wing of the nationalist Republican Party Sobor (the core of the party with its leader, Anatoly Matvienko, has joined President Viktor Yushchenko’s Our Ukraine bloc).

Tymoshenko did not take under her wing the groups that swapped sides in her favor in the September quarrel with Yushchenko, when her allies accused top figures from Yushchenko’s entourage of corruption, and Yushchenko fired Tymoshenko’s cabinet. The liberal Reforms and Order party (RiP) refused to join Tymoshenko on her terms (see EDM, November 30). Instead, RiP on December 10 established a bloc with the youth party Pora, which played a crucial role in the Orange Revolution by mobilizing young intellectuals in big cities to back Yushchenko. The December 7 BYuT’s congress did not see the participation of Yushchenko’s former administration chief Oleksandr Zinchenko either. Zinchenko triggered the September scandal with his accusations of corruption against the then-security supremo Petro Poroshenko, Yushchenko’s first aide Oleksandr Tretyakov, and influential MP Mykola Martynenko. Zinchenko said he would not join Tymoshenko in protest over the presence of certain controversial businessmen in her bloc.

Oleksandr Volkov, formerly a close aide to Kuchma, was one of the businessmen named by Zinchenko. Along with Hubsky and Volkov, the list of big businessmen who were in Kuchma’s camp before the Orange Revolution and who are now with Tymoshenko reportedly includes the Buryak brothers who are owners of Brokbiznes Bank; tycoon Vasyl Khmelnytsky; Kuchma’s former representative in parliament Oleksandr Zadorozhny; and oil businessmen Oleksandr Abdullin and Petro Dyminsky. Most of them attended the December 7 congress.

Addressing a rally in Lviv on December 3, Tymoshenko explained why her bloc is running in the election separately from Yushchenko — to give the Orange Revolution forces more seats in parliament, she said, quoting sociologists — and what the BYuT will do after the vote. According to Tymoshenko, the parliamentary polls will be essentially the election of the prime minister, as the constitutional amendments coming into force in 2006 limit the president’s power, and a parliament-elected primer minister will come to the fore. After the election, she said, the BYuT will form a coalition with Our Ukraine, so as to outplay Yanukovych’s PRU in a fight for the prime minister’s post. Tymoshenko wants to take that post back from Yuriy Yekhanurov.

On December 7, Tymoshenko presented the BYuT’s “Ideal Ukraine” action plan, which calls for high social spending, frequent referendums (“Referendums should be as matter-of-fact as breathing fresh air,” Ukrayinska pravda quoted her as saying), integration into the EU, and the continuation of the reprivatization policy — for which the Tymoshenko cabinet was especially criticized by the business community.

Tymoshenko’s populism, however, does not increase her popularity as the election campaign goes on. Opinion polls show that the BYuT reached the peak of its popularity in September-October, immediately after Tymoshenko’s dismissal from the government. The BYuT was then slightly more popular than Our Ukraine. Now Our Ukraine is slightly ahead of the BYuT, and the two trail behind the PRU, according to recent polls by the Razumkov Center and the Ukrainian Sociology Service (USS). Among the three leaders of the race, only the BYuT lost several percentage points over the past several months, according to the USS. 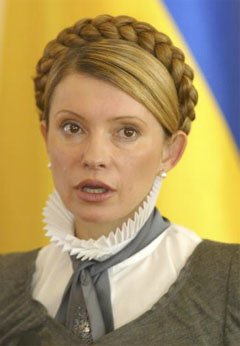 Back
RUSSIA INSISTS ON TRANSFORMING THE TERMS..Next
RUSSIA EYES STRONGER ECONOMIC TIES WITH ..