January marks a year since Islamic State announced its official expansion into Afghanistan. On January 26, 2015, Abu Muhammed al-Adnani, Islamic State’s chief spokesperson, released an audio statement in which he declared the establishment of Wilayat Khorasan, a branch of the group “encompassing Afghanistan, Pakistan and other nearby lands” (Jihadology, January 26, 2015). Since then, Wilayat Khorasan has pursued a campaign of expansion and consolidation in the region, with most of its activity centering in eastern and southeastern Afghanistan. The group, however, has experienced several setbacks on the battlefield that have raising questions about the group’s staying power and future prospects in Afghanistan.

Collapse of the Islamic Movement of Uzbekistan

The most crushing defeat that Wilayat Khorasan suffered in recent months was the annihilation of the Islamic Movement of Uzbekistan (IMU), which had pledged allegiance to Islamic State in August 2015. The IMU’s decision to join Islamic State marked a break from the group’s historic relationship with the Afghan Taliban.

In the 1990s, the Taliban provided the IMU with access to training camps in Afghanistan in exchange for a pledge of allegiance to Mullah Muhammed Omar. The IMU also contributed several hundred fighters to the Taliban’s ongoing conflict with the Northern Alliance (Carnegie, August 12, 2014). The relationship between the Taliban and the IMU continued beyond 9/11. Starting around 2010, the IMU collaborated closely with the Taliban in northern Afghanistan, facilitating the Taliban’s expansion into ethnic Uzbek areas (Eurasia Daily Monitor, April 26, 2013).

However, declaration of the Caliphate by Islamic State was a game-changer for the IMU. The group began to express support for the Islamic State in September 2014. Then, in August 2015 following a period of flirtation, the IMU released a video in which its emir, Uthman Ghazi, pledged allegiance to Islamic State and announced that the IMU would serve under the command of Wilayat Khorasan.

The IMU’s pledge of allegiance was received with great enthusiasm. In late August, the media wing of Wilayat al-Furat, also known as Wilayat Euphrates, produced an Uzbek-language video praising the IMU and calling upon Central Asian Muslims to join the Islamic State (Jihadology, August 21, 2015).

The excitement was short-lived. In August 2015, small skirmishes erupted between the IMU and the Taliban in Zabul province, where Ghazi and his supporters had settled. The Taliban then issued an ultimatum to the IMU: renounce the pledge of allegiance to Islamic State or leave Afghanistan (Afghan Islamic Press, September 2, 2015). Several IMU fighters realigned with the Taliban following this ultimatum, according to one press report, but a core group of IMU members, led by Ghazi, defied the Taliban and remained in Zabul (Afghan Islamic Press, November 28, 2015).

The conflict between the two groups escalated quickly. The Taliban launched an offensive in Zabul, attacking the IMU as well as Mansoor Dadullah, a Taliban splinter group commander who opposed the appointment of Mullah Akhtar Mansour as Mullah Omar’s successor. Contrary to several news reports, Dadullah never joined Islamic State and remained loyal to the Taliban worldview. However, he maintained an alliance with the IMU in Zabul that pre-dated the latter group’s pledge of allegiance to the Islamic State.

The IMU stood no chance against the Taliban onslaught. In mid-November 2015, an IMU member posted a desperate audio message on Facebook in which he explained that the Taliban had killed hundreds of IMU fighters in Zabul and had laid siege to remaining IMU militants. The fighter concluded his message: “This might be our last appearance on the Internet.” [1]

That prediction proved prophetic. On December 9, an Islamic State supporter posted an Arabic-language statement on his Twitter account detailing the IMU’s demise at the hands of the Taliban. According to this statement, the Taliban killed the remaining IMU fighters in Zabul, as well as Dadullah and 45 of his relatives. The statement also reported that the Taliban had captured Ghazi, though other reports claimed that Ghazi was killed (SITE Intelligence, December 11, 2015).

Regardless of Ghazi’s fate, it was clear the Taliban had brought a decisive end to the IMU. As the Islamic State supporter noted in his statement: “The Taliban achieved in 24 hours what the Americans were unable to do in 14 years.”

The IMU’s collapse in Zabul is not the only battlefield setback Wilayat Khorasan has experienced in Afghanistan. In recent months, Taliban militants, Afghan security forces, and local militias have chipped away at Wilayat Khorasan-held territory in Nangarhar province along the Pakistani border in eastern Afghanistan, where the group had hoped to establish a base of operations.

Wilayat Khorasan initially appeared to be on a steady upward trajectory in Nangarhar, with Islamic State reportedly killing Taliban shadow governors from three districts in Nangarhar in May 2015, facilitating the group’s growth in the province (Pajhwok, May 17, 2015). By the following month, Wilayat Khorasan held territory in at least six districts in Nangarhar and began disseminating Islamic State propaganda to local populations and destroying poppy fields – signs that the group was looking to consolidate its control in the province (Reuters, June 29, 2015).

In July 2015, however, U.S. drone strikes killed several Wilayat Khorasan leaders in Nangarhar, including former Pakistani Taliban spokesman Shahidullah Shahid (Dawn, July 9, 2015). Several months later, a provincial parliament member from established a local militia intended to combat Wilayat Khorasan, although the militia itself has been mired in controversy because of its involvement in extra-judicial killings (AFP, December 27, 2015).

The biggest threat to Wilayat Khorasan, however, has come from the Taliban. In October 2015, the Taliban established a special forces unit, comprised of highly skilled and experienced militants, to combat the Islamic State (BBC, December 18, 2015). After taking on the IMU in Zabul, the unit went on the offensive in Nangarhar, reversing many of the gains Islamic State had made earlier in the year.

Wilayat Khorasan’s biggest defeat came in early January 2016, when Taliban forces drove Islamic State out of two districts in Nangarhar (Voice of America, January 5, 2016). According to U.S. military officials, by late January, the group had been “pushed back to the southern parts of Nangarhar province.” [2] In mid-February, Wilayat Khorasan suffered another major loss in Nangarhar, as Afghan army and police units backed by U.S. airstrikes drove the group out of its stronghold in Achin district (Wall Street Journal, February 21, 2016).

Despite its recent losses in Zabul and Nangarhar, Wilayat Khorasan remains active in Afghanistan. Recent estimates indicate that there are approximately 7,000-8,500 Islamic State members in Afghanistan (RUSI, February 5, 2016), including about 1,000 fighters still in Nangarhar (New York Times, January 31, 2016); the group has demonstrated an ability to carry out terrorist attacks in urban areas, including Nangarhar’s capital of Jalalabad.

However, Wilayat Khorasan’s recent defeats make it clear that the Taliban poses a serious obstacle to the Islamic State’s expansion in Afghanistan. Unless Wilayat Khorasan can either co-opt or overpower Taliban forces in Nangarhar and other provinces, the group risks becoming strategically irrelevant.

Nathaniel Barr is the research manager at Valens Global, a consulting firm that focuses on violent non-state actors. 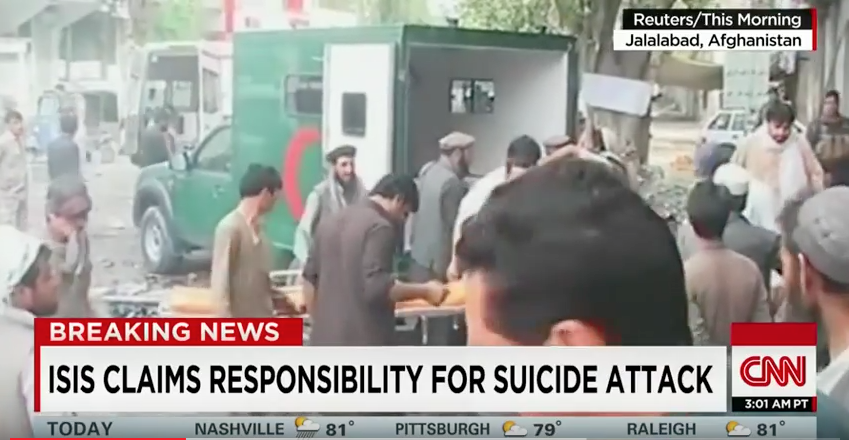 Back
Capitalizing on Chaos: AQAP Advances in ..Next
AQIM’s Resurgence: Responding to Islam..

Jamestown President Glen Howard was quoted in an article today in the Wall Street Journal on the ongoing Russian military buildup on the border with... END_OF_DOCUMENT_TOKEN_TO_BE_REPLACED

On April 15, The Jamestown Foundation held a conference on Yemen on the Brink: Implications for U.S. Security Interests in the Horn of Africa at the Carnegie Endowment for International Peace in Washington, DC. The full-length DVD covers the entire conference proceedings, which includes keynote speakers: Ambassador Daniel Benjamin,... END_OF_DOCUMENT_TOKEN_TO_BE_REPLACED