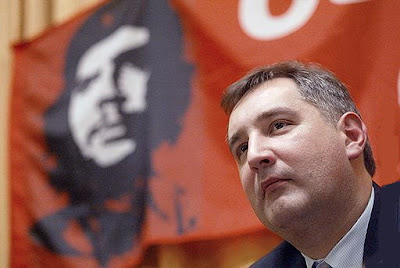 by Giorgi Kvelashvili
For the full text of this article see the Jamestown Eurasian Daily Monitor.

On October 30th, Russia’s Permanent Representative to NATO, Dmitry Rogozin, gave an interview to Ekho Moskvy Radio, in which he severely criticized America’s Georgia policy. Quoted by most of Russia’s news agencies, Rogozin said: “No one has abandoned the idea to use Georgia as a counterbalance to Russia…[Georgia is] a toothache or a headache for us in the Caucasus; as far as we are concerned, these attempts will continue.”

When answering the question regarding the future of the relations between Moscow and Washington if the United States deploys military bases in Ukraine and Georgia, the high-profile Russian envoy, a fierce critic of the current leaderships in Kyiv and Tbilisi said, “a few days ago there was a statement by a high-rank representative of the Obama Administration that Washington has no plans whatsoever to establish military bases” in those countries.

On the one hand Vershbow stated that the Obama Administration does not plan to use territories of non-NATO countries for future air defense installations, but on the other he once again reiterated America’s commitment to Georgia’s sovereignty by saying that “the protection of Georgia’s territorial integrity is a matter of principle for the United States,” and that America wants to have Georgia as “a strong, independent and sovereign partner that will be able to defend itself.”

Rogozin and in fact the entire Russian political establishment look puzzled about the United States’ future steps vis-à-vis Georgia’s security. “We do not know what to believe since we have heard so many contradictory statements over the past month and half.” Rogozin also added that “the Russian side would like to receive more clarity in this regard from the Administration of President Obama.”

Russia’s major concern seems to be the upward trajectory of U.S.-Georgian security and military cooperation, one of the pillars of the U.S.-Georgia Charter on Strategic Partnership. Joint exercises of the American and Georgian military have already become a commonplace. Rapid Response 2009, the latest one, was recently held at Vaziani, one of Georgia’s best-equipped military bases near the capital Tbilisi. The United States has also committed itself to providing Georgia with military planning and training assistance.

Although the declared goal of the exercises was to train Georgians for their participation in NATO’s military operations in Afghanistan (Tbilisi intends to send troops there in December), Russia’s reaction was unusually swift and critical, making clear its deep suspicion about the role of the American military in Georgia. In Rogozin’s words, “any military activities near the Russian borders causes Moscow’s concerns, especially when they involve the American military.”

Moscow’s envoy to NATO also added that “there must be an agreement between Russia and NATO as soon as possible to create trust between us.” It seems Moscow’s worst nightmare would be America’s permanent military presence in Georgia that would entirely thwart the current Russian leadership’s geo-strategic aspirations regarding “a zone of privileged interests.”

In regard to Georgia’s NATO membership which Moscow apparently wanted to undercut by invading Georgia, Russia also failed to achieve a desired outcome. Although the prospect of Georgia’s membership might seem more distant now than would have been in the absence of the Russian military aggression, it is not at all taken by NATO’s enlargement agenda. In Vershbow’s words, as reported by Russian media, “it is extremely difficult to say” when Georgia will join NATO and in Washington’s view the process “could take years”.

Meanwhile, Washington’s and its allies’ support for Georgia’s NATO choice remains unchanged. On October 30th the Georgian media reported NATO’s Spokesperson James Appathurai as saying that “the improvement of relations between the Alliance and the Russian Federation will not hinder the process of Georgia’s and Ukraine’s integration into NATO”.

Russia’s anxiety about Washington’s deepening cooperation with Tbilisi is perfectly understandable. Despite Moscow’s incessant attempts to bring Tbilisi back to its geopolitical orbit, Georgia, is now further from Russia than ever before. Even the war that Russia waged against Georgia in August 2008 failed to produce the outcome Moscow very much hoped for, namely, a regime change that would bring to power a pro-Russian leadership in Tbilisi or create anarchy and instability throughout Georgia.

Quite the contrary happened during the course of the war. Georgia abruptly withdrew from the Moscow-dominated Commonwealth of Independent States, to which Russia purportedly extends its “zone of privileged interests,” severed diplomatic relations with Moscow and in an even more surprising development signed the Charter on Strategic Partnership with the United States a few months later, in January 2009. Economically – while trade with Russia is steadily declining as a result of Moscow-imposed economic embargo on Georgian products- trade relations with Turkey, the United States and other NATO and European countries are on the rise, further distancing Tbilisi from Moscow’s political and economic orbit.

The Jamestown Foundation is pleased to host a forthcoming webinar... END_OF_DOCUMENT_TOKEN_TO_BE_REPLACED

Jamestown Foundation Analyst Kseniya Kirillova offered her expert analysis on Putin’s “partial mobilization” announcement to G-Zero. “The Kremlin calls it ‘partial’ so as not to... END_OF_DOCUMENT_TOKEN_TO_BE_REPLACED