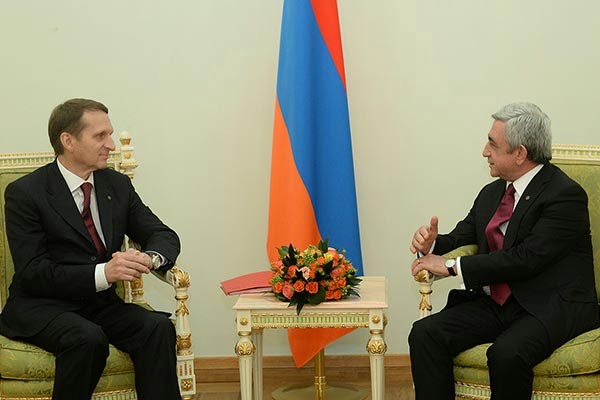 By Erik Davtyan
Although, on September 3, 2013, Armenian President Serzh Sargsyan declared Eurasian integration to be of primary importance for his country, and even though Armenia officially became a member of the Moscow-led Eurasian Economic Union (EEU) on January 2, 2015, officials in Yerevan have, nonetheless, continued to maintain some high–level relations with the European Union. However, following Armenia’s “European week”—the period in late March punctuated by a series of reciprocal visits, high-level talks, meetings and signed agreements between Armenia and the EU (see EDM, March 25)—Russian anger at Yerevan has become much more apparent.
On March 30–31, the chairman of the State Duma (lower house) of the Federal Assembly of Russia, Sergey Naryshkin, paid a working visit to Yerevan and held multiple meetings with top Armenian officials, including President Sargsyan (President.am, March 30). Naryshkin was also received by the speaker of the National Assembly of Armenia, Galust Sahakyan (Parliament.am, March 30). Friction in the bilateral relationship between the two allies became apparent during Naryshkin’s appearance at the Armenian parliament. Answering a question posed about Russian weapons sales to Azerbaijan, he confirmed that “the sales of the weapons, no doubt, have a commercial component” (Ra.am, April 1). Moreover, Naryshkin defended the practice by noting that all states that produce modern weapons naturally aim to provide income for their military industries. The Russian Duma chairman’s remarks that Armenia’s strategic partner will continue such military cooperation with Azerbaijan, which has hostile relations with Armenia, can be read as a warning to Yerevan. Specifically, though left unsaid, Naryshkin’s comments seemed to imply that any further rapprochement between Yerevan and Brussels would result in Moscow ramping up such arms sales to Baku as a form of pressure.
In fact, the sale of Russian weapons to Azerbaijan became a serious matter of concern in the second half of March. On March 18, during his 5th“At the Foot of Mount Ararat” media forum, President Sargsyan highlighted the seriousness of the issue. He declared that the main reason for concern is not the quality of the Russian armament but the fact that the weapons, bought by Azerbaijan, are being directed mainly against Armenian soldiers along the border. He declared that this issue may have a negative influence on Russian-Armenian relations (Silkroadreporters.com, April 7). On March 23, Armenian Defense Minister Seyran Ohanyan complained about the same issue to the secretary general of the Collective Security Treaty Organization (CSTO), Nikolay Bordyuzha, as well as to the CSTO Joint Staff chief, Lieutenant General Aleksandr Studenikin. Armenia is one of the founding members of the Moscow-led CSTO military alliance, and is the only member in the South Caucasus.

The two allies made some subsequent attempts to iron out these problems in bilateral relations. On April 7–8, Armenian Foreign Minister Edward Nalbandian made an official visit to Moscow (Mid.ru, April 8). During the joint press-conference with his Armenian counterpart, Russian Foreign Minister Sergei Lavrov specifically mentioned “Russian President Vladimir Putin’s personal involvement last year in international efforts to prevent a further escalation in tensions in the [Karabakh] conflict zone.” In his remarks, Lavrov tried to soften the tough statements made by Naryshkin, in Yerevan, the previous week. Nevertheless, it is obvious that the original message delivered by the Duma chairman in the Armenian Parliament, just following Armenia’s “European week,” had served specifically to caution Armenia against any further possible rapprochement with the EU—especially ahead of the upcoming Eastern Partnership summit in Riga.

Back
‘The Most Ukrainian Russians’ Are in..Next
Siloviki Increasingly Moscow’s Weapon ..

The Jamestown Foundation is pleased to host a forthcoming webinar... END_OF_DOCUMENT_TOKEN_TO_BE_REPLACED

Jamestown Foundation Analyst Kseniya Kirillova offered her expert analysis on Putin’s “partial mobilization” announcement to G-Zero. “The Kremlin calls it ‘partial’ so as not to... END_OF_DOCUMENT_TOKEN_TO_BE_REPLACED