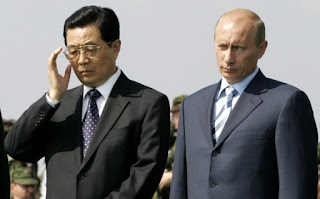 By Sergei Blagov
Russia’s natural gas monopoly Gazprom has repeatedly pledged to start natural gas exports to China. However, these plans have remained on paper, despite numerous promises to the contrary.
On October 25, Russia’s Deputy Energy Minister Anatoly Yanovsky announced that yet another round of bilateral talks on gas prices was expected before the end of this month. However, he refrained from disclosing more details or commenting on whether the much-awaited bilateral deal could become a reality. The matter was last discussed during President Vladimir Putin’s visit to China on June 5–6, 2012. The RBC news agency commented that the two sides’ disagreement over gas prices differed by some $100 per one thousand cubic meters (RBC, October 25).
Gazprom’s project to build the Altai gas pipeline from Siberia to China has been stalled for years as both sides struggled to agree on gas prices. More than six years ago, Moscow first pledged to export Russian gas to China via a 6,700-kilometer Altai pipeline. In March 2006, Gazprom and CNPC signed a memorandum on the delivery of Russian natural gas to China.
Gazprom offered to supply gas at European prices, while CNPC insisted on lower rates. Initially, Russian officials expected a final agreement on the cost of gas to be concluded in 2009, and gas supplies to start in 2014–2015. In September 2010, Russia and China signed a binding agreement on gas supplies that envisaged Russian exports of up to 38 billion cubic meters (bcm) per year from Eastern Siberia and 30 bcm per year from Western Siberia.
Indeed, in October 2011, then Prime Minister Vladimir Putin said that bilateral talks on the terms of Russian gas supplies to China “were nearing completion.” Then Deputy Prime Minister Igor Sechin also stated that both sides achieved progress in negotiations on gas prices. When asked whether the gas contract could be signed by the end of 2011, Sechin said there was no rush, adding that both sides agreed to finalize a “roadmap” in two weeks (Interfax, ITAR-TASS, October 10, 2011). While, in September 2012, Gazprom noted some progress in pricing negotiations with Chinese partners, but did not elaborate (Prime-Tass, October 25).
However, the latest developments indicate that both sides have yet to conclude any binding agreement on gas prices, and the bilateral negotiations have remained inconclusive. Therefore, the Russian plans to export gas to China apparently remain stalled, as do Moscow’s intentions to diversify the country’s natural gas exports.

Back
A New Lease on Life for Poland’s Most ..Next
Ukraine’s Elections Produce Few Surpri..

The Jamestown Foundation is pleased to host the webinar, “The... END_OF_DOCUMENT_TOKEN_TO_BE_REPLACED