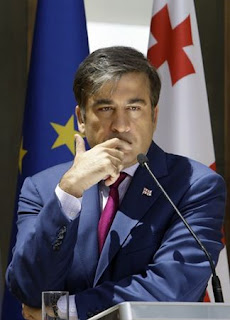 On August 11, 2010, Russia announced that it deployed S-300 anti-aircraft missiles on the territory of the occupied Georgian region of Abkhazia. In his statement the commander of the Russian Air Force, Alexander Zelin, said that the powerful missiles were needed to provide air defense for Abkhazia and the other occupied Georgian region, “South Ossetia.” The Russian general added that apart from the S-300s, “front and army aviation” would also be employed in both territories to strengthen the air defense potential.

Two years after the full-scale invasion of Georgia, Russia not only maintains a heavy military presence in the occupied regions but has significantly advanced its strategic capabilities, which leaves Georgia extremely vulnerable to another Russian invasion. The political process to solve Tbilisi’s outstanding security problems at Geneva shows no signs for hope, and the ceasefire agreement signed through the mediation of the European Union is not working. To make the situation even worse, Georgia lives under an effective arms embargo and outside of any functioning security framework. The United States and the West’s interests seriously suffer, as well, since Russian advances into the South Caucasus diminish the region’s potential to be a reliable security and transport corridor for the operation in Afghanistan and a valuable route for energy sources from the Caspian.

The announcement of the missile deployment came three days after Russian President Dmitry Medvedev, accompanied by Anatoly Serdyukov, his defense minister, visited Abkhazia from where the majority Georgian population had been expelled in a brutal ethnic cleansing before Russia declared it independent fifteen years later, in 2008. Tbilisi condemned both Medvedev’s visit and the S-300 deployment as “cynical” moves aimed at “destabilizing the situation” and “escalating tension in the Caucasus region,” and called on the international community “to force Russia to respect the universally recognized norms and principles of the international law and to unconditionally fulfill the commitments under the six-point [ceasefire] Agreement.”

On August 12, which marked the two-year anniversary of the ceasefire between Russia and Georgia, Tbilisi came up with yet another statement accusing Moscow of being in gross violation of all six points of the agreement. “Instead of fulfilling the commitments,” the statement read, “Russia is continuously increasing the military presence on the occupied territories of Georgia and is building the military bases in order to ensure its illegal presence on the ground (5 military bases [and], approximately, 10,000 military personnel.)” Besides, Russia does not allow the only international force on the ground – the European Union’s Monitoring Mission (EUMM) – created under the auspices of the agreement “to thoroughly fulfill its mandate and have access to Georgia’s occupied territories.”

By creating and strengthening its military capabilities in Georgia’s Abkhazia and Tskhinvali region/South Ossetia, Russia is violating not only the ceasefire agreement but the most fundamental principles of international law as well, including those adopted within the framework of the Organization for Security and Cooperation in Europe (OSCE) and the Conventional Forces in Europe (CFE) treaty. Notably, Moscow suspended its participation in the CFE in late 2007, months before invading Georgia.

Russia is reorganizing its military districts as part of the military reform. It was announced on August 12 that the newly created “South” Military District will now include the former North Caucasus district, which will be reinforced with other territorial units as well as the Russian bases in the occupied Georgian regions and in Armenia. The Russian news agency Regnum, close to the Kremlin, said in its publication that the reorganized military district will be capable of “delivering a more effective counterstrike” during war, “particularly with Georgia.”

The Georgian government should double its efforts to raise international awareness about its security concerns and ask the United States and other Western countries to exert more pressure on Moscow so that the latter feels obligated to meet all requirements of the ceasefire agreement. Besides, Tbilisi should speed up its military reform aimed at strengthening its command system and, overall, making the armed forces more efficient and the reserve system truly functioning.

Back
Is Russia Decoupling South Ossetia and A..Next
Why Is Russia Unhappy with the U.S. Terr..

On August 4, the Jamestown Foundation held a webinar  on... END_OF_DOCUMENT_TOKEN_TO_BE_REPLACED

On September 11, Jamestown Foundation Senior Fellow Janusz Bugajski was interviewed by the Polish Naval War Academy regarding his book, Failed State: A Guide to Russia’s... END_OF_DOCUMENT_TOKEN_TO_BE_REPLACED

The July 2019 Issue of Militant Leadership Monitor features a brief on how the death of Zakir Musa will impact al-Qaeda in Indian Kashmir; a analysis of the effect General Ali Kanna’s appointment as commander of the GNA forces in the strategic southern Libyan province of Fezzan will affect... END_OF_DOCUMENT_TOKEN_TO_BE_REPLACED