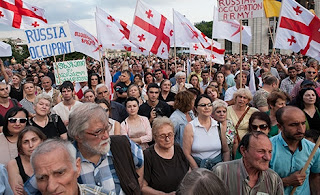 By George Tsereteli
Over the past two weeks the issue of Georgia’s so-called “border” with the Russian-occupied breakaway region of South Ossetia has again garnered attention. As reported by multiple sources and eyewitnesses, on July 10, Russian troops placed border markers even further into Georgian territory, again violating the country’s sovereignty (Civil Georgia, July 11). Reactions to this provocation have varied both nationally and internationally, but one thing is clear: these activities are a part of a broader Russian strategy of destabilizing Georgia from within.
The fact that the border markers have been moved is not a new development. Since the 2008 Russo-Georgian War, there have been frequent reports of similar activities, though they have not always caught the attention of the media. A section of the Baku-Supsa pipeline falling under the Russian-occupied territory is likewise not a novel development; since the 2008 war, it was approximated that about a 1.4-kilometer section of the pipeline fell under occupied territory, while the outcome of the recent border marking has resulted in around 1.6 kilometers of the pipeline becoming inaccessible to Tbilisi. For now, Georgian Energy Minister Kakha Kaladze has stated that the pipeline has not had any disruptions and continues to operate as usual. If any problems were to arise, according to Kaladze, there is an alternative plan that could be put in place immediately, which would bypass that section of the pipeline (Civil Georgia, July 12).
Yet another cause of outrage, understandably, has been that the “border” is now within eyesight of Georgia’s highly important East-West highway, which currently passes less than a kilometer from the Russian checkpoints. This, indeed, has truly daunting implications (see EDM, July 20). But even before the most recent border-marking activities, if Russian troops had wanted to cut off the highway, they could have done it with about as much ease as they can now. According to eyewitness accounts including this author’s, the administrative “border” could have been seen with the naked eye from the East-West highway even before the most recent changes; the de facto boundary is now about half a kilometer closer to the highway than it was before (The Fifth Column, July 22).
The negative strategic, economic and psychological impact of the recent events on Georgia are undeniable. According to some estimates, as much as 53 hectares (130 acres) of Georgian territory has been newly swallowed up in recent weeks, with devastating effects on those living in the area (Pirveli Arkhi/1TV, July 21). However, perhaps even more significant in a long-term context is the internal strife that has come about as a result. In the week that followed the Russian actions, a group of Georgian activists and journalists from Tbilisi tore down a border sign and staged a small protest near the new administrative border, which led to minor clashes with Georgian police and the subsequent banning of access to non-locals to nearby towns in the name of security (Regional Dialogue, July 21).
While on a July 21 visit to Tbilisi and the administrative border region, European Council President Donald Tusk reaffirmed the European Union’s commitment to Georgia’s territorial integrity and praised Tbilisi’s “responsible” reaction to the recent “provocations.” However, many Georgians have disapproved of their government’s lackluster response (Interpressnews, July 21). Just three days before Tusk’s visit, this disapproval was demonstrated as thousands of protesters gathered in downtown Tbilisi. The protest was mostly aimed against Russia’s actions, but those present were also highly critical of the Georgian government, claiming that the government’s reactions were inadequate and “cowardly” (Civil Georgia, July 18). These reactions, indeed, have consisted of little more than countless hollow-sounding statements.
Clearly, the recent border-marking activities of Russian occupying troops have led to frustration and internal divisiveness in Georgia. This is no accident on the part of the large belligerent northern neighbor. One need not look further than contemporary Russian military theory to see that the latest actions are a part of Moscow’s broader war-making strategy. According to the concept of sixth generation warfare, war does not stop, it occurs continuously in the form of preparation for war with varying intensity and centers of gravity (V. A. Vinogradov, “Trends in the Conduct of Operations in a Major War,” Military Thought, 2013 via Baltic Defence College Journal on Baltic Security, 2015, p. 62). More specifically, in his book General Theory of War, Russian Major General Alexander Vladimirov describes the evolution from the formerly clear distinction between peace and war, to the new, permanent war, where the boundary between peace and war becomes a hazy transitional state of fear and insecurity. He goes on to explain three aspects of the new eternal war: A shift from war about territory to a war of an existential nature; a transition from war to destroy and annihilate to the exertion of political, economic and cultural influence; and the transition from a war of direct military engagements to a contactless war (Alexander Vladimirov, “General Theory of War,” 2013 via Baltic Defence College Journal on Baltic Security, 2015, p. 66). These features can all be seen through Russia’s actions in Georgia prior to the outbreak of the 2008 war and ever since, as well as in the ongoing conflict in Ukraine. The strategy, according to Vladimirov, becomes the use of indirect action with the goals to create organized chaos, direct influence over an opponent, and eventually, internal collapse.

The Georgian public’s deep frustration with Russian actions and with the inability of the Georgian government and international community to prevent the loss of more Georgian territories is certainly understandable. However, protestors, members of the media, and opposition party members have a vital responsibility to voice their displeasure in a productive way, and not to engage in destructive behavior that will cause internal divisiveness and disunity. The government, in turn, is overdue in reviewing its strategy for how it approaches the issue. It would be beneficial for the authorities, together with opposition parties, to work energetically to form a comprehensive and cohesive plan on how to avoid any further territorial losses. Above all, Georgians will have to keep in mind that the Russian strategy is to destabilize their country from the inside out, and this must be avoided at all costs.

Back
Russia Bets on China: Picking the Wrong ..Next
Armenia’s Perspectives on the Iranian ..