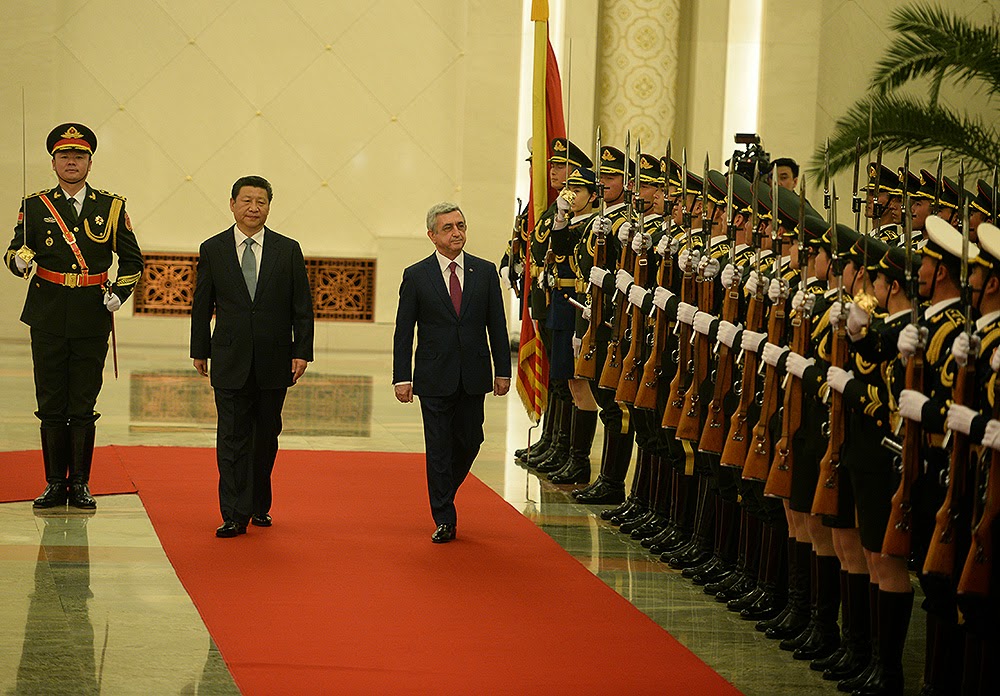 By Erik Davtyan
After a “European week” of active negotiations and mutual visits between the Armenian authorities and high officials from the European Union (see EDM, March 25), Yerevan shifted its focus to East Asia. On March 24–28, Serzh Sargsyan, the president of Armenia, paid a state visit to the People’s Republic of China (President.am, March 23). The last state visit to China by an Armenian head of state took place more than ten years ago (by then-president Robert Kocharyan). Thus, Sargsyan’s trip highlights the growing importance of developing Sino-Armenian relations. During the visit, President Sargsyan held a meeting with his Chinese counterpart, Xi Jinping, which resulted in the signing of a myriad of important agreements. These included the “Joint Declaration on Friendly Cooperation and Further Development and Enhancement of Relations,” as well as accords concerning the cooperation on the legal assistance, custom affairs, loans, education, scientific degrees, tourism, etc. (President.am, March 25). Additionally, President Sargsyan had meetings with Chinese Prime Minister Li Keqiang and the chairman of the Standing Committee of the National People’s Congress, Zhang Dejiang. He also delivered speeches at Peking State University and at the Boao International Forum.
The results of the visit should be analyzed from both political and economic aspects. In the context of political interests, both parties touched upon territorial disputes. The Joint Declaration stated that Armenia confirmed its support for the “One China” policy, expressed its stance against Taiwanese independence, and stressed that Taiwan is an inalienable part of China. In regards to the Karabakh conflict, the Chinese expressed a balanced position, confirming that the conflict should be resolved “according to the universally recognized norms of international law” (President.am, March 25). In fact, the successful development of bilateral relations concerned even politico-military affairs. The Joint Declaration also stated that Armenia and China “will not participate in any alliances or coalitions that focus against either party’s sovereignty, security or territorial integrity” (President.am, March 25). Consequently, though this document does not constitute a  military alliance, it contributes highly to mutual support for national security between the two countries.
As for the economic aspect, several points should be taken into consideration. First, Armenia and China signed the Memorandum on Promotion of Cooperation in Building the Silk Road Economic Belt. This immense project was proposed the President Xi in October 2013, with the aims of creating an economic “bridge” between Asia, Europe and Africa (Xinhuanet.com, March 28). Since Armenia is situated at the crossroads of Europe, the Middle East and Russia, the new Silk Road initiative may play a significant role in boosting the Armenian economy and international trade. The discussion of Armenia’s participation in the project will most likely be analyzed by the Armenian-Chinese Inter-governmental Commission on Trade and Economic Cooperation.

When delivering his speech at the Boao International Forum, on March 28, President Sargsyan touched upon Armenia’s readiness to become a center of interest for Asian businessmen. In this context, the North-South Road Corridor (connecting the northern and southern state borders of Armenia to high-quality international highways), as well as the future Armenia-Iran railway, can be used for developing the proposed Silk Road Economic Belt (President.am, March 28). These steps show that Armenia is attempting to diversify its international economic relations as much as possible. By being a part of the Russia-led Eurasian Economic Union (EEU), negotiating with the EU, and seeking new cooperation with Asia, Armenia is attempting to engage in ongoing and prospective economic projects to not only expand its international economic relations, but also to overcome the blockade and isolation policy of Turkey and Azerbaijan.

The Jamestown Foundation is pleased to host the webinar, “The... END_OF_DOCUMENT_TOKEN_TO_BE_REPLACED