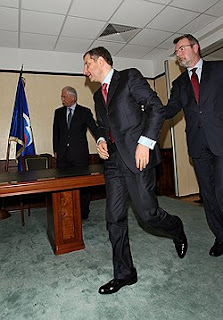 Zurab Noghaideli, Georgia’s ex-prime minister who now leads the pro-Russian Movement for a Just Georgia, in a little more than two months travelled several times to Moscow. During one of his December visits, he was even lucky enough to secure an audience with Russian Prime Minister Vladimir Putin. Noghaideli is the first and so far the only Georgian oppositionist to openly accept the Kremlin’s backing in a risky bid to oust President Saakashvili’s pro-Western government. Previously, Moscow shied away from granting overt support to any of the Georgian opposition personalities, preferring instead to do business with them behind the scene.

The question now is why the Kremlin has decided, all of the sudden, that the time has arrived to make no secret of its Georgia gambit. Or did it?

But first a few words about Noghaideli’s most recent activity. He made his fifth visit to Russia a few days ago and although he was not received by Putin this time, he brought a document to Georgia which he immediately called “historic.” The cooperation agreement between Zurab Noghaideli’s movement and Russia’s ruling party United Russia was signed on February 9 and the Russian news agency Regnum immediately entitled its article “Zurab Noghaideli and Boris Gryzlov signed the first post-war Russo-Georgian agreement,” as if this were an interstate agreement. Gryzlov is the speaker of the Russian Duma and the chairman of United Russia, while Noghaideli is just the leader of an opposition party in Georgia, and without a government job. The substance of the agreement and the form in which it was presented to the Russian public is reminiscent of the dozens of agreements signed by Soviet state and party leaders with foreign communist oppositionists during the Cold War.

Here are some of the most interesting clauses from the Gryzlov-Noghaideli manifesto: The relationship between the two sides is based “on the principles of independence, mutual respect, noninterference in one another’s affairs, equality, and partnership…Interparty ties should be an important part of the Russo-Georgian relations, and should aim at their normalization.” This overture is followed by more concrete pledges that the sides are eager to make, which include “exchange of information” on the situation in Russia and Georgia and “on bilateral and international relations,” and “familiariz[ing] each other with the experience in party-building… education and preparation of the cadres…participation in the legislative and executive branches…and in other spheres of mutual interest.” The agreement also covers cooperation through civil society and youth organizations.

Talking at the press conference upon his return to Tbilisi, Noghaideli boasted on February 11 that the pact with Russia’s ruling party will be “at the foundation” of future interstate relations with the Russian Federation and will be shortly “followed through with many concrete steps” aimed at “the restoration of direct flights between the two countries and the resumption of Georgian exports to Russia.”

Gaining the support of the Georgian public in establishing ties with Russia without regard for Georgia’s territorial integrity is at the core of Moscow’s Noghaideli project; what the ex-prime minister is trying to do is reconcile the Georgians with their loss of Abkhazia and Tskhinvali. The essence of the project is “restoration without preconditions.”

At least several opposition parties have started using the same language and Noghaileli claims “many Georgian politicians will follow suit.” Irakli Alasania, usually thought of in Europe as a more pro-Western than pro-Russian oppositionist, recently held talks in Munich with Russian Foreign Minister Sergey Lavrov. Although he was quick to state that he did not share the ex-prime minister’s agenda and spoke with the Russian foreign minister on Georgia’s de-occupation, Noghaideli hailed Alasania’s meeting with Lavrov and somewhat puzzlingly added, “one more ‘traitor’ joined our ranks.”

Very much in line with the spirit of the ‘Noghaideli project,’ Russian President Dmitry Medvedev reiterated on February 11 that “Mr. Saakashvili must be held accountable by his own people.” Given the fact that Noghaideli and, in general, pro-Russian forces in Georgia lack the public support needed as well as the constitutional means to force President Saakashvili from power, many Georgian analysts think that the ex-premier is just a ‘softer,’ PR part in the Kremlin’s scheme, which apparently includes “other means” to achieve policy goals.

Back
Property Rights in Russian-Occupied Abkh..Next
Czeching Out

On August 4, the Jamestown Foundation held a webinar  on... END_OF_DOCUMENT_TOKEN_TO_BE_REPLACED

On September 11, Jamestown Foundation Senior Fellow Janusz Bugajski was interviewed by the Polish Naval War Academy regarding his book, Failed State: A Guide to Russia’s... END_OF_DOCUMENT_TOKEN_TO_BE_REPLACED

The February 2021 issue of Militant Leadership Monitor features a brief on the recent arrest of the last fugitive responsible for the devastating 2002 Bali bombings; an update on the case of Ahmad Omar Saeed Shaikh, who was recently acquitted of killing Wall Street Journal journalist David Pearl; a... END_OF_DOCUMENT_TOKEN_TO_BE_REPLACED