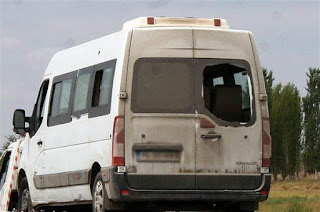 By Erik Davtyan
The governmental crisis and military operations of the Turkish Army against Kurdish forces has not only threatened the internal situation in Turkey, but is increasingly having a destabilizing effect on neighboring countries as well. Considering the wide geographic extent inhabited by the region’s Kurdish population, developments pertaining to the Kurdish question have clearly always interested Syria, Iraq and Iran. But as the conflict spreads eastward, security concerns are rising in Armenia and, to some extent, Azerbaijan.
On September 8, a minibus carrying Turkish police officers to the interstate border with Azerbaijan’s Nakhchivan Autonomous Republic was destroyed by a bomb attack (Azatutyun.am, September 8). This blast killed at least 14 Turkish officers and is, in fact, one of the most serious attacks by Kurdish forces in recent years. The attack took place near the Diludju border check point in Igdir province, an area that connects Turkey with Azerbaijan and separates Armenia from Iran. Thus, this attack’s location provoked deep anxiety in nearby Armenian villages, especially Ranchpar.
Considering the possibility of unexpected scenarios in Turkey-PKK relations spinning out of control, the national security threats to the rest of the region should not be underestimated. Armenian Turkologist Levon Hovsepyan explains that “military actions in regions close to the border with Armenia, indirectly (if not directly) influence the security environment” (Tert.am, September 15).
Meanwhile, with Turkey preoccupied with its domestic political and military turbulence, Armenian authorities launched a four-day (September 3–6) “Shant 2015” (Lightning 2015) command and staff military strategic exercise. As the deputy chief of the General Staff of Armenia’s Armed Forces, Movses Hakobyan, said, the “exercises aim to reveal the capabilities of the state in case of possible war” and added that “this is the first time Armenia is holding exercises of such scale, involving all state agencies” (Masispost.am, September 4). As part of this training, Armenian authorities simulated a situation whereby a camp for migrants crossing Armenia’s borders is opened in the district of Nubarashen, Yerevan. Though this simulation does not mean that there is a real threat of penetration by Kurdish migrants, it is obvious that, when planning the schedule of the trainings, Armenian authorities were weighing the possibility of such developments, including instability in Turkey’s bordering Igdir province. Indeed, the camp that was “opened” in the Armenian capital, as part of the Shant 2015 exercise, is quite close to the Armenian-Turkish border, which means that Armenia is primarily concerned about the possibility of uncontrolled migrant flows coming into the country from Turkey.
The latest armed Kurdish activity against Turkey has also provoked anxiety in Azerbaijan. Igdir province is the only passage through which Azerbaijan neighbors Turkey. Therefore the possible emergence of a chaotic situation in this part of Turkey would undermine the border security of the Nakhchivan Autonomous Republic. In the wider context, the escalation of the Turkish-Kurdish conflict weakens Turkey’s position in the Middle East, which is not welcomed in Baku. Azerbaijan’s large ally plays a key role in the South Caucasus, especially by supporting Azerbaijan on a myriad of issues, including the Karabakh conflict. A member of the Azerbaijani parliament, Fasil Mustafa, said that “Azerbaijan should minimize the threats coming from Turkey” (Panorama.am, September 8). The deputy believes that Azerbaijan should mobilize the Azerbaijani the population in Igdir and strive for a victory of the representative of the local Azerbaijani community in the upcoming elections in Turkey (scheduled for November 1).

In other words, as Kurdish forces extend their area of military operations, they directly or indirectly engage more states in the existing crisis, raising some security concerns in both Armenia and Azerbaijan.

The Jamestown Foundation is pleased to host a forthcoming webinar... END_OF_DOCUMENT_TOKEN_TO_BE_REPLACED