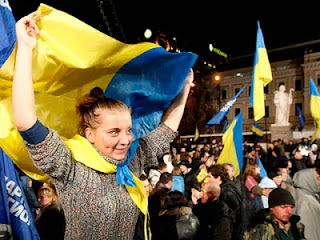 One can observer seven myths about the political and electoral situation in Ukraine that are currently being widely propagated by Ukrainian political technologists.

Myth 1: The Communist Party (KPU) increased its support in 2012.

Myth 2: Former Prime Minister Yulia Tymoshenko will be released from prison before the 2015 elections.

Reality 2: Tymoshenko’s sentence of seven years imprisonment and three years ban from public office aimed to remove her from Ukrainian politics until after 2020. In addition, personal revenge and fear play roles in her continued detention. In February 2010, Viktor Yanukovych told the US Ambassador to Ukraine he expected to win the 2010 presidential elections by over ten percent, but he won them by only three percent (http://wikileaks.org/cable/2010/02/10KYIV199.html#).

Myth 3: In 2015 Yanukovych’s political technologists will engineer his re-election.

Reality 3: In 2015, Yanukovych will not have the high support he possessed in 2004 when he was popular in eastern Ukraine and while the economy was growing by 12 percent per year. In the re-run second round of the 2004 elections, he was defeated by Viktor Yushchenko by only eight percent of the vote.

Election fraud in Ukraine may reach up to five percent of the vote, unlike in most Eurasian countries where it is greater. In the fraudulent second round of the 2004 elections, the Central Election Commission claimed Yanukovych defeated Yushchenko by three percent. Increasing Yanukovych’s support from 20–25 percent to 48 percent (which he won in 2010) will be practically impossible without resorting to mass fraud.

Myth 4: Political technologists will manipulate the 2015 elections so that Communist Party leader Petro Symonenko or Svoboda nationalist leader Oleh Tyahnybok will enter the second round. Political technologists believe Yanukovych can only win a second term if he repeats the 1996 Russian and 1999 Ukrainian presidential elections where Boris Yeltsin and Leonid Kuchma encouraged Ukrainians to vote against them and support the incumbent. In 2015 Tyahnybok could play the role of Symonenko in 1999.

Reality 4: Opposing Viktor Yanukovych in the second round will be opposition leaders Arseniy Yatseniuk or Vitaliy Klychko who would defeat Yanukovych if Ukraine holds a free election in 2015—but which is unlikely because Yanukovych has presided over five fraudulent elections since 1999. Former US Ambassador to Ukraine Steven Pifer said nobody in the West any longer believes Ukraine is democratic (http://tyzhden.ua/Politics/65125).

Myth 5: Voting “proty vsikh” (against all) only works against “orange” leaders. In the second round of the 2010 elections, Yushchenko called on voters to vote against both candidates reducing support for Yulia Tymoshenko more than Yanukovych.

Reality 5: Proty vsikh works against any incumbent. In 2010, many “orange” voters stayed at home rather than vote for Tymoshenko who received three million fewer votes than Yushchenko in December 2004. Two million fewer eastern Ukrainian voters supported the Party of Regions in 2012 compared to 2007. In 2015, Yanukovych will face the same incumbent problem as Tymoshenko, but this time it will be eastern Ukrainian voters who will vote proty vsikh by staying at home.

Myth 6: Yanukovych will engineer his re-election by changing the constitution to a parliamentary system to avoid an election. The newly adopted law on referendums could be used to circumvent the need for an election in 2015 (http://www.kyivpost.com/content/ukraine/new-wording-of-constitution-could-be-approved-at-nationwide-referendum-according-to-law-315646.html).

Reality 6: The Party of Regions will be unable to command the loyalty of a constitutional majority to change the constitution to a full parliamentary system. In addition, Yanukovych would never agree to be a symbolic head of state under parliamentary control and with few powers.

Myth 7: Oligarchs will be forced to support Yanukovych in 2015.

Reality 7: Fearing Tymoshenko’s anti-elite rhetoric, Ukraine’s oligarchs supported Yanukovych in 2010. Former President Leonid Kuchma told the US Ambassador to Ukraine that the second round of the 2010 elections was a choice between “bad” and “very bad” (Yanukovych and Tymoshenko). (http://wikileaks.org/cable/2010/02/10KYIV190.html).

The 2015 election will be unlike 2010 and instead will resemble 2004 where oligarchs will put their eggs in the authorities and opposition baskets. Oligarchs will not fear Yatseniuk or Klychko because they are not viewed as threats to their business interests (http://www.kyivpost.com/content/politics/media-monitoring-shows-possible-rift-between-oligarchs-administration-315438.html). Ukraine’s “gas lobby” has supported Yatseniuk in the 2010 elections and Klychko in 2012.

Rather, Ukrainian oligarchs will be more afraid of Yanukovych. They will fear that “The Family” (the emerging clan from the president’s home town in Donetsk oblast, see EDM, December 2, 2011) will raid their assets by the end of his second term in 2020 (http://www.project-syndicate.org/commentary/will-yanukovych-win-the-ukrainian-elections-by-anders–slund).

As Ukraine will face serious economic and financial crises in 2013-2014 (see EDM, November 29), the run up to the 2015 elections along with politics in the parliament will be raucous and unstable. However, the widely disseminated predictions from Ukrainian political technologists for how the country’s next political developments will be shaped are based on fundamental misdiagnoses and misunderstandings of past and future trends.

The Jamestown Foundation is pleased to host the webinar, “The... END_OF_DOCUMENT_TOKEN_TO_BE_REPLACED

“Changing of the Guard: Beijing Grooms Sixth-Generation Cadres for 2020s” details the major generational changes that will take place in the party-and-state leadership at the 18th Chinese Communist Party (CCP) Congress set for October 2012. While Fifth Generation leaders like Vice-President Xi Jinping remain poised to accede to the... END_OF_DOCUMENT_TOKEN_TO_BE_REPLACED