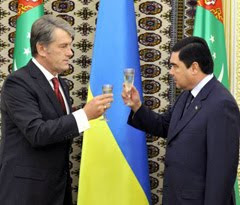 Ukrainian President Viktor Yushchenko completed his state visit to Turkmenistan on September 16 and returned to Kyiv empty handed according to a number of Ukrainian energy experts and political observers.

The purpose of Yushchenko’s trip was ostensibly to try and convince Turkmen President Gurbanguly Berdumykhamedov to sign a direct gas contract with Ukraine that would bypass Russia’s Gazprom. Numerous references to this goal appeared in the Ukrainian media prior to the trip, most of which were propagated by Yushchenko’s energy advisor Bohdan Sokolovsky.

In his September, 14 interview with RFE/RL, Sokolovsky said Ukraine stands a good chance to resume direct supplies of Turkmen gas.

When asked how real the prospect of direct supplies is, Sokolovsky said, “What depends on the will of two parties and does not harm the third one is always real. We have a chance to map out such a format of cooperation which would interest even third parties.”

“I can see excellent prospects for deepening and strengthening gas cooperation with Turkmenistan, with third parties only standing to gain,” Sokolovsky added.

Others in Kyiv, not employed by the presidential administration, were less enthusiastic about the chances of reaching this type of agreement.
Volodymyr Saprukin from the Kyiv-based Razymkov Center was bluntly dismissive of Yushchenko’s initiative:

“As to signing direct contracts with Turkmenistan – this is not realistic due to various reasons. First of all there is a Russian-Ukrainian contract for gas deliveries and Ukraine cannot even fulfill its obligations to take the specified amounts of gas called for. Therefore direct contracts are impossible because there is no demand for so much gas in Ukraine. On the other hand, Russia will never relinquish its hold on Turkmen gas even though it does not need it today.”

The Turkmen media reported on Yushchenko’s visit to Ashgabat, but did not mention any talks between the two presidents about direct gas contracts.

Commenting on the trip, the UNIAN press service speculated that the hidden reason for Yushchenko’s media hype about the possibilities of direct gas deliveries from Turkmenistan was part of his election campaign. According to UNIAN commentator Mykola Pysarchuk, Yushchenko tried to demonstrate to the “pro-Orange” electorate that he is the only presidential candidate that is willing to stop Russian energy expansionism.

The War in Ukraine and the Growing Risk of Russia’s... END_OF_DOCUMENT_TOKEN_TO_BE_REPLACED

On September 11, Jamestown Foundation Senior Fellow Janusz Bugajski was interviewed by the Polish Naval War Academy regarding his book, Failed State: A Guide to Russia’s... END_OF_DOCUMENT_TOKEN_TO_BE_REPLACED