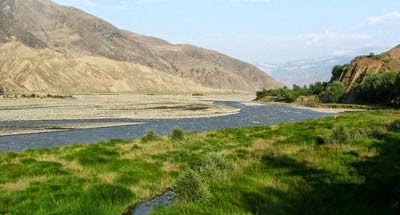 By Paul Goble
The Dagestan-Azerbaijan border has been a troubled one since 1991 because it divided communities that had long been united and left people on one side who felt greater affinity for ethnic communities on the other. But that problem, which many observers had thought was moving toward a solution as a result of talks between Baku and Moscow, has now been exacerbated by another that few had assumed would ever be an issue: water rights.
In 1967, the Soviet government mandated that more water from the Samur River on the border go to Azerbaijan than to Dagestan despite a rapidly growing population on the northern bank. That arrangement continued until September 2010, when the two sides agreed to share the transborder river’s waters equally.  But apparently, that has not ended the problem.
In recent weeks, Dagestanis living on the northern bank have complained that Azerbaijan is using more water than it is supposed to under the accord, something that both Baku and Makhachkala deny.  Ramadan Abdulatipov, the head of Dagestan, noted that the Samur is currently dumping nine times as much water into the Caspian as Dagestanis consume, and he accused those of claiming otherwise of having “dry brains” rather than a dry river (nazaccent.ru, September 18).
But Abdulatipov’s words are unlikely to calm the situation.  For one thing, Dagestanis think they should have first claim on the river’s waters—it originates in Dagestan and flows along the Azerbaijani border for only 38 kilometers of its length. But also they point out that there is no reliable monitoring of how much water the Azerbaijanis are taking out and whether that is related to the declining water levels along much of the river or whether this is simply the result of this year’s drought (nazaccent.ru, September 13).
One of the local leaders of the riparian communities on the Dagestan side told Nazaccent.ru that the nine villages are having problems not only with water for their crops but even for personal use and that they have complained to both Moscow and Makhachkala, but so far without effect. Apparently, he said, other issues between Russia and Azerbaijan are viewed as more important than theirs (nazaccent.ru, September 13).
But there are two other reasons which suggest this issue is not going away. On the one hand, many Dagestanis are concerned about the building of a new reservoir on the Samur, something they believe will keep them from collecting the water they need.  And on the other, tensions between the Lezgins and the ethnic Azerbaijanis on the south side of the river, never easy in recent years, appear to be intensifying.

As a result, disputes about water from the Samur River are likely to exacerbate relations between Dagestan and Moscow, which is not addressing that republic’s concerns in this and other areas. But also, frictions is likely to continue between the two aforementioned ethnic groups inside of Azerbaijan, each of which views the other with suspicion.

The Jamestown Foundation is proud to present a virtual event to... END_OF_DOCUMENT_TOKEN_TO_BE_REPLACED

In this Special Report on the Libya Elections we examine the entrance of militant leaders into the political scene as the country recovers from several decades of Gaddafi’s rule. This 2012 Quarterly Special Report features five articles and a timeline commissioned by The Jamestown Foundation. The report looks ahead... END_OF_DOCUMENT_TOKEN_TO_BE_REPLACED