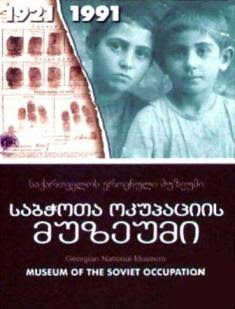 On July 21, Georgian Parliament unanimously adopted a resolution on the Soviet occupation of Georgia and declared February 25 the Day of Soviet Occupation. From now on, the Georgian government is charged with the organization of special events to honor the victims of the 70-year-long Soviet rule. A second resolution, which was also approved unanimously, calls for August 23 to be marked as the Memory Day of the Victims of Totalitarian Regimes. These new initiatives of the Georgian legislation based on multi-partisan consensus are the latest in a series of political decisions that have been made since the peaceful Rose Revolution some seven years ago. The declared goal of the policy is de-Sovietization of Georgia through liberal modernization or, to use President Saakashvili’s metaphor, to turn Georgia into a European Singapore, which he sometimes calls “Singaporization” of Georgia.

In 2006, Georgia joined the three Baltic nations by establishing its own Soviet occupation museum in downtown Tbilisi. The year was purposely chosen to commemorate the 85th anniversary of the Soviet invasion and subsequent annexation of Georgia on February 25, 1921, which aborted Georgia’s first national experiment to become a Western-style liberal democracy.

As for marking the Memory Day of the Victims of Totalitarian Regimes on August 23, the date when the infamous Molotov-Ribbentrop Pact (aka Stalin-Hitler Pact) was signed in 1939, the intention is to both express the solidarity between Georgia’s Eastern and Central European partners and to equate Communism with Nazism. Symbolism aside, many Georgian human rights activists and former dissidents have long advocated for an adoption of a special legislation that would consider the Communist and Nazi crimes equally atrocious, as several former Soviet bloc countries have already done.

The May 30 municipality elections, praised by Georgian and international organizations as meeting international standards for democratic and free elections, have given new impetus to Georgia’s closer diplomatic engagement with the West and more robust transformation at home. The government hopes that a set of socioeconomic reforms aimed at further liberalizing the Georgian economy, curbing the bureaucracy and eliminating the organized crime will help finish the de-Sovietization process and at the same time create new opportunities for a more rapid Westernization.

Based largely on the production of wine, citrus and tea, Georgia’s economy was a “typical colonial economy,” the Georgian president argued on July 21, “serving the needs of the Russian power.” “We have started to reorganize and reorient our economy” to meet the requirements of the highly competitive global markets of the 21st century, he told a gathering at the ministry of agriculture. “We had produced olive oil for centuries, but then the Communists came and uprooted almost the entire plantations of olive trees and planted something else in their place.”

Almost the entire power echelon in Georgia is now filled by Western, especially American, educated officials, and to give more substance to its vigorous de-Sovietization policy, the Georgian government has recently started an ambitious project of recruiting 1,000 native English teachers, mostly from the United States but also from Canada, the United Kingdom and other English speaking countries, to teach the English language in Georgian schools. Some analysts have already dubbed the project Saakashvili’s “linguistic revolution” that would have significant political, economic and social consequences for Georgian society and speed up Georgia’s Westernization process.

Back
Why Is Moscow so Nervous About the Warmi..Next
Back to a Soviet-Ukrainian National Iden..

On August 4, the Jamestown Foundation held a webinar  on... END_OF_DOCUMENT_TOKEN_TO_BE_REPLACED

On September 11, Jamestown Foundation Senior Fellow Janusz Bugajski was interviewed by the Polish Naval War Academy regarding his book, Failed State: A Guide to Russia’s... END_OF_DOCUMENT_TOKEN_TO_BE_REPLACED

The global natural gas industry is undergoing a historical shift away from overland pipeline deliveries of gas and gradually towards Liquefied Natural Gas (LNG), shipped by seaborne tankers designed to supply distant markets which cannot otherwise be supplied by traditional pipelines. Russia, the world’s largest producer of gas, has... END_OF_DOCUMENT_TOKEN_TO_BE_REPLACED